Rook and Pawn vs. Rook Chess Endgames: Building a Bridge 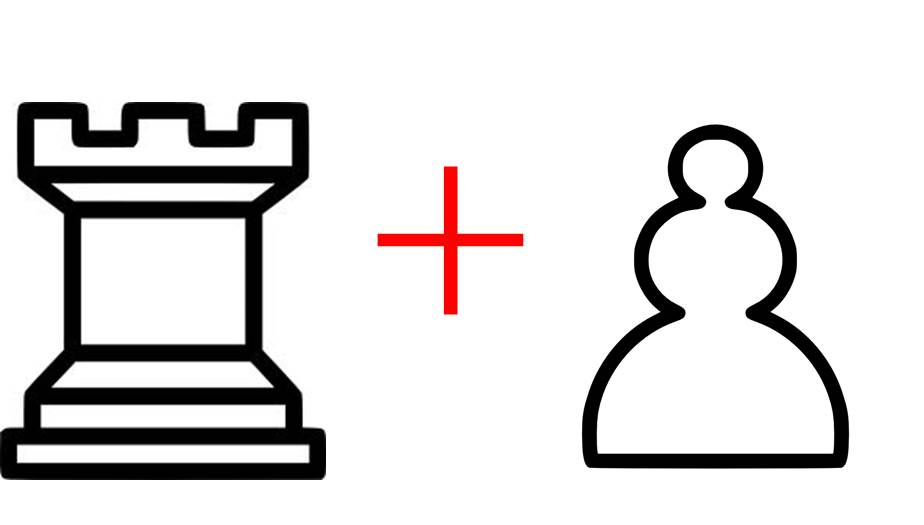 This is one of the very theoretical endgames. All the variations are well-analyzed and known, that’s why it’s called an elementary endgame. Previously I have covered Endgame Strategies and King + Pawn vs. Rook.

Elementary does not necessarily mean easy, it means with the perfect play it will be a predefined win, draw, or lose. You’ll ask me why you need to know how to play an endgame that is theoretically lost for you. Good question. Since this is only a theoretical loss, it’s only a guaranteed loss in a perfect world, such as when playing against a strong computer program armed with Nalimov’s Tables.

When playing against a human mind, there are always chances for mistakes, meaning that you can get lucky and escape with a draw. The more endgame knowledge you have, the more confident you will feel playing the endings and the better results you will have.

Today we will analyze a theoretically won endgame, so-called Salvio position. Let’s take a look at the initial position: 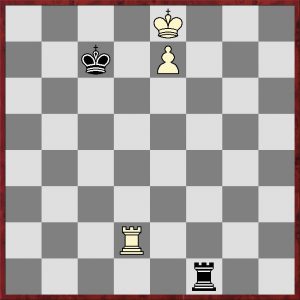 White to move
White is a pawn up and the pawn is already on 7th rank, however white’s King is stuck in front of the pawn and there is no obvious way to make the progress toward promoting the pawn.

Black’s Rook occupies the f-file preventing the King from moving away from the pawn. White’s Rook occupies the d-file keeping the Black’s King away from action. The main goal of White is to promote the pawn and/or exchange rooks in the process. The main goal for Black is to prevent promotion and/or Rook exchange by checking the white’s King and/or capturing the pawn. 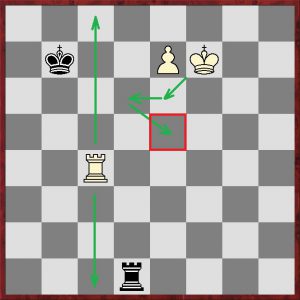 Black to move
So, how do we proceed as White here? White starts out checking the black’s King in order to drive the King away from the pawn and make it possible for white’s King to occupy d7 and then occupies the c4 square. White’s King marches under the checks from the Black’s Rook on e5 and ultimately blocks the last check with its own Rook. At this point the pawn can be easily promoted and the game won. 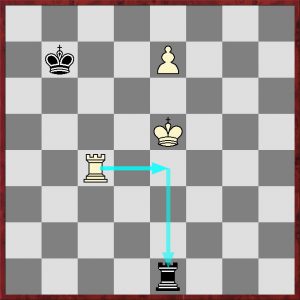 White to move
To see the game scroll down the moves below:

Rules to remember when “building a bridge”:

Now you are familiar with building a bridge technique in Rook vs. Rook + Pawn chess endgame. It is time to practice your skills. I suggest you to setup the initial position against a computer engine and beat it multiple times to get confidence and to be able to play these endgames automatically. After you feel confident in this particular setup, you can try to move the pawn from e7 to f7, g7, d7, c7. Your also need to move all other pieces as well to obtain a similar position and to keep symmetry. Can you win this endgame for white with the pawn placed on other files?

Well explained, but this position is called Lucena not Salvio

Thanks for your lessons, they are very important for my chess

Thanks yury u have been helpful and ur tips made me improve in my games specialy in the third phase of the game ( end games ) in which i had lack in . Keep the good work.

Very nice site but many such as this are not complete on iPad or any ios device because they use flash.
If you would convert to HTML5 it would be very helpful.

Thanks for this website.Al last i found a good chess tutorial website.

first time i have seen this bridge building technique. thanks a bunch.

not “past pawn”, it should be “passed pawn”

Every chess player should know this. This is a nice rook ending indeed.