Endgame Mistakes: Top 5 Ones Most Players Are Still Making 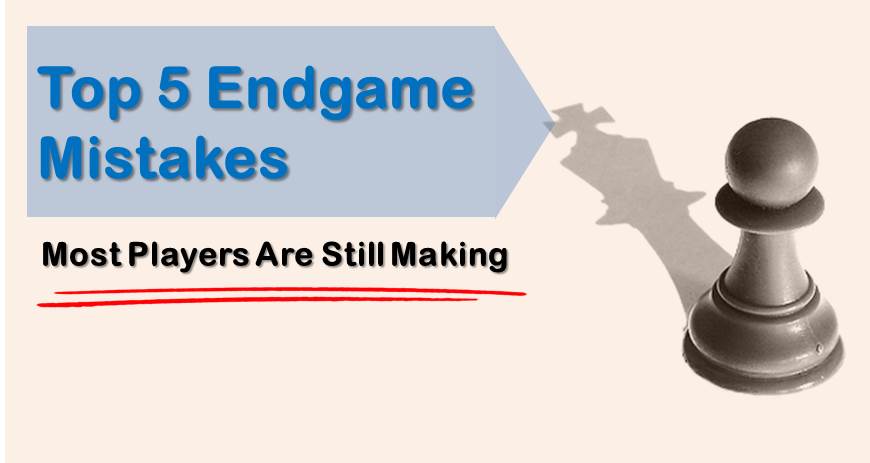 Endgame Mistakes understanding, and what’s more a deep one, is something that especially separates masters from amateur players. Surprisingly, the majority of chess players do not pay enough attention to this very important part of the game and concentrate on other aspects of chess. Number one chess player and World Champion Magnus Carlsen attributes a big part of his success to in-depth endgame understanding and to the ability to play simple positions very precisely.

1. Endgame Mistakes: Not centralizing the king early in the game

One of the most common and probably the deadliest of all endgame mistakes is not centralizing the king early enough. Often even a single extra tempi turns out to be a decisive factor in the King and Pawn ending. It is hard to define an exact rule that tells us when it is the right time to centralize the king.

In simple words, you should centralize your king as soon as it becomes safe. There are no pieces limit after which it becomes safe to centralize the king. You need to use your own judgment to decide the right time and should start centralizing the king, even before major exchanges take place.

In the position below the material is equal, but white is two tempos behind. It may not be significant in the opening or middlegame, but makes all the difference in the endgame, because white is not able to stop the black’s king from entering the queen’s side and capturing b and c pawns. 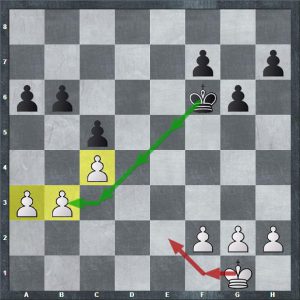 Note:
In the endgame package of our comprehensive training course, we focus extensively on the most important endgame elements of chess. One of these elements is, indeed, the opposition.

To learn how you can fully employ this powerful weapon to win and save endgames we suggest you to sign up for our training course. It already helped more than 1,000 chess players around the world to achieve their chess goals. Don’t wait; you may be the next champion!

2. Pushing the pawns at the wrong time

This is another very common mistake that is often seen on an amateur level. Most players prefer to push their pawns before advancing the king. That is understandable from a logics point of view, they want to promote sooner.

But in chess, like in life, the faster-looking route is often not the right way to go. By pushing the pawns without the proper support of the king, you are letting your opponent advance his king and obtain control of the game.

As a rule of thumb (for king and pawn endings), you should remember to advance your king first, and only then push the pawns. Indeed, there are exceptions to that rule. For example, when you can promote the pawn and the opponent cannot interfere with that, there is no need to support it with your king.

In the position below white spend valuable tempos pushing f and g pawns without supporting them with the king. As the result, black was able to advance his king to c6. The big treat is …Kd5 threatening pawns on both sides of the board. White cannot defend it all and will soon be defeated. 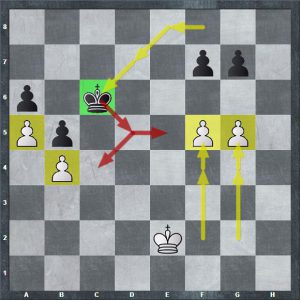 Exchanges in chess are not as straightforward as trading pieces for pieces of the same or greater value. Understanding why you should or should not exchange certain pieces becomes especially important in the final stage of the game. Your decision to keep or get rid of certain pieces can make or break the game.

Most amateur players start thinking about how to exchange pieces quickly when they feel pressure. Surprisingly enough, by releasing that pressure they may step into the tracks of losing position.

The position below is a good example of that concept. Black is a pawn down in the rook and pawn endgame. Technically, this position is a draw, and with a correct play, black should not have a very hard time achieving equality.

However, black felt that he was losing because he is a pawn down and decided to simplify by exchanging the rooks. That decision cost him the game. After 1… Rxd3+?? 2. Kxd3 Kd7 3. Ke4 Ke6 4. e3 black cannot stop white’s pawn from promoting. A simple move like 1…Ra7 avoiding exchanges would lead to a draw. 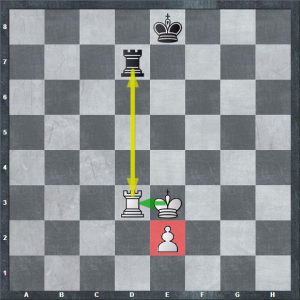 Another common endgame mistake occurs when a player starts pushing his pawn quickly towards the promotion square without fully calculating the variations. He has looked at the position briefly and decided that he will promote first and win the game without taking time to fully check the variation.

In the position below both white’s and black’s pawns are about to promote. White saw that he will promote first and did not calculate the entire variation to save time on the clock. He played quickly 1. a6?? h3 2. a7 h2 3. a8=Q h1=Q+ checking the king and winning the queen and the game. White missed that check because he did not analyze the variation completely. He, however, had a chance to win the game with a simple 1.Ke4 catching the pawn on time. 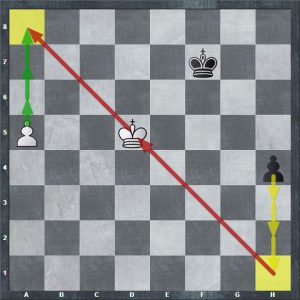 Many amateur players do not fully understand the importance of obtaining the opposition and that causes them to lose many otherwise drawn games. The game below is a perfect example of that. In order to draw this ending black simply needs to obtain the opposition by playing 1…Kf6.

After that move, the game will end in a stalemate because white will not be able to make progress with his king and would have to push the pawn.

However, black did a common mistake and played some other move 1…Kf7??. After 2. Kf5, white has opposition and will win that no longer drawn ending. 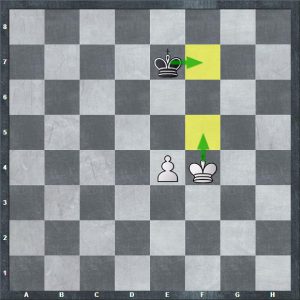 Hi Barry, yes Ke4 is winning for white. The changes were already made in the article, but your computer/phone most likely stores an old copy in memory. Please reload the page, and you will be able to see the changes. 😉

Illustration on item 5 is same as first one and does not fit narration. Item 4, you say white could have drawn with Ke4, yet this move is in fact a forced win for white.

Good point, wrong diagram was loaded. Now it is fixed. You might need to completely reload the page to see the effect. 🙂

#5 Opposition makes no sense as the diagram presents a position where text moves are impossible.