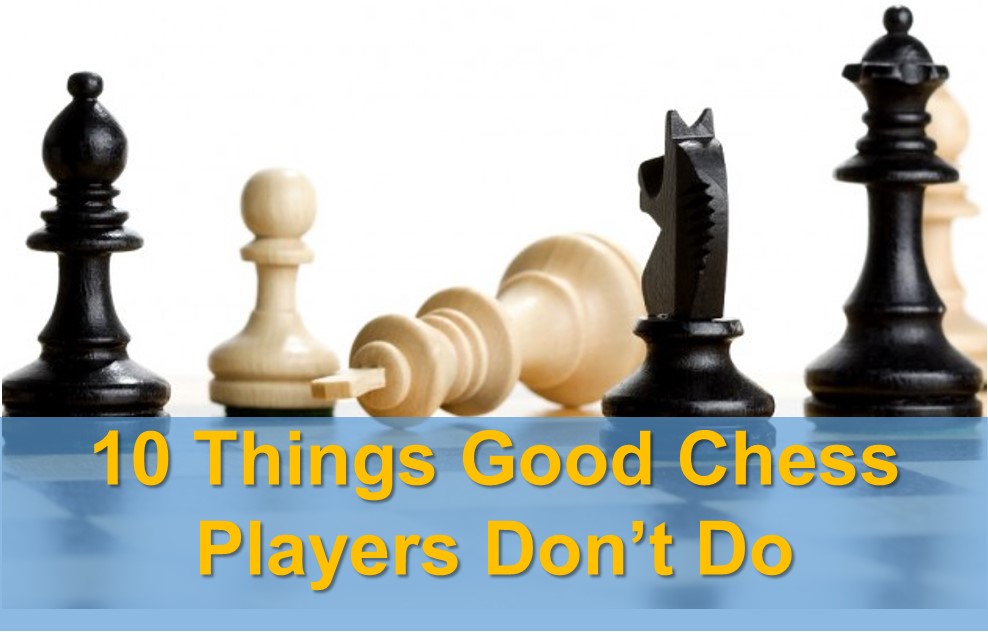 These are easy to avoid and pretty intuitive things but somehow many chess players miss them. Just keep these things in mind and you will make it!

There are many people that will try to discourage you from whatever you are doing. They will say something like you cannot become a chess master (or FM, IM, GM) because you are just 1300 rated (or you’re too old, or you don’t have a chess coach, etc.) Most people will say that you cannot do something when, in fact, they cannot do it themselves.

Remember, if you believe in yourself, have proper motivation, even if you are only 1300 rated, you can become an FM with a right persistence, dedication and training.

First, people will doubt you and ask why you’re doing that? Then they will ask you, how did you do that?

Good chess players do not make excuses about why they’ve lost a game or why they cannot spend time solving tactics today. Things like ‘it was a blunder’, ‘I did not feel well’ or ‘my opponent just got lucky’ are off the table. Instead, they find real cause and take action.

3. They don’t get frustrated by chess related criticism

Good chess players do not get aggressive or upset when someone suggests a better move they could have played, or that their sacrifice wasn’t sound or the opening line they play is weak. Instead, good players learn from that criticism and improve their chess.

4. They don’t look for training shortcuts

Good chess players understand that there is no substitute for hard work. Yes, you can hire an expensive coach or buy a training course that will guide you through your improvement journey. However, all heavy lifting is on your shoulders.

Neither a great chess coach, nor the greatest chess training course in the world will help if you do not get fully engaged. Good chess players understand that better than anyone and work hard on improving their game. Then the results come.

5. They aren’t afraid of stronger competition

Good chess players know better than anyone that playing against stronger players is the right way to go if you want to improve at chess. They don’t afraid to play against players 300-400 points higher rated.

Yes, they might and probably will lose, but they will get something very valuable in return: experience and a good lesson.

6. They don’t give up even under extreme pressure

Good chess players do not think of resigning even when they are under serious pressure. If they are a rook down and the position is unclear they will still try to win the material back, to deliver an attack with a mating threat or at least to give a perpetual check.

Good chess players perform better when they are losing. They know they have nowhere to step back and they have to go out there and do their best to save the game.

Good chess players are confident enough that they do not need to offer a draw in an equal position. They believe in their own chess skills and in ability to outplay an opponent in equal looking position. Chess is a sport, the mistake can be made any second and the otherwise equal looking position can immediately turn into a losing one.

Good chess players know it and use it to their advantage.

8. They aren’t afraid to take risks

Good chess players do not afraid of taking risk if they see an opportunity. If there is a sacrifice which promises some sort of significant advantage, they will calculate all the variations, evaluate the position and decide if it is worthwhile to go for it.

If the position looks favorable a good player will sacrifice, since he is confident and believes in his calculating skills and intuition.

9. They don’t interpret losing as failure

Good chess players do not think of losing as of failure. They think that losing is an opportunity to improve their game, and to learn something valuable, something that cannot be learned in any other way.

The only way to become good at chess is to lose enough games, draw conclusions and take action towards eliminating your weaknesses. Without losing, one cannot master anything, chess is no exception.

10. They don’t hesitate to give good advice to other players

Good chess players don’t hesitate to give a worthy advice to other players especially those lower rated. If they feel that their advice is easy to follow and it will greatly help another player, why not go ahead and offer help?

Excellent Advice. I must admit that I am sometimes guilty of 1 and 3 in the past. I must learn to always be confident in my ability and my approach to the game regardless of what other people say about me.

If you look at that list you will find lots of strong Grandmasters who unfortunately are no good players.