Top 5 Types of Forks Every Chess Player Must Know

Today we will talk in detail about one of the most important elements of chess tactics, a fork. A fork is a type of tactics when one piece attacks two or more of the opponent’s pieces at the same time. As a result, usually, one of these pieces is won. It is one of the most common tactical elements in chess, and many games are lost by those who have missed one little fork. After studying this article you won’t be one of them

Knight is a truly unique piece due to its ability to jump over other pieces. It is impossible to stop the knight’s check, without capturing the knight or moving the king itself. That feature makes the knight a perfect forking piece. Take a look on the example below, where the black knight forks white’s king and bishop. This type of fork is especially forcing due to the check by a knight. The king has to move and the bishop is lost. 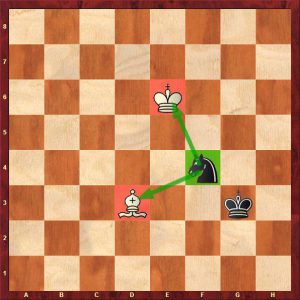 You may feel that knight forks are easy to find, but it’s not always the case. Take a look at the example below. There is no immediate fork, but it can be constructed. Let me show you how to think in cases like that.

Notice how white knight attacks the f6-pawn which can be captured with a check. Also notice that it is being defended by the black’s knight, which in turn is protected by the bishop and threatened by the white’s rook. Now imaging that instead of the knight there is a bishop on e7.

Then you can capture the f6-pawn with a knight, forking the king and bishop and winning it. Do you see a way to achieve that? Exactly, you need to play 1.Rxd7 and after Bxd7 2. Nxf6+ and 3. Nxd7 winning the bishop. 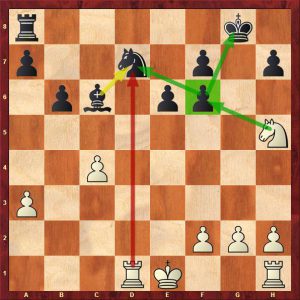 Rook is not only can be used to control the ranks and files but also to fork opponent’s pieces. In the example below black’s rook is forking white’s king and knight resulting in capturing of the minor piece and winning the game. 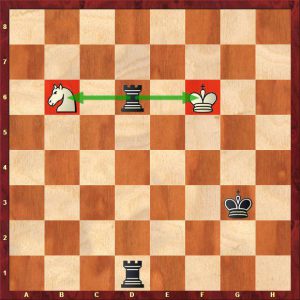 Queen is the most powerful piece, since it combines powers of both the rook and the bishop. That makes it a very good attacker. In the example below black’s queen forks three of the white’s pieces at the same time ultimately winning the game. 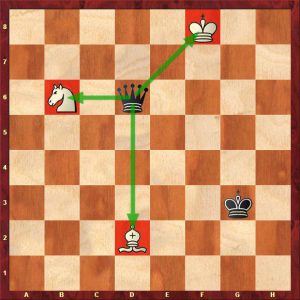 In order to be proficient at finding tactics such as forks, smothered mates, checkmates, pins, and skewers you need to solve problems on daily bases. If you are aiming for a serious progress, consistency is the key. Sure you may skip a day or two here and there, but the point is to work on tactics at least for 20 minutes a day everyday.

Once you’re doing that, you should throw positional training, endgames training, and attacking training into the equation and the success is almost guaranteed for you! Things can be a little confusing though, but don’t worry we tried to make learning chess as easy as possible, by creating a step-by-step, day-by-day training program that will help to take your chess to the next level.

Even though the pawn is the least valuable unit, it can surely deliver a fork. In the example below, the pawn is forking white’s bishop and knight, drawing the game. 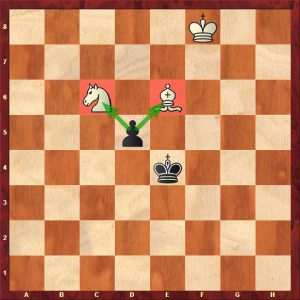 Bishop is a great long range piece, and it can fork pieces located on the same diagonal. In the example below the bishop forks white’s king and rook. 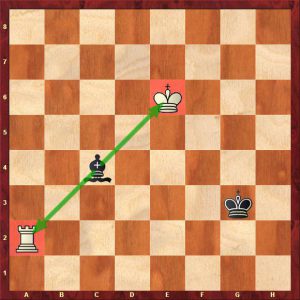 Let’s take a look at the example from real game. We notice that the black’s bishop is interposing the attack on the rook and king via d5 square. It is protected by both the queen and the knight. Is there way to get rid of both defender in one move? Here it is: 1. Qxe7! Qex7 2. Bxd5+ Kf8 3. Bxa8 and white is winning after he exchanges his queen for 2 minor pieces and a rook.

Yes, the king is also an attacking piece and can deliver a fork winning a piece, if someone does not know how to checkmate with a knight and bishop correctly. 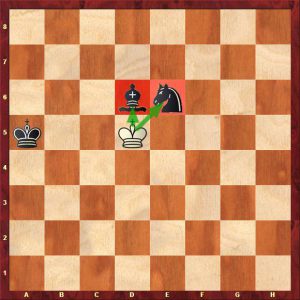 You just listed every piece and added “Fork.” I thought this would be about some special fork themes like the Qa4 fork or the Nf7 fork or the Nc7 fork or the centre fork, etc.