5 Most Important Principles of Chess Thinking 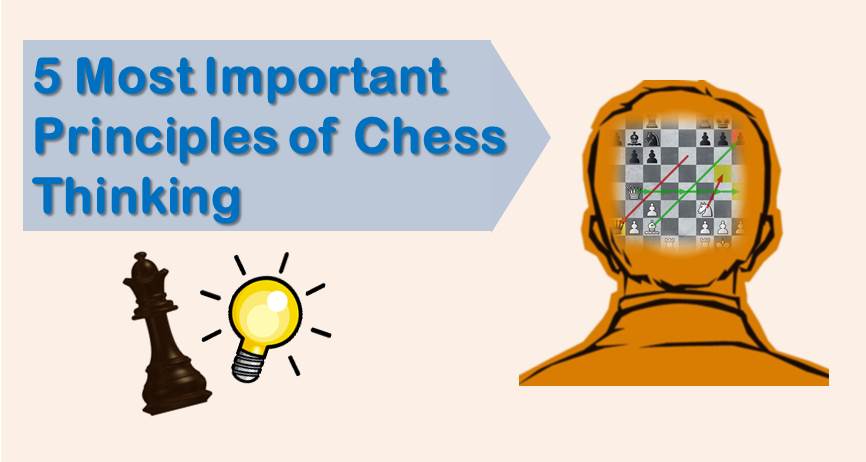 We have covered many different chess topics from openings to middle games, from attacking chess to defense, from positional understanding to game winning sacrifices. Something that we did not focus specific attention on is the key thinking principles that many strong players employ over the board, and thus win games against those who don’t. Today we will cover five fairly simple, but very important principles of chess thinking.

1. Always expect your opponent to make the best move

This is one of the most important chess principles. Many amateur players make a big mistake by “assuming” or “hoping” that their opponent will miss the best response. It may be the case sometimes and the opponent may blunder, but counting on that in your games is not a good idea.

You should always assume that the opponent will make the best, most unpleasant move. Then you need to come up with a plan of how to deal with it. That is the only winning attitude.

Let’s take a look at the position below. Black saw that his king is in danger. But temptation to get a “free” pawn was stronger. He played 1…Qxa2 hoping that white will miss the winning combination. White did not. He responded with 2.Bxh7 and after 2…Kxh7 3.Qh4 followed by Ng5 wins the game.

Lesson to learn: never hope that your opponent will miss the best move. 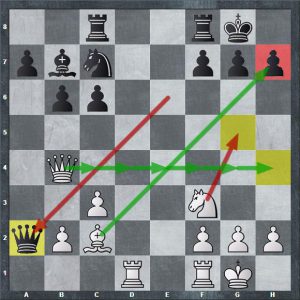 2. Avoid making moves with no purpose

This is another very important chess principle that is applicable to literally any chess position. Every move you make should have an idea behind it. Otherwise you are simply giving away tempos and waiting for your opponent to start an attack (and that’s something we want to avoid).

In the position below white has undeveloped bishop and separated rooks. Nevertheless, he proceeds and wastes two tempos with unnecessary prophylactic moves such as a3 and h3. Instead he could’ve played Ndf1 followed by Bg5, improving his position. Now black will play 1…c5 with initiative. 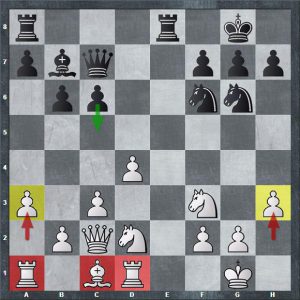 Lesson to learn: always have a plan.

In sharp positions material becomes irrelevant because if you get checkmated it does not matter if you are a rook up. Many amateur players make the mistake by evaluating tactical positions from the material point of view.

In our comprehensive training course we teach to evaluate “quiet” and “tactical” positions in completely different ways. Elements that are important in “quiet” positions become irrelevant in razer-sharp tactical ones. Learning how to evaluate positions correctly is a very important part of chess mastery. That single skill by itself is something that separates masters from the rest. Click here to learn more about our training course and to start improving your evaluation of positions skill.

Let me show you what I mean in the position below. White is way behind in material: he is down a rook and two minor pieces. But since the position is very sharp and tactical that is completely irrelevant. It’s white to move and that’s what matters. There is a forced win for white here. Do you see it? Exactly. 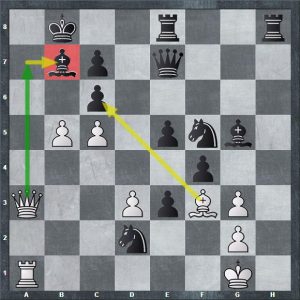 Lesson to learn: do not evaluate sharp positions the same way as quiet positions.

The art of exchange is an important part of chess. Knowing when and what pieces to exchange can make all the difference in your game. It is important to visualize the changes on the board that will happen after the exchange takes place before actually making that exchange.

Here is a good example. White offered the rook trade. Black is a pawn down, if he trades rooks, he will end up in a lose king and pawn endgame due to the white’s queen side majority. That’s why black correctly avoids the trade playing …Rd6 and having all the chances to draw the game. 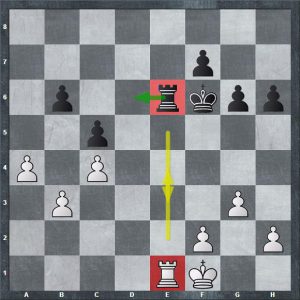 Lesson to learn: evaluating consequences of exchange before it actually occurred will help you to win and draw many otherwise drawn or lost games.

Sometimes, when you have a better position, you have a choice between winning simpler and in the greater number of moves or taking a risk and going for the mating combination right away. If you keep up with our articles, you already know the right way of doing things. Taking unnecessary risk puts in danger your chances of winning the game. You may easily miscalculate and end the game in a draw instead of winning a “dead won” position.

In the example below black is a pawn up and can easily exchange off all of the pieces and win the game. Another possibility is to exchange just the rooks and start an attack with bishop and queen. That is in fact incorrect approach. White played correctly and after 1…Rxe3 2.Kxe3 Bxf3 3.Qxf3 Qxf3 4. Kxf3 ended up with a winning ending. 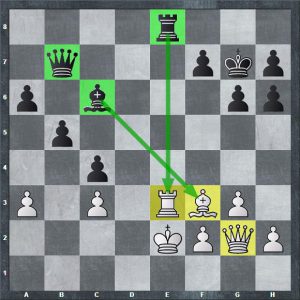 Lesson to learn: chose the simplest and the most straightforward way to finish the game.

To learn about these any many more middle game ideas in greater detail with examples from real Grandmaster games and step-by-step explanation enroll in our comprehensive training program.

Good catch, Jason! It should be [b]Ndf1[/b], thanks for noticing!