7 Signs You Have a Potential for Becoming Grandmaster at Chess 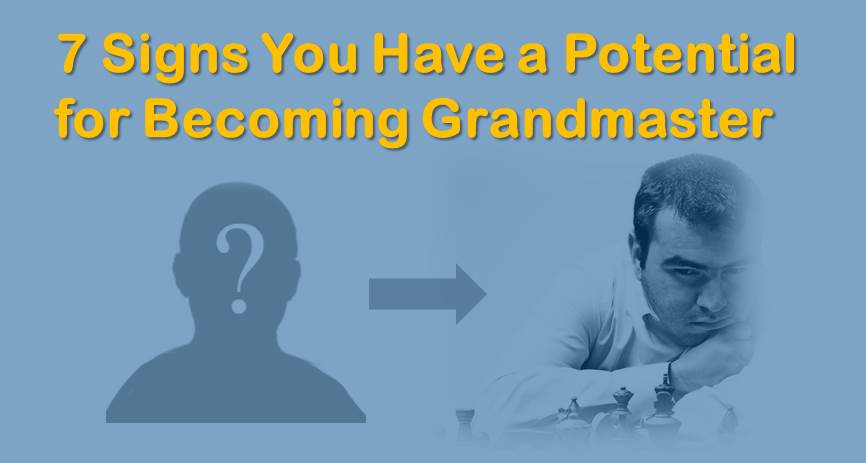 Many chess players wish to know if they will ever become Grandmasters. There are many exams available that can estimate your current strength, but none can tell you whether you can become a GM or not. Today we have compiled a short list of very important signs that may suggest you have a real potential for obtaining the highest chess title. Curious to find out if that’s about you? Read on!

How to become a Grandmaster 1. Well-developed chess intuition

All grandmasters have a well-developed chess intuition. That means even without analyzing the position, GMs already know what’s happening on the board, what side is winning and what move each player should play.

That won’t be a 100% accurate analysis, like you will get if you calculate all of the variations or plug in the position into an engine. Nevertheless, it is a fairly accurate evaluation that can be used to make decisions during the game.

Another sign that you have a well-developed chess intuition is ability of guessing GM’s moves during the game. It is very easy to check. Start watching any high level chess game and try guessing what moves one or another player will make. If the percentage of the moves you’ve guessed correctly is high, congratulations, you already may have a well-developed chess intuition.

How to become a Grandmaster 2. Great memory for chess positions and patterns

Another very important thing for a strong player is a good memory for chess positions and patterns. Many grandmasters keep 100s if not 1000s of classical games in their heads.

Ability to memorize positions and games is extremely useful when it comes to preparation of openings, endgames or playing a typical middlegames. Grandmasters remember many classical games dealing with all sorts of pawn structures, endgames, tactical motifs, weaknesses, attacking schemes and so on.

If you have a good chess memory, you can put yourself a big plus on the potential grandmasters’ checklist.

How to become a Grandmaster 3. Superior visualization skills

Visualization is probably the single most important skill that a grandmaster needs because it is directly related to tactics. Without the ability to visualize positions, after certain moves are made and some pieces are captures, it is next to impossible to become a strong tactical player.

Visualization skills help tremendously at finding the correct tactics, calculating lines, planning the game and even finishing off the simple endgames. If you have strong visualization skills, your chances of becoming a grandmaster are much higher than for those who don’t.

How to become a Grandmaster 4. Ability to work on chess for hours

Even if you have all necessary prerequisites for becoming a grandmaster, you won’t become one unless you spend a lot of time working on chess and perfecting your game. You see, even the most gifted chess players such as Magnus Carlsen, need to spend years to develop their talent.

That’s why the ability to work on the game consistently, without getting bored and tired is crucial for becoming an elite chess player.

How to become a Grandmaster 5. High level of competitiveness

Without a high level of competitiveness and a strong drive for becoming a better chess player it is not possible to progress. Some of the most competitive chess players such as Bobby Fischer and Garry Kasparov are also the most successful ones in history of the game.

If you want to become a grandmaster you must be competitive, you must try to win every single position against every single opponent you face. You should take each defeat as an opportunity to patch your preparation holes, to return and win.

How to become a Grandmaster 6. Ability to stay focused for extended periods of time

Chess matches can be long, extremely long. Any grandmaster has played games which lasted for 6-7 hours non-stop. These kinds of games are exhausting and drain you both mentally and physically. In order to win such games you need to preserve energy and stay focused for the whole time. Any mistake can end the game not in your favor.

If you want to become a grandmaster you should be able to stay focused for very long periods of time. You need to learn making the best moves, even when you’re tired or totally exhausted. Only then you can win games against stronger competition and be on your way to breaking that magical 2500.

How to become a Grandmaster 7. Ability to perform well under pressure

It is a fact that defending in chess is much harder than attacking. There is a lot more at stake when your king is under pressure. You can get checkmated and the game will be over instantly. Any chess player ends up in terrible position sooner or later. It takes a true talent and courage not to give up and to pull yourself out of the losing position.

It is not possible to become a grandmaster without the ability to save lost games. You need to learn playing your best chess under pressure, even when you are down in material or under a serious attack. That will save you many games, and will gain you plenty of rating points.

Is it enough for becoming a grandmaster? It is no way to know. But if you can do it, the chances are you can become a GM someday.