Chess Pieces: How do they move? Complete Guide 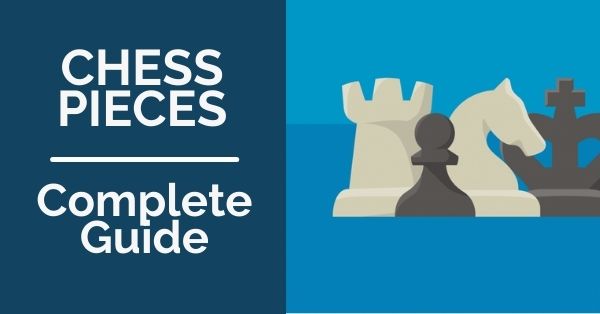 Chess pieces (chessmen) and a board is the essential part of each chess set.

If you have decided that you want to start learning how to play chess, then you need to get yourself a chess set. The board has 64 black and white squares and on it, you will need to set up 32 pieces.

Let’s now see how each piece moves and what you need to know in order to start playing your first game of chess!

The pawns can only move forward. Once you’ve moved them, they can never go back and this is why masters give pawn moves special attention. Even though they are only worth one point, they are very important during a game.

For example, a “wall” of pawns can protect the king very well. Just as well, a marching pawn chain can be very dangerous in the attack.

The pawns move slowly – only one square at a time, except when they stand on their initial square (2nd or 7th rank, respectively). Then and only then, the pawns can move two squares forward. Once you’ve moved them, they can never advance two squares at a time again. For example: 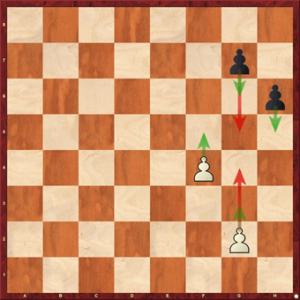 As you can see, here the pawns on g2 and g7 can choose between advancing one or two squares in front. However, the pawns on f4 and h6 can only advance one square, to f5 and h5 respectively.

Although they move in a straight line, the pawns can only capture in diagonal. In this case, too, they will only move one square at a time. If an enemy piece is placed in front of our pawn, then that pawn is blocked and won’t be able to advance until that square is vacated. For example: 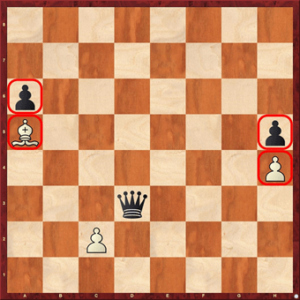 The only pawn that can move in this position is the one on c2, who can capture the black queen on d3. The rest of the pawns are blocked. Neither the pawn on h4 nor the one on h5 can move right now, as they are placed in front of each other. The pawn on a6 can’t advance either, as the white bishop on a5 is blocking it.

If you thought pawns are worthless, think again! Pawns are the only pieces that can transform into any other piece, except the king and, of course, a pawn. To do this, you have to reach all the way to the other side of the board – 8th rank for the white pieces and 1st rank for the black ones. When you do so, you have the right to replace the pawn with any piece you like.

It doesn’t matter that you already have that piece on the board, you can get another one.

The most common choice is, of course, the queen, the most powerful piece on the board. To do this, you simply remove the pawn from the square it was on and replace it with the piece of your choice on the exact same square that the pawn arrived on. For example:

Here the black pawn has made it all the way to d1; black decided to get a queen instead and in the second diagram you have the position with a queen on the board, place on the exact same square the pawn was on – d1.

You can get as many queens as you want. Theoretically, you could have 9 queens on the board. In practice, that should be very difficult to achieve though.

Another special move of the pawn is en-passant or passing by.

This move is meant to avoid situations where two rival pawns never meet each other. Imagine that white has a pawn on d5 and black would just go right past it with his pawn from e7, jumping directly next to it, on d5.

These pawns would never meet each other, hence never get the chance to capture each other: 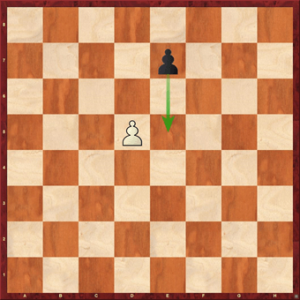 So, here and only here, white can take en-passant: the pawn from d5 can go to e6 and capture the black pawn (which would be on e5):

This is how the board would look like after the capture. Two important things to remember: you have only one move to decide whether you want to take en-passant or not – right after your opponent has moved the pawn two squares in front, past your own.

If you make another move, you are not allowed to change your mind on the second move and take en-passant. Secondly, you can only make this move if the pawn starts from its initial position and moves two squares, landing right next to a rival pawn.

You can’t do the same if the pawn moves only one square in front. Let’s take the same position as before and imagine the black pawn started its move from e6 instead of e7:

In this case, the white pawn from d5 can no longer take en-passant.

The knight is one of the trickiest pieces on the chessboard. When it moves, it creates the shape of an L and can jump over other pieces, both black and white. To create the “L”, you will move two squares straight then one square to the side: 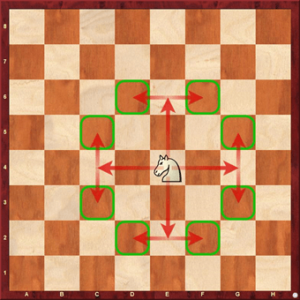 You can also think of it moving one square in any direction (up, down, left, right) and then one square diagonally. In this case, you would create the same “L” shape like this: 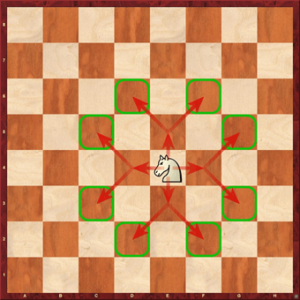 As mentioned before, the knight can jump over other pieces and is the ONLY piece that can do so. For example: 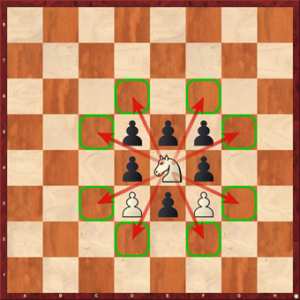 Even here, where other pieces surround the knight, it can still move to the same squares as before. One thing to remember is that knights are better placed in the center. From a central square, a knight can jump to 8 other squares. Compared to this, a knight in the corner can only jump to 2 squares.

The knight captures in the same way as it moves. If there is an enemy piece on the square it lands on, that is the piece the knight will capture and you will take it off the board. Remember that the knight will NOT capture the pieces it jumps over! 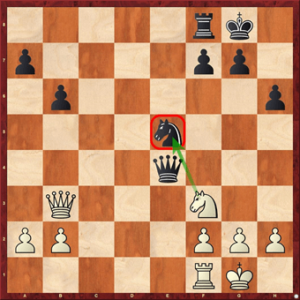 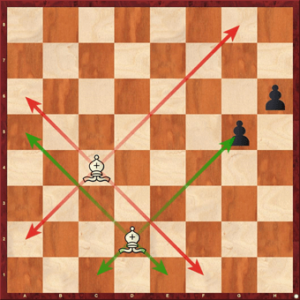 Here you can see all the squares the two white bishops (light and dark-squared) can move on.

The bishops capture in the same direction – diagonally, without jumping over other pieces and keeping the color they started on. 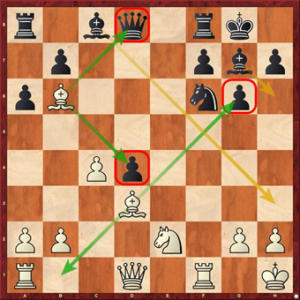 In this position, we see that the white bishops have a few things they can capture: the one on b6 can capture either the black queen on d8 or the pawn on d4. The one on d3 could take the pawn on g6. The black bishops, on the other hand, have no piece they can capture, but can move in the highlighted directions.

The rook can move vertically (on files) or horizontally (on ranks) for as many squares as possible, backward or forward, and cannot jump over other pieces! 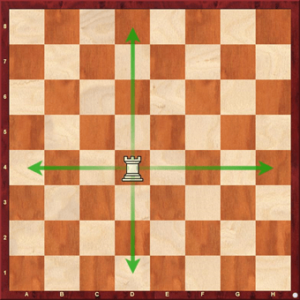 If a rook meets a rival piece in the direction it can move on, then it can capture that piece. Again, remember that the rook can’t jump over pieces, which means it can only capture one piece at a time! 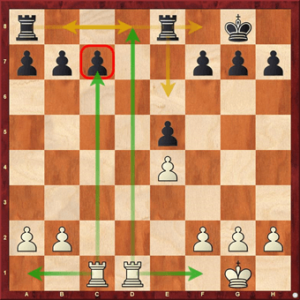 Here only the rook on c1 can capture an enemy piece – the pawn on c7. The rest of the rooks can still move, but only on the highlighted paths.

The Queen is the most powerful piece on the board for a very good reason – it can move in any direction – diagonally, vertically, or horizontally, both forward and backward. It cannot, however, move in the shape of an L, as a knight, and is not allowed to jump over other pieces. 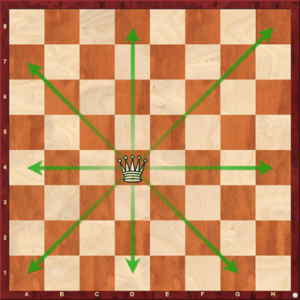 The queen can capture any enemy piece that is placed in the direction it can move: 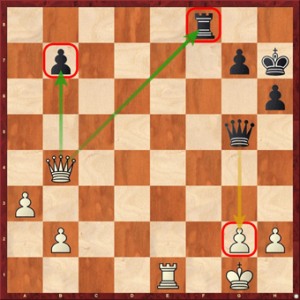 Here you can see all the pieces the two Queens can capture. The white one can choose between the Rook on f8 or the pawn on b7, while the black one could only capture the pawn on g2.

The King can also move in any direction, but only one square at a time: 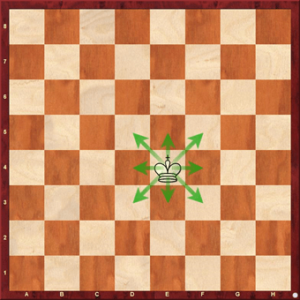 Although it is not a fast piece, the King can also capture enemy pieces, if there are any at sight. For example, here the white King could capture the Black Knight or move to any of the highlighted squares: 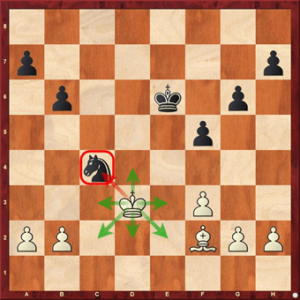 We also recommend reviewing the Rules of Chess: The Complete Guide for New Players.