7 Most Common Middlegame Mistakes That Most Players Make 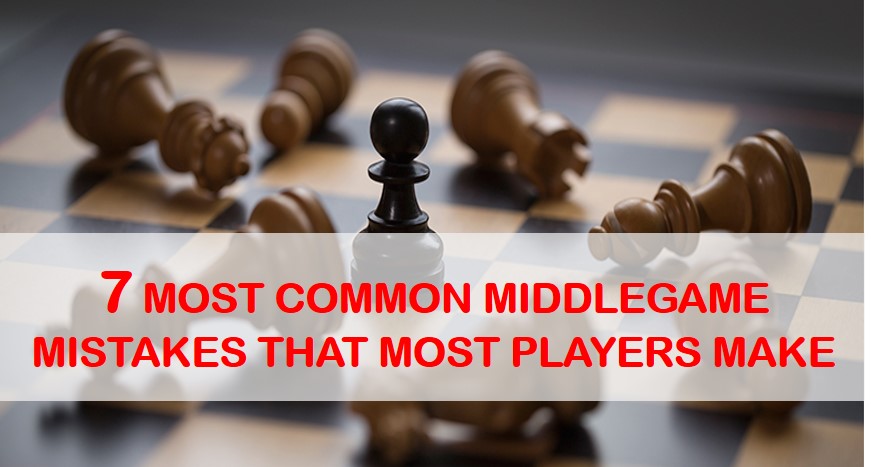 Middlegame is a very important part of the game. It is not only important because that’s where the majority of the games get decided, but also because understanding of the middlegame is directly proportional to one’s rating. Many chess professionals suggest spending more time on fundamental middlegame understanding, for improving your overall chess. Today we will take a look at 7 most common middlegame mistakes that most players make.

1. Committing to a not optimal pawn structure

Choosing an optimal pawn structure after the opening is one of the biggest decisions you have to make in the middlegame. The pawn structure decides how the game will progress. For example, closed pawn structure would mainly mean a slow, maneuvering type of game.

Open pawn structure will most likely mean a sharp, attacking game, with plenty of tactics and surprises on the board. Most openings have a well determined plan for both sides. Some are meant to be tactical, while some are very positional. It is not a good idea to make changes in those things. Based on the opening, an optimal pawn structure should be selected. It is typically a mistake to commit to an “incorrect” pawn structure, which would generally mean you’ll end up with an inferior position.

This is another very common mistake that can be seen often on under 2200 level. Players may not be very familiar with certain opening lines, and due to the lack of experience they are not completely aware of the plans for both sides. That, in turn, leads to pieces not being placed on good defensive or attacking squares.

When you decide where to place a piece, you should have a clear understanding of why that is the case. Otherwise, with random positioning of the pieces, it is very hard to launch a sound attack or to play a solid defense. When you are deciding where to place pieces, always think ahead and have a plan.

One of the main differences between strong and weak players, is that the first category knows well which chess pieces to keep and which to exchange. Unfortunately, the weaker players don’t have a well-developed intuition that helps them to decide on exchanges. As a result, they often exchange their good pieces for inferior opponent’s pieces. That leads to further weakening of the position, reducing the attacking and defensive potential.

Pawn break is something that can make or break your game. A well calculated break can cause serious damage to opponent’s position, leading to a powerful attack on the king. A badly calculated break can have just the opposite effect. Not only it won’t do you any good, it will help your opponent to get an upper hand.

The trickiness of the pawn break is that it should be perfectly timed. If you don’t prepare and just play it, you are risking to lose the pawn with no compensation whatsoever. If you over-prepare, you are losing valuable time and letting your opponent to counter the threats.

5. Ending up with inferior minor pieces

All chess players have to make a decision what minor piece to keep: a knight or a bishop. Many players know that the knight is a favorable piece in closed positions while a bishop is stronger on the open board. That is however not always accurate.

The position may look closed, but after a pawn break and series of exchanges it may suddenly become an open field. If you choose to keep the knight beforehand, you’ll end up with an inferior piece and your endgame won’t be a walk in the park.

That’s why when choosing what minor piece to keep, you should anticipate how position can change in the near future.

How many times we felt bad for not paying attention to the back rank mate or did not have enough time to make an escape square for the king?

It happens a lot, and not many players are good at anticipating the upcoming threats and playing prophylactic moves beforehand. Players typically think that it is fine to keep the back rank undefended, or a piece hanging and spend those moves on something presumably more active and important. Little do they know, that these minor things can give a rise to a disaster. Instead of winning a queen, you will get checkmated, just because you did not play a simple pawn push 5 moves earlier. Always try to anticipate problems and deal with them before they arise.

Neglecting the king’s safety is something closely related to prophylactic moves. It is in the league of its own, because of the level of importance. The point of chess is to checkmate your opponent, keeping your own king safe at the same time. Chess is not a sprint, but rather a marathon, and that’s why it is a must to make sure that your own king is safe. It is wise to spend an extra move or two to make sure you pawns and pieces are properly set, and your king is safe.