Extraction of The King 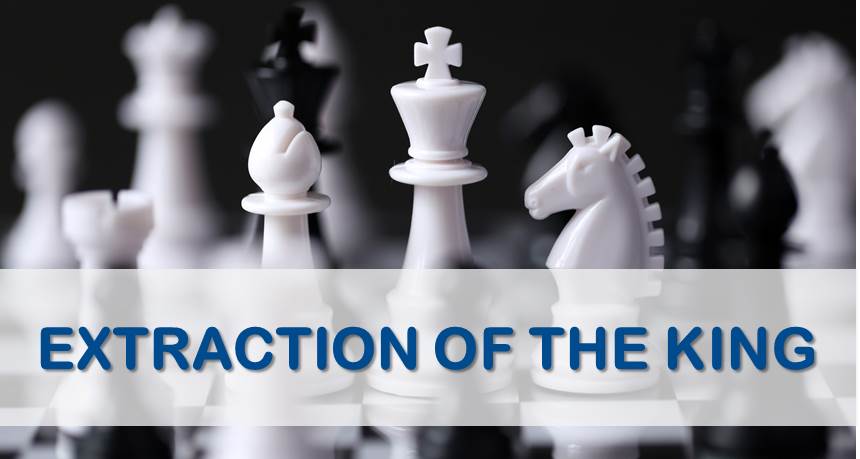 Winning a great attacking game can definitely give any chess player great satisfaction. However, it’s not always easy to go after the opponent’s king and find an efficient mating idea. Many attacks emerge right after the opening and are based on the opponent’s undeveloped pieces and un-castled king.

In this case, it should be easier to open up the king and keep it stuck in the center. When our rival gets to castle, on the other hand, we have to get creative and find other ways in order to break the defense of his monarch. For this, we usually use sacrifices.

Giving up a piece to open the rival king is a common idea and most chess players are familiar with the typical sacrifices that can occur in a game. We have already covered the most important ones in previous articles, so make sure you take a look at those as well.

Some of those, such as the sacrifice on h7 (also known as the Greek Gift sacrifice), the double bishop sacrifice, the sacrifice on f7 (square that’s known as Achilles’ heel) or even on e6 can be used to destroy the castle. Sadly, our opponents might have studied this subject as well and know how to avoid these typical tactical blows. In this case, new ideas and plans are required.

The material sacrifices used in order to lure the enemy king out of his hiding usually end up with it being chased all the way to the center of even further away, where it gets mated. There are no strict rules concerning these sacrifices. Sometimes, even the lines are so long it’s difficult to calculate all the way to the end and you have to rely on your intuition.

For such a sacrifice to work, you can rely on the general guidelines we have previously presented in our articles, such as better piece cooperation, development advantage, space advantage, weakened king and so on. We’re going to show you next some brilliant tactical games where the king is forced to go on a “stroll” behind the enemy lines, where it gets mated.

The first game we chose is a classic played between Eduard Lasker and George Thomas and many of you might know it already. Even so, it is worth seeing again and trying to assimilate the attacking and mating ideas behind white’s beautiful queen sacrifice. Here, the factor that facilitated the tactics was white’s better piece development and cooperation. Even if he hadn’t yet castled, his knights were placed on central squares (e5 and e4) and the bishop on d3 was ready to join the action. Black wasn’t able to find all white’s threats and became the victim of a nice tactic.

The second game was a Semi-Slav between Grandmasters Cifuentes Parada and Zvjaginsev in which black’s play was easier thanks to his better piece cooperation and space advantage on the queenside. Black correctly used the time white needed to regroup his misplaced pieces to improve his and prepare the final tactical blow.

Last but not least, we’ll leave you with a masterpiece played by Kasparov with the white pieces against Topalov in Wijk aan Zee. In a Pirc Defense, the two players soon reached an interesting middlegame with queenside castles where black’s pawn structure put his king’s safety in danger. It’s very instructive to watch how Kasparov makes use of the weak squares in his opponent’s camp and, just when it looked like the black king found some safety, he finds a fantastic tactical resource.