One of the main points of chess improvement is understanding the pawn structures that arise on each game. It is well known that the pawn structure is an indicator of where each side should play. However, sometimes things are not so determined; the position can have several other elements that demand action on a different direction. 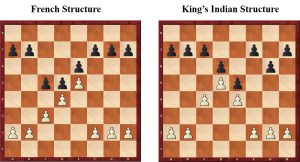 In the French structure white usually plays on the kingside. No matter where the black king is, white brings pieces to the kingside and starts putting pressure there. A typical pawn rupture is advancing the F pawn to f5 in order to undermine e6 or play f6. Black on the other hand usually plays on the queenside and center, attacking the base of white’s pawn chain and fighting for the C file.

On the next diagram, with the King’s Indian pawn structure, white’s play is well defined. The most promising plan is to play on the queenside. By means of b4-c5 white will open the C file and create weaknesses on black’s camp. Black also has his strategy well determined in these structures – his main idea is a kingside pawn storm by means of f5-f4-g5-h5-g4 and so on.

Note that in both structures black has two immediate ruptures available: f6 in the first diagram and c6 in the next one. Sometimes such ruptures are necessary to ease the opponent’s pressure on that flank or simply because opening the F or C file is favorable at that moment.

Of course, none of what is written above is meant to be followed as unbreakable rules. It should only be used as guidance when finding a plan and selecting candidate moves. There are many exceptions in which totally the opposite happens, mostly due to more elements in the position. An open file or a misplaced piece are the most common elements for this change of direction. You need to keep an open mind and keep aware of every detail of the position in order to choose what the best plan in the position is.

In this article that’s exactly what we will examine. We have chosen three examples in which one side goes against the established guidelines written above. In each of them we see the main added element which totally justifies an alternative plan. 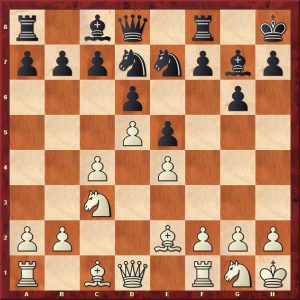 The position above happened in the game Ivanisevic, I – Halkias, S in the Serbian League 2009. The standard idea for white is to attack on the queenside by means of the c4-c5 pawn break.

However, white has re-arranged his pieces in a non standard way with Kh1-Ng1, enabling the idea of f2-f4. With the knight coming to f3 right away, securing control of the e5 square, the move f4 makes a lot of sense now. Ivanisevic played f4 with interesting complications.

See it in detail here: 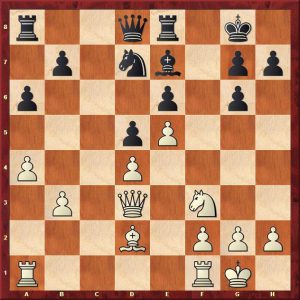 This next example belongs to the game Gligoric,S – Andersson,U Skopje Olympiad 1972. White has two possible plans – either try to create his own luck on the kingside by means of g3-h4-Kg2-h5 or try to seize the initiative on the opposite wing. We like the treatment employed by Gligoric in this position; he played Rfc1 followed by the pawn advance b4-a5-b5 with great pressure on black’s queenside. Although black could have defended better, it is still worth seeing this game in full detail. 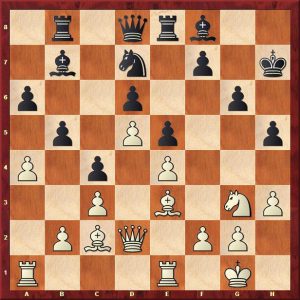 What would you play here? The position is from the game Tal,M versus Spassky, B Tilburg 1980. White has a pleasant choice. He can try Reb1!?, preparing b3 or he can try b4!?, immediately shutting the queenside and keeping the knight on d7 short of squares. However, Tal chose a different approach.

Seeing the lack of defenders of the black king, the magician from Riga thought about opening the f file and starting a direct attack against the black king, so he played Rf1! followed by Kh1 and f4. It is very interesting because white had a choice; a different player would have preferred quieter play on the queenside, but here Tal demonstrates that black’s weak kingside (h5, f7) could be exploited.

It is important to mention that advancing f2-f4 in structures with pawns on d5-e4 is not a risk free strategy; white frees the e5 square for the enemy’s pieces and sometime they can use it to their advantage. After f4 the game went into very interesting complications and became one of the best games of Tal’s career, with an outstanding sacrifice to leave his trademark.

We hope you have enjoyed reading this article and learned something new about the way you can handle these typical structures that arise from your favorite openings. Thank you for reading!