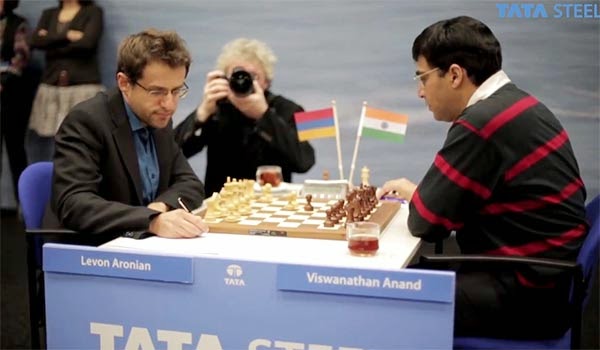 2013 was a terrible period for Viswanathan Anand. It was the year in which he lost the world championship title. In the pall of gloom there was one illuminating moment that lit up the sky early that year. It was the day on which Vishy played his immortal game against Levon Aronian at the Wijk-aan-Zee Tournament.

Admittedly, Vishy had prepared the line and some ground work was done before. But after the first 12 moves everything had to be seen over the board. As the struggle escalated, fans watched with bated breath. Right when it appeared that Levon had taken care of all the threats he resigned before a stunned audience. A proud moment for Vishy.

In the debate that followed connoisseurs compared it with the other immortal game. Enjoy both!-Ed.

There was no rapid event in Wijk-aan-Zee 2013, a tournament with regular time control.
Such classics would be remembered long after while sporting records continue to be made and unmade.

Great game by Mr. Anand,but Carlsen still won the Rapid Event. Now he is not only the classical champion but also a rapid one. What if he wins the blitz tomorrow? Then he will be an absolute, undisputed chess champion for ALL time controls. That’s crazy.