ChessBase Magazine is the flagship of ChessBase and released every two months. Our columnist offers review of a recent issue-Ed. It was a proud moment for American chess when the USA team won Gold in the Olympiad ahead of their rivals, Ukraine and Russia in a field of 170 nations. For those of us who watched the games, the Olympiad itself was a celebration of chess as never seen before. This issue of ChessBase Magazine captures the agony and ecstasy of the event as so many national teams vied for honors round after round. 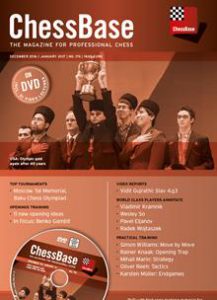 All the games from the Open section are included here and 103 of them are annotated (several by the players themselves). There is also a round by round video commentary by Danny King. It’s not easy to choose one among the many for this review. In terms of sporting result, the 8th round match between Russia and the USA was important.While Karjakin and Kramnik were held to draws by Caruana and Nakamura on top boards, young Robson lost to Grischuk. It only remained for Wesley So to level the scores by beating Nepomniachtchi. This appeared a Herculean task as Ian was on a high, scoring 7/7 in the preceding rounds. 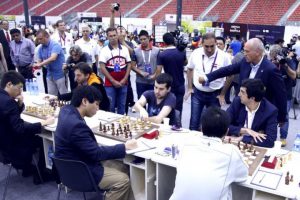 The David versus Goliath encounter is annotated by the winner himself who wrote, “This game was played in the 8th round. Our team was leading 6.5/7 and Russia was only half a point behind (they lost their match against Ukraine). I don’t need to tell you how crucial this match was in the fight for an Olympic gold medal.”

I have included his comments and offered my own commentary in view of recent developments in theory.

A setback for the ebullient Russian who still finished with 8.5/11, a creditable performance. To his credit he won the Tal Memorial Tournament soon after with a score of 6/9 ahead of Giri, Anand and Aronian. All the games of the main event are given here.

This issue also includes games from other competitions like the ongoing Bundesliga Tournament and the Russian Championship (won by Riazantsev).

There are a few omissions, though. In the women’s section in the Olympiad gold was claimed by China ahead of Poland and Ukraine for an historic first. These games are given a miss in the present issue. I think games by female players would be taken more seriously if they played in open contest with men as Judit Polgar did. This issue features a friendly match between Nigel Short and Hou Yifan. While the women’s world champion lost (+1 -2 = 3) she did put up a fight. Hou is no stranger to battles with men and more should follow her example.

The other omission in this issue is the coverage of the Blitz Tournament held on the occasion of Tal memorial 2016. Readers still looking for it would find it here along with all the games.

This brings me to other sections of the Magazine. There are 12 opening surveys ranging from the Alekhine Defence to the English Opening. For reasons of space, I shall mention only two of them. The first is Krisztian Szabo’s analysis of a rare line in Sicilian Dragon (B76) 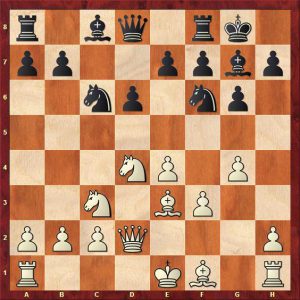 White keeps standard moves like 9.Bc4 and 9.0-0-0 on hold and keeps his counterpart guessing. Black on the other hand prepares for action hoping White would castle on the queenside, or else strike back in the centre. This is a game of cat and mouse. Currently, expert opinion is divided on Black’s next move. There are those who believe, Black can play 9…Be6 allowing 10. Nxe6 fxe6. While Black is saddled with doubled pawns on the e-file, he has a semi-open f-file and a pawn on e6 preventing N-d5. There are others who believe, Black should play 9…Nxd4 first so that he can develop his bishop on e6. Szabo’s analysis here pertains to this line and it offers rich possibilities for both sides.

The second survey that deserves special mention is Igor Stohl’s detailed analysis of main lines in the Benko Gambit (A58). Here we have space for a concrete position. 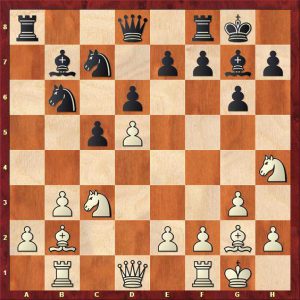 In this position White has tried both 15.Re1 and 15. Qd2!? The latter briefly mentioned by Stohl deserves greater attention. If Black tries to regain the gambit pawn with 15…Bxc3, White plays 16. Qxc3 and after the forced 16…f6, has the better position, whichever way Black gets back his pawn. This is also borne out by the games in MegaBase. The line is a bit of challenge to the Benko player.

Apart from these surveys, there are regular exercises in opening traps, middlegame tactics and endgame technique. For a change I shall focus on a different feature: 50 games of Spassky with emphasis on tactics. Young Boris was known for his elegant play and it was likened to the art of Pushkin. 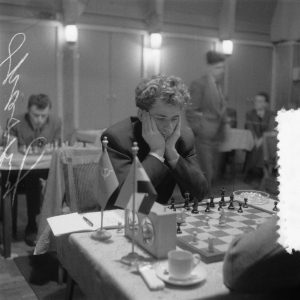 The following position is an old favourite. For the past moves White has not been able to capture the pawn on d6 on account of…Qb6 threatening both the bishop and the pawn on b2. More seriously, he is not able to castle on account of the bishop on c4. Boris found a solution that is both logical and aesthetically satisfying. 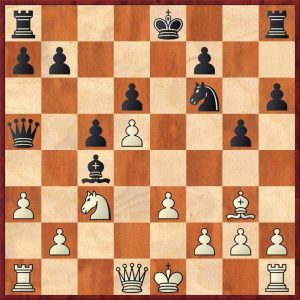 In all there are 3872 OTB games of which 147 are annotated. The commentators include Vladimir Kramnik, Mihail Marin and Michael Krasenkow among others. This time I missed Telechess section. Hopefully, the grandmasters would be back next time to present games from correspondence chess.

1) The image of USA vs Russia Match, Baku Olympiad, 2016 is captured by Anastasiya Karlovich is from ChessPro.ru

2) The image of young Spassky is taken from the Photo Collection, National Archive of the Netherlands

3) For more info. on this issue, see the Publisher’s site.

Help. I am looking for guide