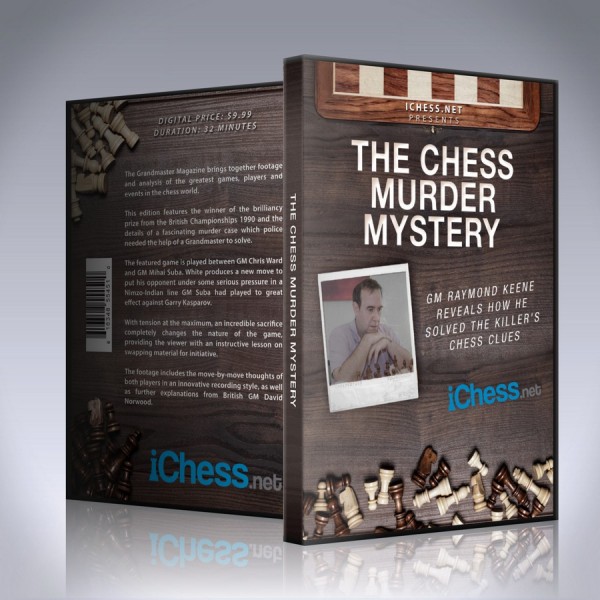 The Grandmaster Magazine brings together footage and analysis of the greatest games, players and events in the chess world. Grandmaster Magazine brings together footage and analysis of the greatest games, players, and events in the chess world.

The Chess Murder Mystery features the winner of the brilliancy prize from the British Championships 1990 and the details of a fascinating murder case in which police needed the help of a Grandmaster to solve.

More About The Chess Murder Mystery

The featured game is played between GM Chris Ward and GM Mihai Suba. White produces a new move to put his opponent under some serious pressure in a Nimzo-Indian line GM Suba had played to great effect against Garry Kasparov.

With tension at the maximum, an incredible sacrifice completely changes the nature of the game, providing the viewer with an instructive lesson on swapping material for the initiative.

The footage of “The Chess Murder Mystery” includes the move-by-move thoughts of both players in an innovative recording style, as well as further explanations from British GM David Norwood.

This is followed by GM Raymond Keene explaining his pivotal role in the solving of a murder mystery where the only clues were chess positions – surely a unique occurrence.

This edition of Grandmaster Magazine features a brilliancy from the famous Hastings tournament and an in-depth report and analyses from the Kasparov – Karpov 1990 World Championship.

The Hastings game was played between British GM Murray Chandler and GM (and Icelandic champion) Helgi Olafsson. A Ruy Lopez (Spanish Opening) is opened up with a central pawn thrust but Black seems to have everything under control. What follows is a textbook example of how to use an advanced pawn in attack, with promotion threats transforming into checkmate.

Both players provide their thoughts after each move of this fantastic game, giving an insight into the thinking of a Grandmaster.

The 1990 World Championship showcases the great rivalry between Garry Kasparov and his predecessor Anatoly Karpov. GM David Norwood looks at the critical games, analyzing the ferocious attacks (game 2) and staggeringly deep endgame strategy (game 16) as well as reporting on the reactions of the players and fans.

A must for students of chess history.

Women in chess edition of Grandmaster Magazine features a fascinating game between two generations of elite players as well as a discussion of the controversial topic of why women’s achievements in chess do not match men’s.

The brilliancy covered is between GM Alexander Khalifman, a former FIDE World Champion, and the Danish legend Bent Larsen. Khalifman’s classical style is pitted against the creative genius of Larsen in an Old Indian setup, leading to a complex game.

Both players give their thoughts as they occurred during the game allowing the viewer a unique insight into their decision-making process and evaluations. English GM Jim Plaskett provides expert commentary to extract the most instructive lessons from the games.

This game is followed by a debate, and blitz game, between GM Jim Plaskett and Women’s IM Cathy Forbes about women in chess and why they are not represented as often as they should be at the elite level. Cathy talks about the rise of the Polgar sisters in what becomes a heated debate that Nigel Short would be proud of.

British Chess Championships edition of the Grandmaster Magazine features reports and analyses from two strong tournaments as well as a short quiz at the end.

First up is the Leeds Speed Chess Tournament with 14 GMs among the participants. A young Mickey Adams was one of the favorites but he faced tough competition in the form of the legendary David Bronstein and Lev Polugaevsky – the latter claiming that this was his first-ever rapidly!

Next, Norwood is joined by GM Julian Hodgson who demonstrates the games that formed his remarkable win of the British Championships, revealing his thoughts during the game and giving tips on how to make things as difficult as possible for the opponent.

Hodgson’s unforgiving style makes for some great chess and his remarks are full of instructive wisdom for the improving player.