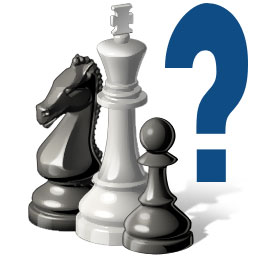 I have been asked many chess questions lately via my Facebook and Twitter accounts. Here is a list of selected questions with answers which maybe interesting for the general chess audience. If you have your own questions to ask you can send it on my email, Facebook or Twitter.

I have also received questions on languages other than English; I wasn’t able to reply, so please use English when sending me questions.

You will ask me why did I post 12 Q&A as a separate topic and not in FAQ? Because this are mostly practical chess related questions, where one wants to improve. You may have the same question as other chess players, so read on…

Hi, I have a question, should I read to become stronger at chess, or playing is enough?

You should study chess. You cannot just play games and watch your rating growing. You need to read books, study master’s games, do some opening and endgame preparation, work on tactics to see the improvement.

What openings do you play? I used to play the Ruy Lopez but everyone knows it pretty deep so I play Italian Game now. I play Sicilian and Gruenfeld or Kings Indian defenses.

I’m mainly a d4 player, so as White I play deviations of 1.d4 including QGA, QGD, Slav/Semi Slav, Nimzo, Kings Indian, Grunfeild, and Staunton Gambit. I’m trying to stay away of sharp variations of the Counter Gambit, sharp Meran lines and Trampowsky. As white (after 1…e4) I usually play the Sicilian (Dragon) or something quieter starting with c4. I’m looking to extend my opening repertoire for Black and studying Caro-Kann. Against d4 I play variations of Semi – Slav and systems with a6.

I play Scotch or Closed Sicilian (or 2. c3) as white and Scandinavian as black. Against d4 I sigh. Still struggling to find a proper way to play the closed positional games. Any suggestions?

I’m a d4 player myself, the game tend to be positional and often closed. You cannot learn to play positional games by studying theory, well let me clarify, the opening books. The way to go about positional games is to analyze high level games and look for themes and ideas to apply in particular openings you play.

Say you want to learn Slav/Semi-Slav, of course you need an opening book to know the exact lines, but select grandmasters/masters who play these openings and analyze the game, try to find some sort of annotation.

I would like to know whom or which websites can play online!

There are many website that offer online playing. I personally play on freechess.org when have time spend 🙂

Hi Yury,
I have to say your chess world web site is very cool. I am looking at buying Batsford’s Modern Chess Openings do you feel this is a good book or is there anything you feel is better?

I’m not very familiar with that book, but I assume it is an opening encyclopedia which covers 100s of openings in one book, not in great detail. I feel like it is a lot better to buy a book(s) on specific opening(s) you want to study. This way you would really learn the ideas of the opening. But if you need a quick reference guide that book might work, but there are a lot of computer programs (ChessMaster, Fritz) and online sources that can give you the opening lines as well. Good luck!

Hi, the position is pretty balanced. It is a typical Closed Sicilian position. Black would try to exchange the white’s dark squared bishop by playing Nd4 at some point. It is also possible to push queen side pawns for Black by playing a6 and then b5 hitting the light bishop. Black would try to open the c file and to occupy it with one of its rooks and pressure the c-pawn.
On the other hand, white would try to work on the king side, by moving the queen from f3 (say to e2 and playing quick f4 and f5).

The f file will get open eventually and white would try to do a king side attack. Once again, Black should work on the queen’s side and the center.

What are your favorite openings with white/black? Which openings you don’t like?
With black I like Russian opening, when not accepted the four knight’s game.
I hate the Orangutan with b4, had once a counter on that but I forgot it. Can you send me right moves to handle with that?

From this list of openings I enjoy the most games with Queen’s Gambit Declined, Semi/Slav and I like to challenge Nimzo also (I play Nf3 Kasparov’s variation). What I don’t like?

Hm, there is not really an opening which I don’t like. My openings I set the way that I avoid the lines I don’t like playing. For example by starting with 1.Nf3 I avoid some lines including Center Counter gambit, etc.

As Black against “1. d4” I usually play Slav/Semi-Slav formations. I tend to open up the position quickly, since I like open positions better than locked up. But, sometimes, closed positions are also fun to play, especially if you have good, well coordinated pieces. Agaist 1.e4 I play the Sicilian, from sharpest Dragon variation to slow Closed and O’Kelley Variation. I’m not very familiar with 1.b4, since it’s rarely played and isn’t very sound. The main idea here for Black is to occupy the center and take an advantage of the weak pawn b4 pawn, by playing h5 at some moment.

Are you a chess pro?

No, chess is my hobby, so is running a chess website.

Can you teach me how to make good openings??

I can’t teach you to play an opening. You need to work on it yourself. Pick an opening that you want to learn (positional/sharp, open/closed, etc.) and follow the guidelines I provided to get better at it.

Wich exactly way do you use fritz to help on improving your game?

It is a very good question. I was thinking about writing an article on this topic. But for now I can tell that chess program is a very good tool if used right. What can you use it for? Number 1 idea is to analyze tournament games you just played and then compare your own analysis with Fritz.

You can see exactly when you went wrong, what tactics you missed. It also has an opening database build in that can be used to improve openings/build opening repertoire. You can of course play against Fritz; it is possible to adjust strength to better match your needs. Another idea is to train endgames with a program: just setup theoretical endgame which should be won for you and try to bit Fritz in it.

I find it hard to play real game, because I used to play online, and acclimatization to 2d view.
Can you advise me what can I do ?

to tell you the truth I had exactly the same problem when I just started playing chess, I played a lot of chess on the computer, but almost never played over the board. When I came to the chess tournament I had to play on the chess board, but I felt uncomfortable playing there, since it was 3d.

You may want to try the blindfold chess to be independent of a chess board as well.

Hi, Yury. Can I play with you a game of chess?

Hey, I don’t play many games online at this point. You can find me at FICS; my handle is “kasparovda”.

Do you like chess questions? Check out our store and articles: