Here is the list of quotes by number 1 ranked chess player in the world – Magnus Carlsen. Not many chess players have the ability to become a grandmaster. Not many grandmasters cross the 2700 line. Only a few of those who do, achieve the 2800 rating.

But this guy is very special, not only he became a grandmaster at a very young age and was dominating the FIDE rating list for almost 2 years now, he also broke the ‘highest rating ever’ record of 2856 (held by Kasparov) with a new 2878.

It takes little extra something to achieve that much, so I feel he’s definitely worth listening to. 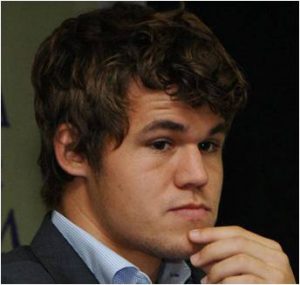 Some people think that if their opponent plays a beautiful game, it’s OK to lose. I don’t. You have to be merciless.

I started by just sitting by the chessboard exploring things. I didn’t even have books at first, and I just played by myself. I learnt a lot from that, and I feel that it is a big reason why I now have a good intuitive understanding of chess.

What I admired most about him (Fischer) was his ability to make what was in fact so difficult look easy to us. I try to emulate him.

Not winning a tournament is not an option for me, unless it’s no longer theoretically possible – then of course winning becomes impossible. But up to that point, not winning is just not an option. 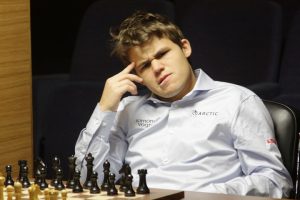 For me right now I think being the world number one is a bigger deal than being the world champion because I think it shows better who plays the best chess. That sounds self-serving but I think it’s also right.

There wasn’t any particular player I modeled my game after. I tried to learn from everyone and create my own style. I studied past players. Truth be told I never had a favorite player. It’s just not my nature to go around idolizing people. I just go try to learn.

All I expect are wins and to get pleasure from the game. And if someone thinks something about me, if someone’s dissatisfied with something… that’s not my headache. I hope someday I’ll become World Champion – and I’ll make all these people happy. But even if for some reason that doesn’t happen it won’t stop me getting pleasure from chess. I’m sure of that.

Contrary to many young colleagues I do believe that it makes sense to study the classics.

It’s easy to get obsessed with chess. That’s what happened with Fischer and Paul Morphy. I don’t have that same obsession.

I am not some sort of freak. I might be very good at chess but I’m just a normal person.

I am trying to beat the guy sitting across from me and trying to choose the moves that are most unpleasant for him and his style.

I get more upset at losing at other things than chess. I always get upset when I lose at Monopoly.

He (Kasparov) has an extreme capacity for work, extreme determination to win and extreme perfectionism.

Self-confidence is very important. If you don’t think you can win, you will take cowardly decisions in the crucial moments, out of sheer respect for your opponent. You see the opportunity but also greater limitations than you should. I have always believed in what I do on the chessboard, even when I had no objective reason to. It is better to overestimate your prospects than underestimate them. 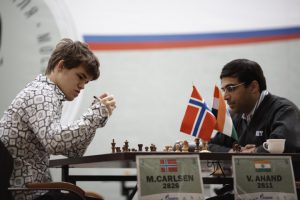 I can’t count the times I have lagged seemingly hopelessly far behind, and nobody except myself thinks I can win. But I have pulled myself in from desperate [situations]. When you are behind there are two strategies – counter-attack or all men to the defenses. I’m good at finding the right balance between those.

Without the element of enjoyment, it is not worth trying to excel at anything.

I don’t look at computers as opponents. For me it is much more interesting to beat humans.

I spend hours playing chess because I find it so much fun. The day it stops being fun is the day I give up.

I honestly don’t read that much. Obviously I read chess books – in terms of favorites, Kasparov’s ‘My Great Predecessors’ is pretty good.

It’s nice to be financially secure. Apart from that, I really don’t care too much about money.

My father, a fine chess player himself, has been a massive influence throughout my life.

People ask what my goal is. I don’t have a goal. 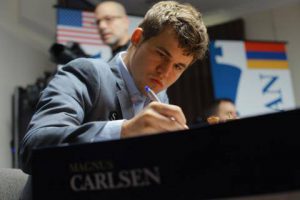 I’ve never been much of a computer guy at least in terms of playing with computers. Actually until I was about 11 I didn’t use a computer for preparing for games at all. I was playing a bit online, was using the chess club mainly. Now, obviously, the computer is an important tool for me preparing for my games.

One of the things that first attracted me to chess is that it brings you into contact with intelligent, civilized people – men of the stature of Garry Kasparov, the former world champion, who was my part-time coach.

I was lucky enough to attend schools where they were understanding about when I needed to go abroad to play chess. Of course, socially it is important to go to school and interact with people your own age.

I respect Anand. But I don’t fear him. Am pleased with all the arrangements here.

If you enjoyed the quotes by Magnus Carlsen, you may want to check out our chess quotes section and:

The images of Magnus Carlsen are taken from ChessPro.ru. Thanks, Art.

“touch move” is a greatest move

Prodigy in the truest sense!

“Some people think that if their opponent plays a beautiful game, it’s OK to lose. I don’t. You have to be merciless.” My favorite

I like this one [b]”I spend hours playing chess because I find it so much fun. The day it stops being fun is the day I give up.”[/b] Which one do you like best?

It’s really inspiring. Thanks for sharing.