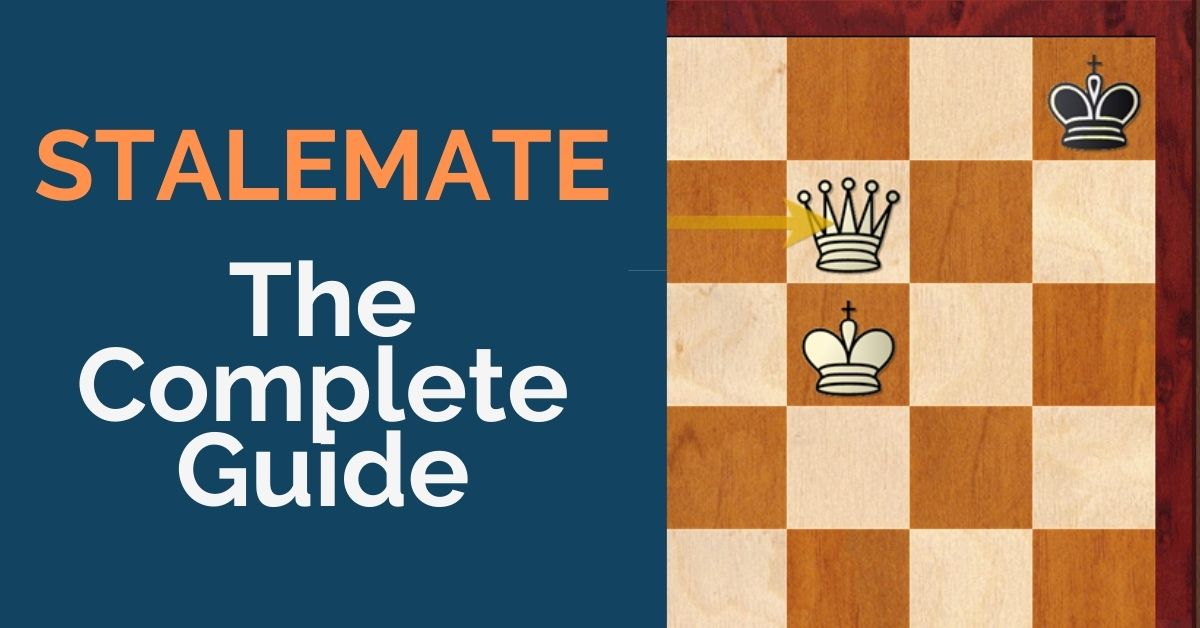 Stalemate is probably the most dramatic way of making a draw in a chess game. It is a common situation when a beginner tries to checkmate with lots of pieces against a lonely king, and then suddenly… stalemate and tears. But actually, this topic is much deeper than that. In this article, we will start with more basic stuff, and next, go to more advanced positions to see how wonderful a stalemate can be.

So, the definition of a stalemate is: a situation when a side whose turn it is doesn’t have any legal moves and isn’t in check. Most of you have probably seen this painful position many times: 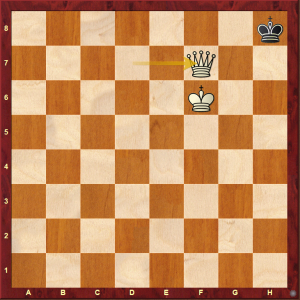 White played with the queen carelessly, and the game ends in a draw because of that. It is a stalemate.

Stalemate is also the reason many theoretical endgames are drawish. For example, the next one: 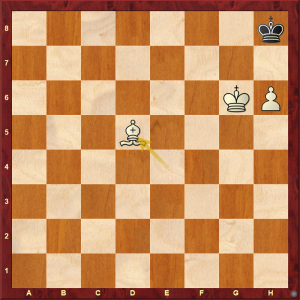 So here White has a light-squared bishop, but the promotion square of the pawn is opposite-colored. So whenever White tries to promote the pawn, Black’s king gets stalemated. If the bishop was dark-squared (the same as the square of promotion), Black’s king would get checkmated on h8.

In the next position, White needs his king to be on b1, so that would be a theoretical draw. But it seems like White can’t reach that square because Black would give a check with the rook from a1 and capture our rook. 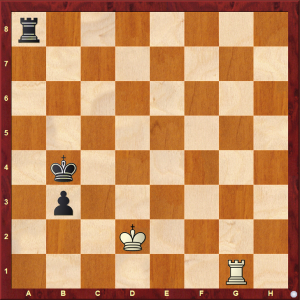 Nevertheless, 1.Kc1! is the only move that saves the game! After 1…Ra1+ 2.Kb2 Rxg1, White has no legal moves. Stalemate!

In the next position, White’s king will drive away Black’s king and collect all the pawns soon. Can you see how Black can save the game? 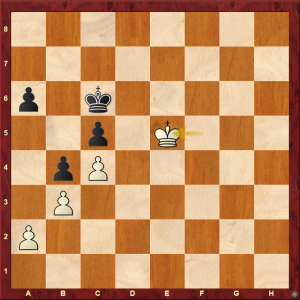 Black to move. How to save the game?

Stay the pawn on a5 instead of a6 and Black would have to resign. But here thanks to the free square on a5 Black’s king has a place to hide in. 1…Kb6 2.Kd5 Ka5! and after 3.Kxc5 it is a stalemate!

In the next position, the current world champion Magnus Carlsen saved the game thanks to a stalemate. 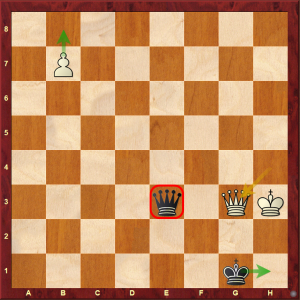 Here, if he exchanged the queens, White would promote the b-pawn and win the game. But Magnus spotted a stalemate possibility and played 68…Kh1, giving up his queen. White accepted the offer, and the game got drawn.

The final of the next game was really sudden and dramatic; the US champion Sam Shankland resigned in an absolutely drawn position against Anish Giri. 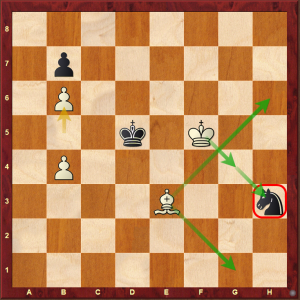 Black’s knight is trapped, and nothing can stop White’s king from taking it. The resignation seems to be logical, but actually, it is a dead draw on the board even without the knight. Black’s king should go to the a8 or c8 square and whenever White’s king approaches, a stalemate appears!

In the PGN-viewer below, you can find illustrative variations.

Stalemate is one of the most frequently occurring themes in chess studies; the defensive side often tries to stalemate themself. Let’s look at the end of Saavedra’s famous study. 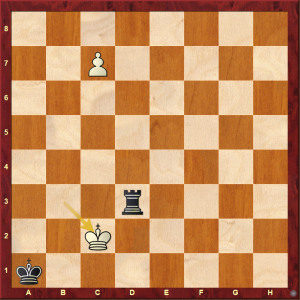 Black’s rook can’t stop the pawn from becoming a queen, but there’s still an important trick. 5…Rd4! Now if White queens the pawn with 6.c8Q, Black would play 6…Rc4! 7.Qxc4 with a stalemate. So White should be careful and promote the pawn into a rook!

Look at the solution in the PGN-viewer below.

This is a very common and important concept. When one side has only one piece that can move, they can try to sacrifice it to make a draw. If the opponent declines the sacrifice, the piece keeps offering itself for free until gets taken. Chess players call such a piece crazy.

Here is a clear example: 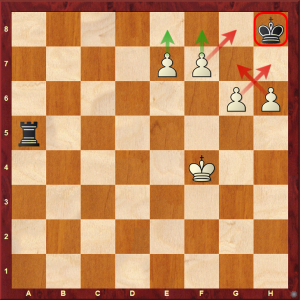 White’s pawns are ready to promote, and Black can’t stop it. Although the only piece that can move is the rook. Once you notice anything like that, start looking for stalemate ideas! Here the rook becomes crazy, 1…Rf5+! 2.Ke4 Re5+! 3.Kd3 Rd5+! and so on. Basically, we only need to keep checking White’s king from

the fifth rank. And it is important to sacrifice a piece with a check.
In the next position, Black’s king is stalemated exactly like in the position from the very first diagram of this article. Black’s pawns also can’t move; the only pieces that can move are the rooks.

If we got rid of them, a stalemate would be achieved. That is why both rooks become crazy.

I hope you already can see the pattern. 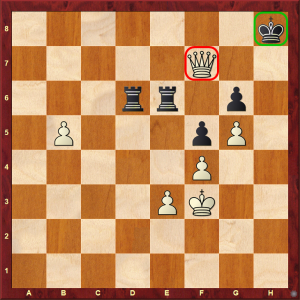 More exciting is the situation when a stalemate appears in a sharp position. When you are losing a game and try to survive, it is often good to remember about a stalemate possibility, even if there are many pieces.
In the next game, White missed a chance to save the game. 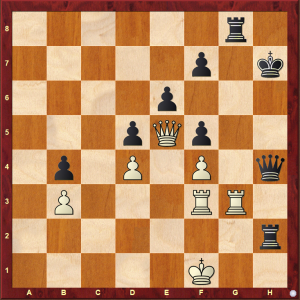 Black is two pawns up and has a strong attack against White’s king. White played 42.Qe3 here and lost the game. Instead, they could get rid of all of their pieces and force a stalemate!

Look at the variations in the PGN-reader below.

Larry Evans had only one chance to survive in the next position against Samuel Reshevsky: 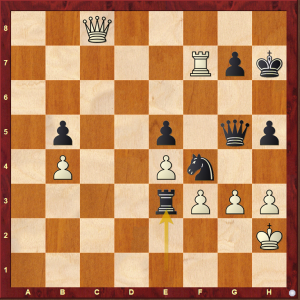 And he played 47.h4 Re2+ 48.Kh1, here Black didn’t feel the danger and played 48…Qxg3?? Now White’s king is stalemated, pawns can’t move, so again we only need to find a precise way to give up the remaining pieces. Look how the game finished in the PGN-viewer below.

Probably in the next game, Alexander Beliavsky expected his opponent to resign after 37.Rd7: 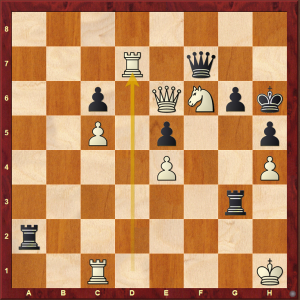 But he forgot about stalemate ideas! 37…Qxf6!! 38.Qxf6 Rh2+! And opponents agreed to a draw because the g3 rook becomes crazy and White’s king can’t run away. 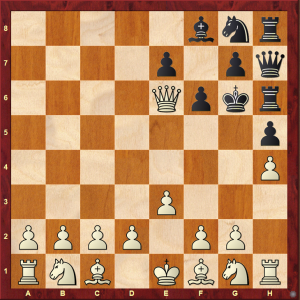 Stalemate in only 10 moves! Nobody found a shorter way to stalemate in chess yet.

Do you think it is impossible to stalemate with all the pieces on the board? 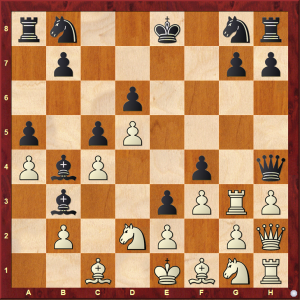 These positions probably have no practical value but still, show how rich a game of chess is.

So, as you could see, stalemates appear in practical games at all levels. They are frequent guests in chess composition and make a great impact on endgame theory. If you are losing the game, try to look for a stalemate possibility, maybe you can save the game beautifully and suddenly. Also, if you are winning, be careful and check twice whether your opponent still has legal moves and can’t force a stalemate.