Wilhelm Steinitz – Learning from the Legends 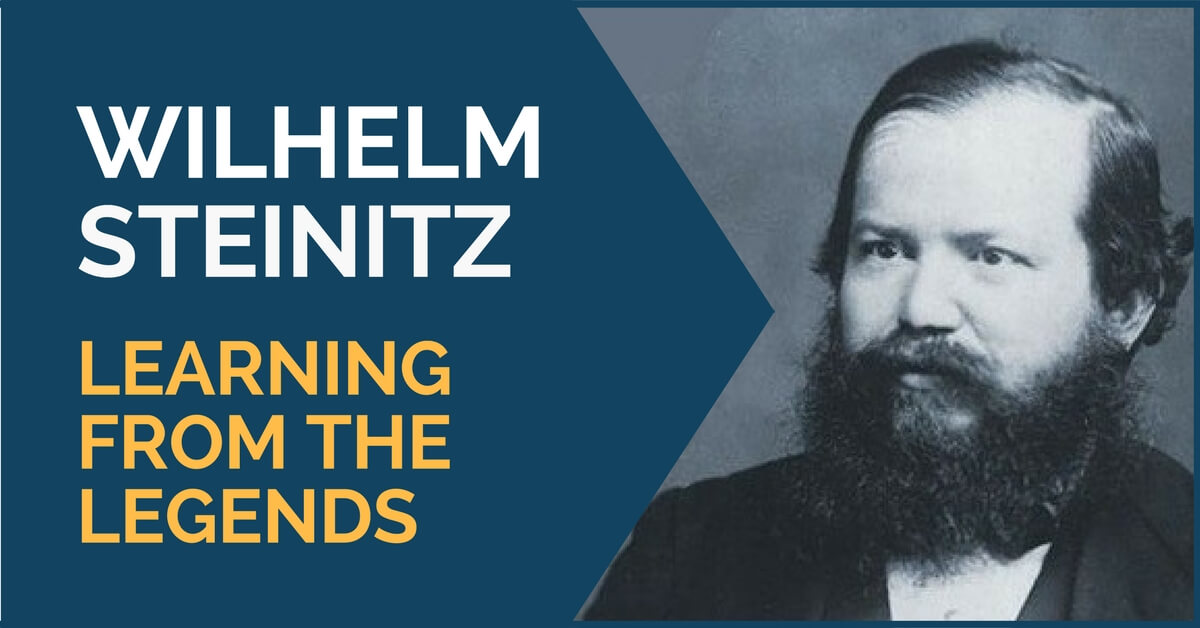 Continuing our series of classics you must study if you want to become a complete chess player, we are going to talk today about one player who built the foundation of the strategic concepts and principles as we know them today, Wilhelm Steinitz.

He was born in 1836 in Prague (back then part of the Austrian Empire) and started learning chess at the age of 12. He improved rapidly and started to be regarded as the best player of those times in 1866, after beating the current strongest player, Adolf Anderssen, in a 14 games match.

Steinitz lived in the “Romantic” chess era when the approach was to create beautiful attacking games at all costs. Games of that period often included chaotic sacrifices, where the attacks could or could not work. It often happened that the attacking side was literally left with no more troops to attack, being thus forced to resign the game.

This style was better exemplified by Anderssen and was adopted by every player, including Steinitz.

However, after 1872, he introduced a different approach that he demonstrated to be superior to the previous one – a positional style of play. His ideas were for a long time regarded as “cowardly” and sparked numerous debates before they were widely accepted and started to be used in practice by many strong players up to our days.

Between 1873 and 1882 Steinitz didn’t play any tournaments, but his comeback to competitive chess included winning the strong Vienna 1882 tournament. The following year he decided to move to the USA, where he went on to live for the rest of his life. Steinitz is also a renowned chess journalist, having contributed to many sports magazines and founded the International Chess Magazine (1885).

In 1886 a match against Zuckertort was arranged in order to determine the World Champion. It was played in New York, Saint Louis, and New Orleans and ended in Steinitz’s favor, 12,5 – 7,5. He kept the title until 1894 when he lost it to the much younger Emmanuel Lasker.

From then on, he started to play even more tournaments, obtaining very good results. From November 1896 to January 1897 he played a rematch with Lasker but lost 12,5 – 4,5. Shortly after the match Steinitz had a mental breakdown and was thus forced to retire from the chess scene.

Steinitz had an immense contribution to the chess theory, but probably his greatest one was introducing the importance of the positional elements in a game.

He can be considered one of the founders of modern chess, where the playing style is best described by Lasker, his successor as a World Champion:

“In the beginning of the game ignore the search for combinations, abstain from violent moves, aim for small advantages, accumulate them, and only after having attained these ends search for the combination – and then with all the power of will and intellect, because then the combination must exist, however deeply hidden.”

Next, we have selected three games played by Steinitz and, in order to emphasize his contribution to chess, have decided to start with one played before 1872, when the Romantic style could be seen in his games as well:

In the previous game, we see Steinitz employing a gambit line and playing an all-or-nothing game. In contrast, check out the game below played in 1973 against the same opponent.

He employed the Queen’s Gambit and went on to win by exploiting his rival’s poor strategic play:

However, whoever thought that respecting some basic strategic principles equals with a boring game couldn’t be more wrong! Steinitz’s concept was that in order for an attack to work, you must first finish development, improve the pieces and place them on ideal squares.

The next game is a famous attacking example of his where he combines elements of attack with positional ones: