Chess Strategy or What, When to Play? 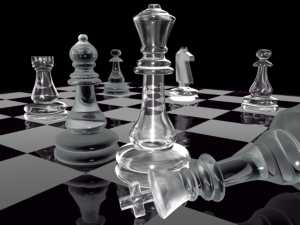 According to Wikipedia, chess strategy is concerned with the evaluation of chess positions and setting up goals and long-term plans for future play (Wikipedia the Free Encyclopedia). Most chess players understand perfectly well that choosing the right strategy against a stronger or a similar level opponent may decide the outcome of the game to their advantage.  However, many chess players usually underestimate the importance of developing the right strategy against a weaker opponent. Only a computer program plays the same way against all the opponents. Humans, on the other hand, have the advantage of employing different strategies based on the opponent’s strengths and weaknesses to achieve the best possible results. Knowing what chess strategy to follow against opponents of different strengths is a key factor for success at chess.

All chess players would have to play against a much stronger opponent sometime in their chess career. The stronger opponent, more than three hundred points higher rated, would normally win about eighty percent of the games. Grandmaster Simon Webbs, in his book Chess for Tigers, suggests that a stronger player is not necessary a tremendous opening expert.   Weaker player should play his “normal” opening lines and if an opponent deviates from book sooner, the weaker side would obtain some sort of advantage. (Webbs, Chess for Tigers, 39).

A mistake, that many players make when playing against stronger opposition, is trying to keep the position very quiet and simple. In fact, they do not realize that the main difference between a novice player and a master is that second understands the nature of a position much deeper and knows how to convert a tiny advantage into a win. An aggressive exchange of pieces is a bad practice when playing against a stronger player. Strong players know very well how to win these endgames. Webbs suggests “even if the summit of your ambition is a draw, you are much more likely to achieve this by getting the advantage and then offering a draw, than by keeping a position equal” (Webbs, Chess for Tigers, 39).

Since strong players know very well how to win simple positions, it makes a lot of sense for the weaker side to complicate the position. If it is possible to play a line, where consequences are unclear, the weaker players should definitely go on and play it.  According to Webbs, in these unclear and random positions, a weaker player has a lot more chances to survive than in simple and straightforward ones (Webbs, Chess for Tigers, 38).

Creating a really unclear position takes a lot of skill and effort. The hardest positions to judge, according to Chess for Tigers, are those, unbalanced ones, with unequal material: rook against two minor pieces or minor piece and a pawn against a rook (Webbs, Chess for Tigers, 40).

Playing a much weaker opponent may look like an easy task, at a first glance. However, defeat by a weaker player hurts the stronger player and his rating the most. There is a great psychological pressure on a stronger player’s shoulders while facing a weaker opposition since everyone expects him to win. The majority of players think that a weaker opponent will lose automatically, which isn’t always the case. “Even rabbits have sharp teeth” – clarifies this situation Simon Webbs (Chess for Tigers, 31). Strategic mistake, that many chess players make, is not realizing how to play weaker opponents in order to achieve the maximum number of “wins” and avoid these accidental “draws” and “loses”.

By playing this type of opponents normally, a stronger player is taking unnecessary risks. The basic chess strategy when playing against a much weaker player is exactly opposite to that when playing a much stronger one. Simon Webbs recommends keeping everything under control, simplifying the position, and waiting until the weaker side makes a decisive mistake (Webbs, Chess for Tigers, 31).

Chris O’Connell, my coach and number six ranked correspondence chess player in the U.S., states: “When playing a weaker player, you must consider his whole game as a weakness. At some point, he’ll mess up and you’ll get you to win.” (Personal Interview, Chris O’Connell). When facing a weaker opposition it is a good idea to keep everything under control and avoid any randomness, unclearness and let the better technique play its role.

Most of the times, a chess player is facing those, who are about the same strength as himself during a competition. When playing against a similar strength opponent, a player should play “normal” chess. Normal chess means that a player should not attack like crazy (a good strategy against a stronger opposition) nor should he play “waiting for a mistake” chess (great against weaker opposition), but play something in between, which is well balanced and within his repertoire. Games of equally strong players end with large number of draws.

Therefore, it is crucial to know what to do in an equal position. Webbs advises being very patient when playing for a win in equal position and “to try various maneuvers, to see what your opponent does, and if you don’t seem to be getting nowhere repeat the position and try something different” (Webbs, Chess for Tigers, 73).

In a dead drawn position, it’s a good strategy to play slowly and does not make any rapid moves because it may lead to a blunder and ultimately cost the game. In Chess for Tigers, it is suggested to take at least thirty seconds on each move, even if the moves are completely obvious (Webbs, Chess for Tigers, 73).

Developing the right strategy against players of different strengths is the key element for success at chess. It is very important to understand, for every chess player, what strategy to employ against an opponent based on his strength.  It is crucial to develop a correct strategy against not only stronger or similar level opposition, but against weaker players as well, since defeat from a weaker player hurts stronger one and his rating the most. Against stronger opposition, it is recommended to create unclear, random, and totally not “judge-able” positions.

When playing against a weaker player, it’s recommended to do exactly the opposite: keep everything under control, wait for a mistake and let the technique play its role. Playing the same level opponent requires the ability to be calm and patient.  Playing “normal” chess is by far the best strategy here. In a drawn position it is very important not to make any quick moves which may lead to a blunder or lose. Employing these strategies over the chessboard will bring quite a few unexpected wins against much stronger opponents, eliminate unfortunate loses and draws against weaker players, and improve overall results against the similar level competition.

Thanks, I’ll try my best to write more things of this kind! 🙂 Your comments really motivate me to do that.

Incredible article, Yury! Seriously, it’s great to see that kind of stuff on this site. I can devour it.