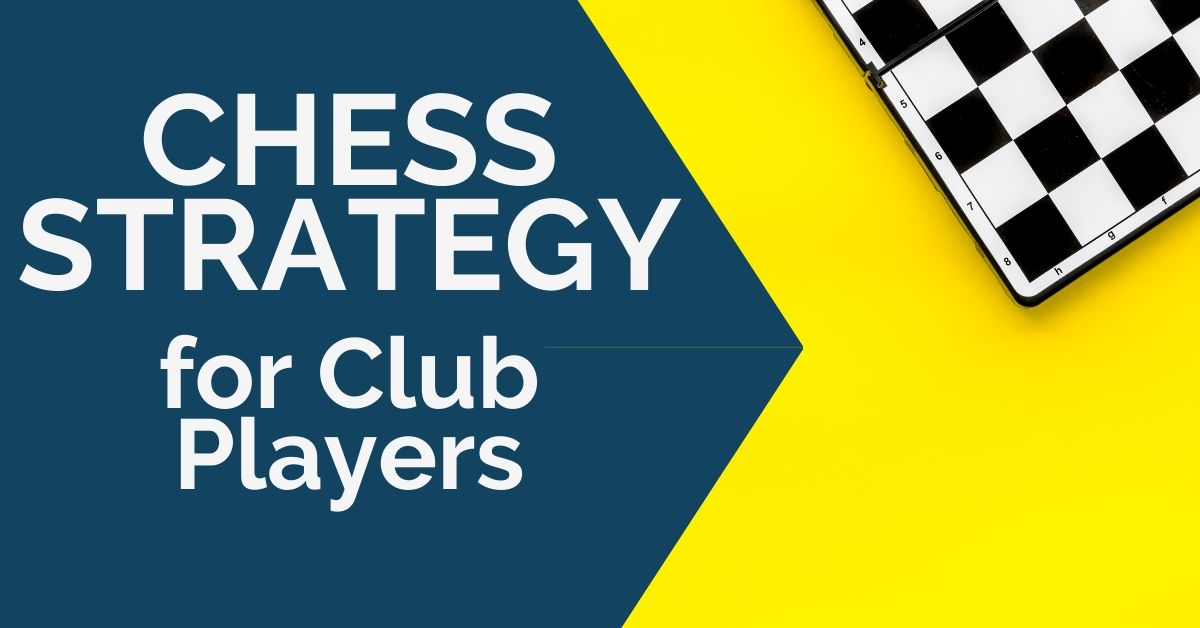 What is Chess Strategy?

First, you have understood the very basics of chess strategy:

1. The importance of controlling the center

2. The advantage of keeping a good, healthy structure versus a damaged one

Next, after you have created the habit of constantly looking for better squares for your pieces, you can move on to the study of other important elements.

One of the terms you will encounter most when studying chess strategy is weakness.

This is one of the key strategic elements and you should invest a proper amount of time into understanding it fully.

Weakness is a square or a pawn that can no longer be controlled or defended by another pawn.

This is the general description of weakness, but you have to remember that it is incomplete.

One of the very common chess strategies lies in the ability to use (occupy with a piece) or attack such a square or pawn. In other words, a weakness can’t be really called so unless we can use it in the near future.

Let’s take a look at the following diagram: 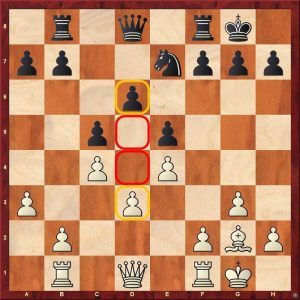 If we apply only the definition mentioned above, we will find the following weaknesses:

Now let’s apply the second part of this process:

If we look at the pawns, we will understand that both d3 and d6 are very difficult to attack in this position. Since neither white nor black can use them, we will not consider them as weaknesses for now.

This evaluation can, of course, change as the position evolves.

For example, let’s imagine that white has played the move f4 and exchanged pawns on e5: 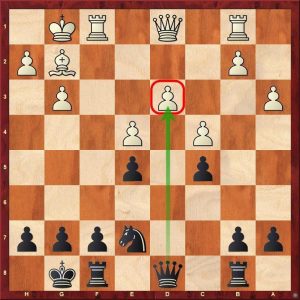 In this case, since the d-file has opened for the black pieces, the d3 pawn has become an important weakness in white’s position. Black will be able to attack it by bringing his heavy pieces on this file. White will have to pay attention to it at every moment and their pieces will be tied up to its defense.

Let’s return now to our previous position and think about the squares d5 and d4.

Are they really weak?

In the same manner, we have to see if they can be useful for the white/ black pieces [this is a slightly more advanced chess strategy].

From there, it will control many squares in the white camp and will become very strong: 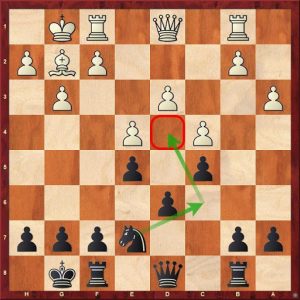 In conclusion, we can say that d4 is indeed a weak square in white’s position. It can be used to improve the knight from e7 after the maneuver shown in the diagram above.

Once you understand what is a weakness you can move on to chess strategy for exploiting different types of weaknesses.

Chess Strategy 2: What is an Outpost?

One of the first concepts you will come across when studying weak squares is that of an outpost.

Weak squares are usually great destinations for our own pieces.

The reason is simple – they are squares inside the enemy camp and, since they can no longer be attacked by another pawn, it means that our pieces will be fairly safe there. It is a common strategy that strong players use.

However, they could still be attacked and kicked out of these squares by other enemy pieces. This is where the outpost comes into the scene.

An outpost is a weak square that is controlled by one of our own pawns.

A knight placed on a weak square on the 6th rank, for example, defended by a pawn, resembles an octopus – it controls the entire opponent’s position.

Take a look at the following position that occurred in a famous classical game between Mikhail Botvinnik and Salo Flohr: 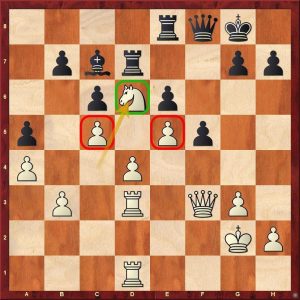 Notice how powerful the knight on d6 is in this position and how uncomfortable black’s pieces are.

He lacks space and, with the white knight on d6, he is now forced to stay passive and defend the weak pawns in his position. He has, of course, the option of trading this knight, but this will offer white a powerful protected passed pawn, which is far from an improvement in this situation.

From the study of the weak squares, you can now move to the study of weak pawns and here you will understand why a good, healthy structure is so important.

First things first – study how to attack and eventually capture a weak pawn.

Here, one of the golden rules you will come across and should never be forgotten is that before attacking them, weaknesses must first be fixed. In other words, you have to make sure that the weak pawn you plan on attacking is pinned in place and won’t advance. Otherwise, piling up pieces to attack it might prove in vain.

This is only the starting point for a more in-depth study of the typical pawn structures.

You will learn that every pawn move must be assessed very well and a superior pawn structure can be enough to win a game if you know the right plans.

These are some of the structures that every chess player must know:

This term refers to a pawn that is placed behind the adjacent pawns and can’t be safely advanced forward. Another feature of this pawn is that it is usually placed on a semi-open file. 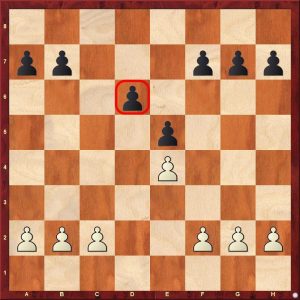 This is a typical structure that can arise in the Sicilian Opening. Black’s pawn on d6 is a backward pawn and is one of the weaknesses that white will try to exploit throughout the whole game. In addition to the pawn, the square in front of it (d5) is also weak and can be used as an outpost for the white pieces.

This pawn formation refers to a pair of pawns that are separated from the rest of the pawns: 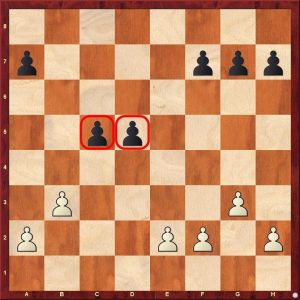 Such pawns are also considered to be weak.

However, things can be tricky in this case, as the side who has them will play for the initiative. I recommend you study this structure in-depth and understand when these pawns are really weak and can be used to your advantage and when they can represent a threat.

As the name suggests, this structure is formed of two pawns – one in front of the other.

It can occur as a result of trades and, if the pawns are isolated from the rest of the structure, they usually represent a weakness in our opponent’s position. 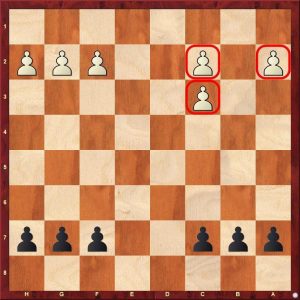 Here, the doubled pawns could be attacked by the black pieces, so we can think of them as an uncomfortable weakness in white’s position. As we have seen in the case of the backward pawn, it isn’t only the pawns that are weak, but the square in front of them is also a liability in the position.

However, if the pawns are defended (imagine there is another pawn on b2), then it will be very difficult for black to prove that this structure is weak. Sometimes, doubled pawns can even represent an advantage of the position, if they are controlling important central squares. Again, an important structure to study and understand.

The isolated pawn – it refers to a pawn that is all alone, completely separated from the rest of the pawns.

The most common and important such pawn is the isolated queen’s pawn, placed on the d-file: 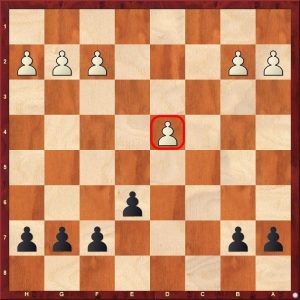 In the diagram above the d4 pawn is an isolated pawn.

As you can see, it can’t be defended by any pawn of the same color, so we could immediately draw the conclusion that this is a weak pawn. In this case, this is only partially true – if you manage to get into the right type of positions and put pressure on it, then it will be. But this is one of the most complex pawn structures.

As the isolated pawn is a central one, it offers space and the control of important central squares. Because of this, if the side having it manages to get a superior position for their pieces and get the initiative, then the position can become complicated. There are many interesting plans to study and remember here, so I recommend you spend some time understanding the particularities of this position.

Last, it is time to understand your pieces better and answer what is perhaps one of the oldest questions in chess – the knight or the bishop?

You will see that there is no clear answer to this question, but you will have to assess which one is better based on the position you have on the board. Chess strategy will be based upon positional factors and the pieces you have.

Generally, knights are superior in positions with a closed center, while bishops work better when the center is open.

There are many instructive games you can study in order to understand this important positional feature better and, in time, you will be able to correctly assess which of the two is the superior piece in a given position.

Want to take your chess strategy a step further?

IM Edward Porper has put together his 10-hour Chess Strategy Manual – the complete guide to chess strategy for players 1400-2100. Learn to read the position, dream the future, and march to victory with 10 hours of beautifully explained eternal principles. 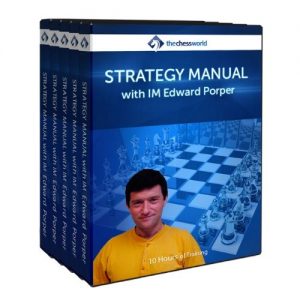