3 Most Common Opening Mistakes to Avoid 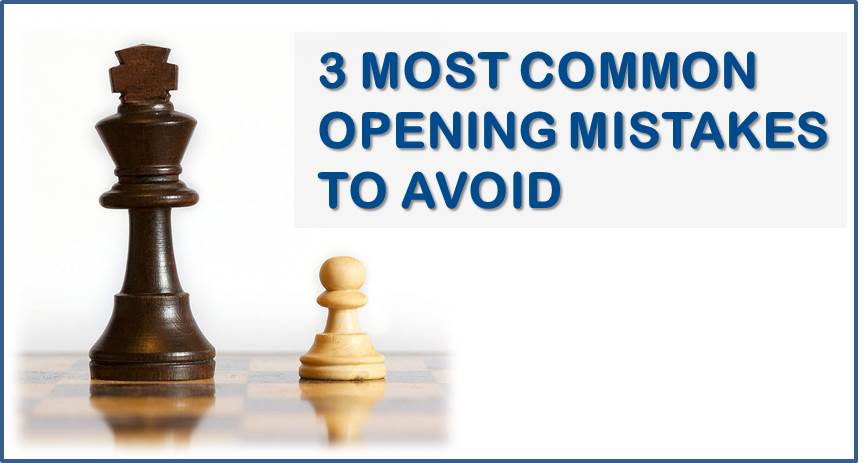 Opening Mistakes to Avoid: Every chess player knows how important opening preparation is. A good opening knowledge can give you an advantage necessary to get a comfortable Middlegame as white or help to equalize as black. In today’s article, we will talk about the 3 most common opening preparation mistakes that you must avoid at all costs. Let’s get started.

Chess players love opening traps. The only thing chess players enjoy more than the opening traps is catching their opponents with one of those. It is an easy way to win the game, and technically you can already be a piece up as early as by move 5. Surprisingly, chess players that rely heavily on the traps often face major problems in the Middlegame.

Why does that happen? Many of the traps assume some sort of inaccuracy from the opponent. Traps also need to be set up, and oftentimes that requires making inferior moves. You do get a shot at catching your opponent, and if that happens life (or rather game) is awesome. If it doesn’t happen, however, then you need to face the consequences, which may lead to not-so-favorable Middlegame.

The point I’m trying to make is simple. Knowing traps and trying to win games using traps are two different things. You have to know the traps to stay safe and also to have a chance of applying them in practice. Using traps as the weapon of choice is a very risky business. Not many people make living as professional gamblers. If you want to achieve consistent results at chess, you’d be better off sticking with the solid opening lines.

Many amateur chess players study a single line or a single variation when they learn a new opening. After memorizing the main line 10 moves deep, they feel confident enough to play that opening over-the-board. Needless to say, they often find themselves rather confused and disappointed when their opponent deviates from the “theory”.

If you want to play openings with ease, stay out of trouble and start counting on the upper hand in the Middlegame, it is better to work on broadening your opening knowledge for a line of your choice. That means, if you want to play 1.d4, you should not only study the Queen’s Gambit Declined/Accepted but also have some understanding of Slav/Semi-Slav, King’s Indian, Grunfeld, etc.

The trick to playing chess openings successfully is not to memorize the entire Encyclopedia of Standard Openings, but rather to be able to get familiar positions regardless of what your opponent does.

#3: Not realizing transition to the Middlegame

Another common opening mistake occurs when a chess player that knows the line many moves ahead doesn’t realize the transition between opening and the Middlegame. Because he is very familiar with the opening line he doesn’t need much time to respond to the opponent’s moves. That blitz-type play can last for as many as 10-15 moves, depending on the depth of the home preparation.

After spending under 5 seconds per move for 15 moves in a row, amateur players get used to the pace. And, they keep playing speed chess not realizing that they are already outside of their “theory”. That can be especially deadly when the second player has a greater depth of preparation and replies quickly. In such a situation, the odds are very high that the first player will make a mistake and lose the game.

In order to avoid being in this kind of situation, you should always double-check that you are in control of the game. And, you know what is actually happening on the board. Once your opening knowledge comes to an end and you enter new territory, you should stop and think for a moment about further actions. Evaluate the position, come up with a general plan and only then think about your next move.

We also recommend reviewing The Principle of Two Weaknesses.

Avoiding these three very common mistakes will be a good help in your opening preparation. If you want to learn more about how professional chess players work on the openings, you should sign up for the 21 Days Course, where you will also learn how to work on your chess on daily basis to actually see the results you always wanted!

Click here to start your training today, you have nothing to lose!