How to Beat a Club Player 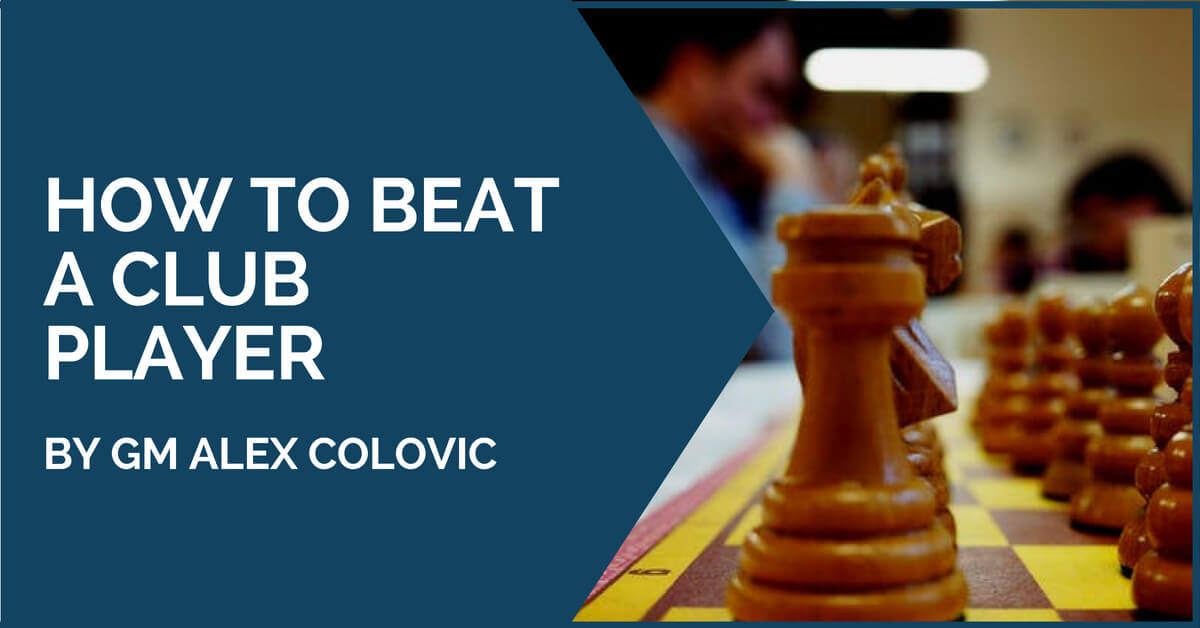 I’ve beaten a few, so I should know, right?

It used to be so easy. I would go on an open tournament and breeze through the first several rounds, without preparation or anything. Those days were only a bit busier than the rest days.

In the 1990s club players didn’t know anything. They didn’t know openings, they didn’t know middlegame plans, they had no positional understanding, and they didn’t know endgames. Beating them was basically a matter of showing up and waiting for them to mess up, sooner rather than later. Things slowly started to change in the new millennium…

The engines were getting stronger and the proliferation of high-quality chess material was booming.

Fast-forward to 2018 and it is possible to find a good book or online material on practically any chess-related topic – whether that be an opening, pawn-structure, playable endgames, psychological insight or tournament strategy.

Today every player has a 3500-rated companion in his computer with whom he can analyze endlessly and ask questions that are answered with nearly 100% precision. Add to all this the availability of high-quality coaches around the world and you get a perfect study environment for chess improvement.

The access to information and coaching helped the hard-working club players to improve immensely. It is not surprising anymore for a club player to know his own pet openings better than a GM.

Club players dedicate hours on honing their tactical skills by solving exercises from books or online; they do the same with all the aspects of their game. They study typical structures and middlegame plans from books and videos by the world’s best players.

So, how do you beat them today?

I have suffered more than a few upsets when playing club players in the new century. Luckily, I learn quickly, so here I will share with you what I understood how the games with club players should be approached.

The pairings come out and lo, you’re playing a club player. Be particularly watchful of your feelings at this very moment.

These feelings will give you information about your own state. They will need to be taken into consideration during the preparation process. As a general rule, you should be confident, but also a little tense.

A healthy amount of stress helps the brain and then it works better.

This means opening your laptop and looking for your opponent’s games in the database. Hopefully, there will be enough for you to determine his opening tastes. It is important to take a look at his repertoire with both White and Black, even though you’ll be preparing only for one color.

The reason for this is that in case you decide to play something and then it turns out he plays the same opening with the other color, then perhaps your “surprise” won’t be very big. After you determine his opening choices you should then decide what to play. It is of vital importance to surprise your opponent in the opening.

Club players, like all other players, are attached to their openings and in view of the ample informational overflow, I spoke above they can be trusted to know them well.

The importance of surprise is two-fold: first, you would be getting them out of their comfort zone and, second, as a result of that you’ll be obtaining a psychological advantage from the start.

Bear in mind that a surprise may not necessarily be a new opening played by yourself (don’t forget that your opponent will also be looking at your games and preparing) – it can also be a modification in some of the sub-variations of the openings you normally play.

This is the time to show what you’re capable of.

Assuming you have done your preparation well and have managed to surprise your opponent, you would be starting the game with a psychological advantage (and sometimes even with an advantage on the board and on the clock in case your opponent didn’t play the opening too well and spent too much time on it).

Now the key component is to be patient.

The club player won’t roll back and die, as they used to. They will fight and resist. They will find good moves in difficult situations. It is very important not to be dispirited by their resistance. Chess is a struggle and even if you have an advantage you have to fight if you want to win.

Nobody will give it to you easily.

This may mean that the advantageous opening will transform into a better middlegame and then the middlegame will transpose into a winning endgame. Still, until the clock is stopped, the game isn’t won.

You must be patient throughout all these phases. If it is necessary, you should be willing to play more than 100 moves to win the game. There are no easy wins anymore.

Chess games are spoilt by one thing only.

Whether they be one-move howlers or a “miscalculation” on move 3 in a positional line that forces you to make a weakness, the essence is always the same – we miss things. The best possible practical advice is to work on improving your calculational skills.

After a prolonged period of continuous work on this aspect of your game, you will see the difference. You will blunder less and will pounce when your opponent does. One more thing I have noticed is that endgames are the weakest aspect of the play of club players.

Becoming better at endgames will increase your chances dramatically – in the final phase of the game, there is no time to correct the mistakes.

In the above analysis, I tried to give an overview of the approach to a game against a club player. To summarise:

Ideally, it will go according to the described scenario and you will win. And if you don’t, then you will learn.