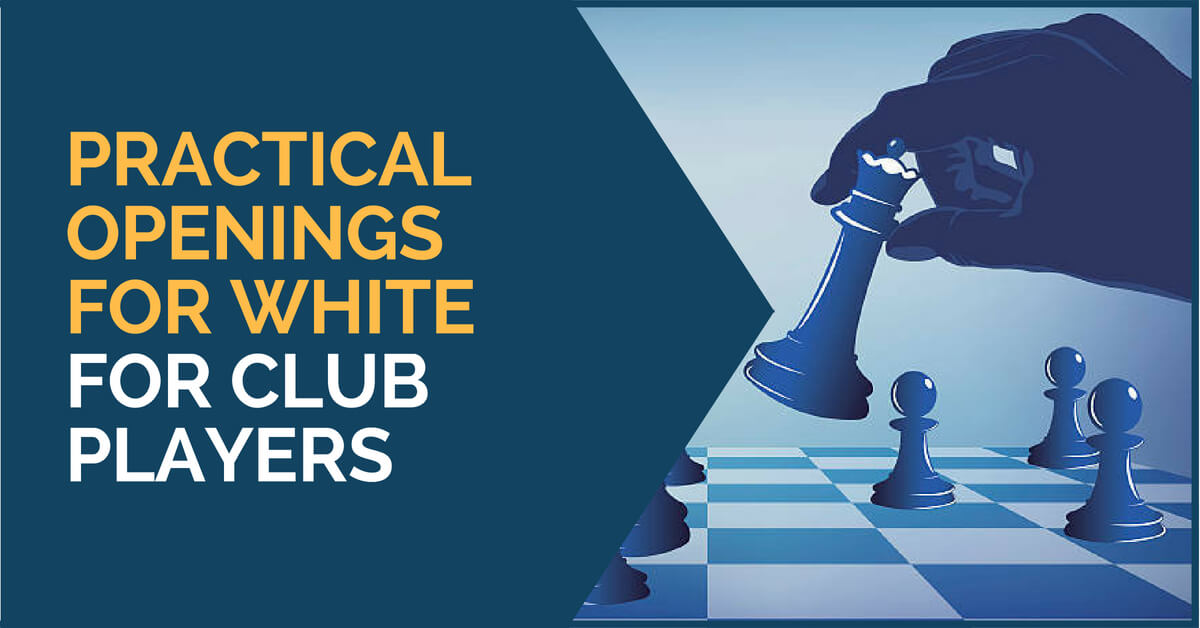 Practical Openings for White: I already touched upon this subject in my previous article How To Train, where I addressed the technical aspects of how to choose an opening, how to study it afterward, and how to use the database and the engine. If you haven’t done so already, I strongly recommend you read it first.

In this article, I will analyze various openings from the aspect of their practicality. By practicality I mean easiness to memorize and play. Does an opening require a lot of preparation before you can play it?

If an opening requires a lot of study and is difficult to memorize it is impractical. Of course, various players have a different understanding of what is difficult and what is easy when it comes to chess, so here I will mostly have in mind the club players who have limited time to devote to their opening preparation.

Starting from left to right, 1. b3 has recently been used by very strong players like Nakamura, So, Karjakin, Rapport, and many others. The reason for its popularity is the somewhat unorthodox middlegame positions that arise. Very often White gives away the light-squared bishop and puts his knights on d2 and e2, behind the pawns on d3 and e3, obtaining a very flexible position.

But is it practical to play like this with White?

Would you feel comfortable preparing against all these (and then some more) set-ups and memorizing all your preparation? It may not be such a problem for the top players, but club players would most likely find this very demanding.

Practical Openings: So the verdict is…

The English Opening is easily the most impractical of all.

Moving to the center, 1.d4 is a good choice. Black has two main moves, 1…d5 and 1…Nf6 as the others (for example 1…c5, 1…d6, 1…e6, or 1…g6) will either transpose or are theoretically inferior. Obviously, some work will have to be done in order to prepare good lines against these moves, but then this will guarantee an advantage so it is worth it. The Dutch 1…f5 is the third option, but here it is White who actually chooses his set-up, so this can be easily prepared.

It is very important how White will approach his openings after 1.d4. He has two different strategies at his disposal: a) to play the main lines and b) to play a “scheme”.

Please bear in mind that playing the main lines does not necessarily mean going deep into the theoretical woods. It is very much possible to choose sidelines within the main lines, thus making the opening strategy one with a twist.

Mainline with a twist

Let me give you an example of a “mainline with a twist.” In the King’s Indian Defence everybody is playing the Mar del Plata, the Saemisch, the Fianchetto Variation, etc.

You can still enter the King’s Indian, but instead of all these heavily analyzed variations, you can choose Smyslov’s favorite line against it: 1. d4 Nf6 2. c4 g6 3. Nc3 Bg7 4. Nf3 0-0 5. Bg5. It is an unpleasant line for Black, who basically has two main plans against it: to play for …c5 or to play for …e5. These can easily be prepared, plus a study of Smyslov’s games, and you’re ready to play against the King’s Indian!

This is just one example and there are many such sidelines within the main lines in all the openings.

So if the White player decides to enter the main lines then he’d be well-advised to look for similar ways to steer the game towards his own preparation.

The second strategy, playing a “scheme” is self-explanatory. White arranges his pieces in a predefined way, more or less irrelevant to what Black does. There are several of these after 1. d4: the Colle System, the Zukertort System, the London System, and the Torre System.

The “scheme” is by far the most practical way to study and create an opening repertoire. They are easy to learn, the possibility of mixing things up is low and the middlegame plans are known and the player can be confident that what he is doing is correct. The disadvantage of playing a “scheme” is that Black does have a wide variety of choices against these systems.

Still, this variety is within “your” scheme so a good study of it will go a long way and on the club level, it is very unlikely that somebody will manage to put pressure by means of high-level opening preparation.

It is possible to play 1. d4 in a practical manner.

The main difference between 1. d4 and 1. e4 is that after the latter White cannot really play a “scheme” as after 1. d4. Black’s openings are too different in character and no single “scheme” will fit them all.

For this reason, White is obliged to enter a more theoretical debate. But as mentioned above, it is White who chooses what to play.

The first move 1…e5 offers White the choice between the Ruy Lopez (Spanish), the Italian, the Scotch, the King’s Gambit (for the romantic!), the Four Knights, the Bishop’s Opening.

The Scandinavian offers White the choice between the plans with or without Nc3.

The list is not conclusive, but I am sure you get the idea by now. It is possible to play 1.e4 and be practical about it.

The move 1 Nf3, unless White wants to transpose to lines that usually arise after 1.d4 or 1.c4, doesn’t offer White much flexibility as he is restricted to a fianchetto of the Bf1 and then playing a King’s Indian Attack or a Reti (the latter can also arise after 1 c4). Black obviously has a huge number of options here. This puts the King’s Indian Attack after 1 Nf3 into the category of a “scheme” and can be a practical choice.

Looking for more on this topic? Here are:

This concludes the analysis of White’s openings. In Parts II and III we will take a look at what Black has at his disposal after each of White’s first moves.