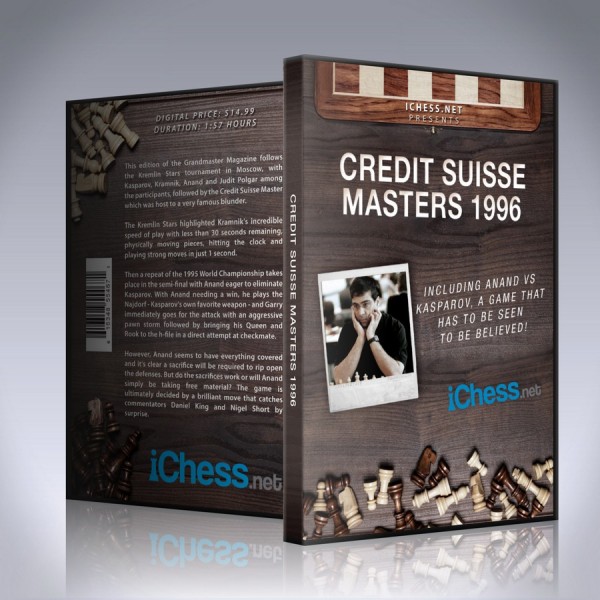 This edition of the Grandmaster Magazine follows the Kremlin Stars tournament in Moscow, with Kasparov, Kramnik, Anand, and Judit Polgar among the participants, followed by the Credit Suisse Master which was host to a very famous blunder.

This edition of the Grandmaster Magazine follows the Kremlin Stars tournament in Moscow, with Kasparov, Kramnik, Anand, and Judit Polgar among the participants, followed by the Credit Suisse Master which was host to a very famous blunder.

Then a repeat of the 1995 World Championship takes place in the semi-final with Anand eager to eliminate Kasparov. With Anand needing a win, he plays the Najdorf – Kasparov’s own favorite weapon – and Garry immediately goes for the attack with an aggressive pawn storm followed by bringing his Queen and Rook to the h-file in a direct attempt at checkmate.

However, Anand seems to have everything covered and it’s clear a sacrifice will be required to rip open the defenses. But do the sacrifices work or will Anand simply be taking free material? The game is ultimately decided by a brilliant move that catches commentators Daniel King and Nigel Short by surprise.

In the Credit Suisse Masters 1996, Kramnik comes up against English GM Jon Speelman whose irregular style causes him tremendous difficulties. Judit Polgar produces an attacking masterpiece to set up a semi-final with Kasparov and Anand is on fire too.

Yet again Anand and Kasparov have to face each other and this encounter sees a series of events that has to be witnessed to be believed.