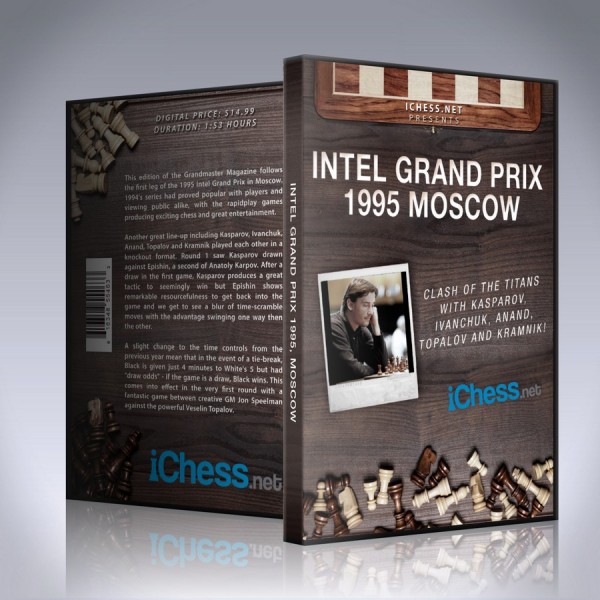 This edition of the Grandmaster Magazine follows the Intel Grand Prix Moscow in 1995. 1994’s series had proved popular with players and viewing public alike, with the rapidplay games producing exciting chess and great entertainment.

This edition of the Grandmaster Magazine follows the Intel Grand Prix Moscow in 1995. 1994’s series had proved popular with players and viewing public alike, with the rapidplay games producing exciting chess and great entertainment.

Another great line-up including Kasparov, Ivanchuk, Anand, Topalov, and Kramnik played each other in a knockout format. Round 1 saw Kasparov drawn against Epishin, a second of Anatoly Karpov. After a draw in the first game, Kasparov produces a great tactic to seemingly win but Epishin shows remarkable resourcefulness to get back into the game and we get to see a blur of time-scramble moves with the advantage swinging one way then the other.

A slight change to the time controls from the previous year means that in the event of a tie-break, Black is given just 4 minutes to White’s 5 but had “draw odds” – if the game is a draw, Black wins. This comes into effect in the very first round with a fantastic game between creative GM Jon Speelman against the powerful Veselin Topalov.

This tournament also features the incredible King’s Gambit win by Morozevich over Anand, with sacrifice after sacrifice overwhelming the future World Champion.

Daniel King and Maurice Ashley provide commentary and analysis to some of the most exciting chess ever recorded.