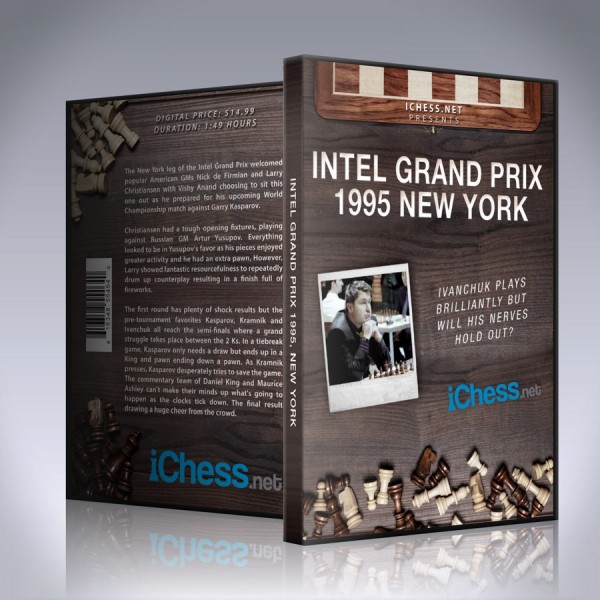 The Intel Grand Prix New York welcomed popular American GMs Nick de Firmian and Larry Christiansen with Vishy Anand choosing to sit this one out as he prepared for his upcoming World Championship match against Garry Kasparov.

The Intel Grand Prix New York welcomed popular American GMs Nick de Firmian and Larry Christiansen with Vishy Anand choosing to sit this one out as he prepared for his upcoming World Championship match against Garry Kasparov.

Christiansen had tough opening fixtures, playing against Russian GM Artur Yusupov. Everything looked to be in Yusupov’s favor as his pieces enjoyed a greater activity and he had an extra pawn, However, Larry showed fantastic resourcefulness to repeatedly drum up counterplay resulting in a finish full of fireworks.

The first round has plenty of shock results but the pre-tournament favorites Kasparov, Kramnik, and Ivanchuk all reach the semi-finals where a grand struggle takes place between the 2 Ks. In a tiebreak game, Kasparov only needs a draw but ends up in a King and pawn ending down a pawn. As Kramnik presses, Kasparov desperately tries to save the game.

The commentary team of Daniel King and Maurice Ashley can’t make their minds up what’s going to happen as the clocks tick down. The final result drawing a huge cheer from the crowd.

The Intel Grand Prix was a series of knockout rapidplay events played in 4 cities: Moscow, New York, London, and Paris. This edition of Grandmaster Magazine ends with an insightful interview with the eventual winner.