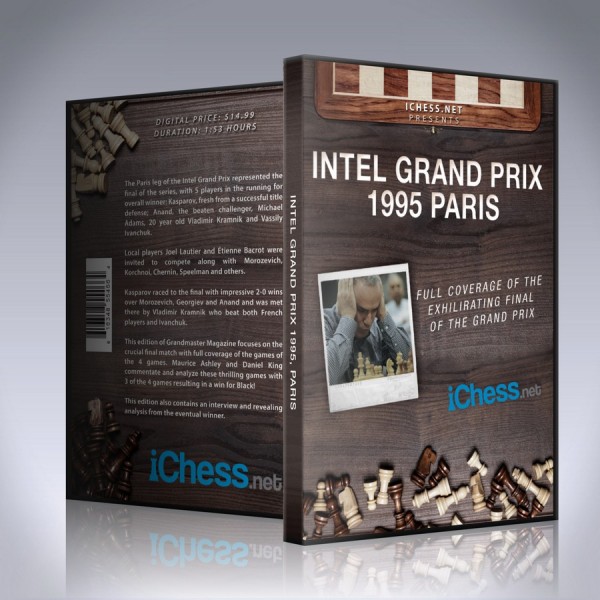 The Intel Grand Prix Paris 1995 represented the final of the series, with 5 players in the running for overall winner: Kasparov, fresh from a successful title defense; Anand, the beaten challenger, Michael Adams, 20-year-old Vladimir Kramnik, and Vassily Ivanchuk.

The Intel Grand Prix Paris 1995 represented the final of the series, with 5 players in the running for overall winner: Kasparov, fresh from a successful title defense; Anand, the beaten challenger, Michael Adams, 20-year-old Vladimir Kramnik, and Vassily Ivanchuk.

Local players Joel Lautier and Étienne Bacrot were invited to compete along with Morozevich,  Korchnoi, Chernin, Speelman, and others.

Kasparov raced to the final with impressive 2-0 wins over Morozevich, Georgiev, and Anand and was met there by Vladimir Kramnik who beat both French players and Ivanchuk.

This edition of Grandmaster Magazine, “The Intel Grand Prix Paris 1995”, focuses on the crucial final match with full coverage of the games of the 4 games. Maurice Ashley and Daniel King commentate and analyze these thrilling games with 3 of the 4 games resulting in a win for Black!

The Intel Grand Prix was a series of knockout rapidplay events played in 4 cities: Moscow, New York, London, and Paris. This edition also contains an interview and a revealing analysis from the eventual winner.