7 Things to Do Before Starting an Attack 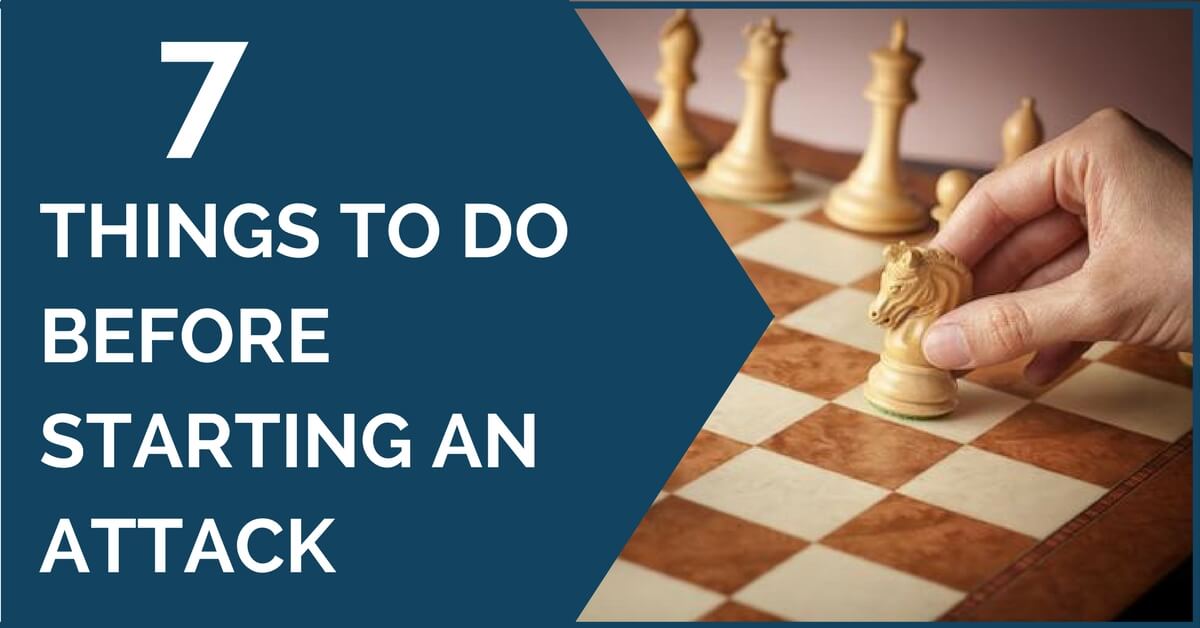 Every player has a different style of play and types of positions he/she likes or manages better.

From our own and our students’ experience, most amateur players like to attack and they usually try to start an attack in every game they play.

While there’s nothing wrong with having an aggressive style, not every type of position is suitable for such play.

Before starting an attack it is important to assess the position and pay attention to a few details that usually tell you should handle it.

Needless to say, this is probably the most important rule when it comes to starting an attack. You have to make sure that your pieces are developed and you won’t run out of “bullets” at the critical moment. An attack can’t be conducted with only a couple of pieces; you need to make sure that every piece is ready to join it.

Once you have finished your development, it is important that you improve the position of your pieces. Bring them closer to the enemy king or make sure that they are pointing that way. Once you’ve done this, you will see that the attack will develop much easier and suddenly all the tactics will work in your favor.

One practical advice we can give you is that it is usually better to first improve the position of every piece that you can and only after this start throwing the pawns.

Why is this important?

Because pawns usually need support in order to succeed in their quest and failing to do so might only result in some horrible weakening of your own position. This might only give your opponent a target of attack and hand him over the initiative.

In order for an attack to be successful, you need to first weaken your opponent’s king position. Organize your forces so that he will be forced to move one of his castle’s pawns. You can do this with pieces only or by combining the attack with pawns. For example, a typical plan to do so is pushing the h pawn until the 6th (3rd) rank.

Once you have forced a pawn move, you will have a clear target of attack and it will be easier to open the rival king.

Along with the development, this is another very important feature to pay attention to before deciding to start an attack. Remember that if you have a position with castles on the same side and you will need to open your king in the process, it is only safe to do so if the center is closed and will most likely remain closed. Otherwise, if the center becomes open it will be your own king that might need to get some extra protection.

Also, look at the existing pawn chains and decide on which flank you should attack. If you are not familiar with this important principle, take a look at our previous article on pawn structures and attacks.

If you have done/ checked all the above and decided that starting an attack will most likely work in your position, take one more look at your opponent’s plans and how he could try to stop you from achieving yours.

Identify his potential active ideas that might give him the initiative. Once you’ve done this, try to build your plan so that you stop his at the same time. Keep the initiative at all moments and don’t allow him to get active.

This idea is closely connected to the one above. If you have already started the attack and you have some pressure, look for moves that keep increasing it and force your opponent to take measures. Don’t give him time to breathe; such decisions might result in loss of the initiative and even of the advantage you had.

We hope that the advice above will help you correctly build and conduct an attack in your future games; there are always exceptions to the rules, but most of the time the ideas presented will work.