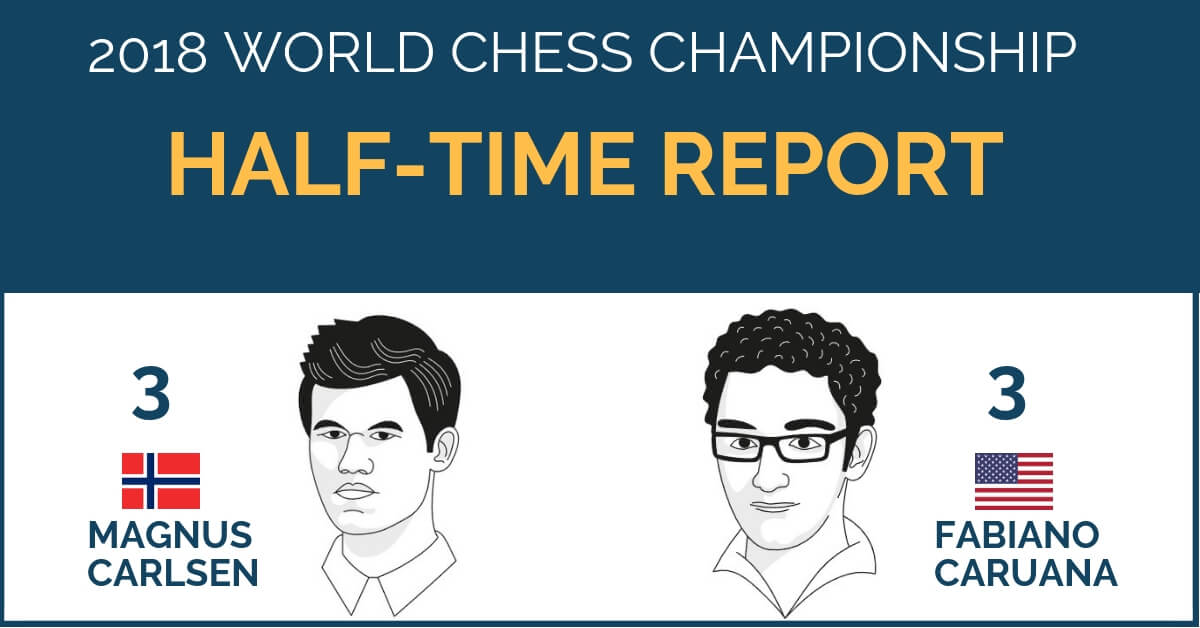 The World Champion, Magnus Carlsen, and challenger Fabiano Caruana tied at 3-3 at halftime in the World Championship match in London. The match has started with Caruana playing white. He decided to go for Rossolimo line against Sicilian, something he was consistently repeating in all 3 white games without much success.

After Carlsen was playing well-known ideas, suddenly white got worse and were losing for the big part of the game.

Somehow the World Champion has missed all the possible wins and Caruana escape. This first game had shown a few things. How nervous was the challenger and how far from his best is the Champion, something which was seen last month in Greece, where he played in European Club Cup.

There is an interesting pattern

In his 1995 match against Garry Kasparov, Viswanathan Anand scored the first win in game 9, in 2016 Sergey Karjakin broke through against Magnus Carlsen in game 8, and Boris Gelfand followed six draws against World Champion Anand with a game 7 win in 2012.

(Did I mention that after these deadlock-breaking wins, the challengers did not win another game and all lost their matches?)

In the next 4 games, it was relatively quiet and they were drawn, making many fans calling for more action and the familiar claims that the chess is dead and all the games are a draw and the players have to switch to rapid and blitz games already.

After five consecutive draws, the challenger went as close as possible to take the lead against Carlsen in the sixth game but was stopped by the heroic defense by the World Champion.

The game ended in a draw after more than 6 hours and 80 moves, leaving the match score tied at 3-3 and a capacity crowd heading home more than entertained.

The players will enjoy a rest day on Saturday before resuming battle on Sunday. At halftime, the chances are looking even.

Carlsen missed plenty of chances in game 1 but since then has generated very little. Caruana, on the other hand, has been outplayed in all his white games, he had chances only in game 6. Most likely the match will be decided from one game or even a single error, as the tension rises and the players become more tired.

The media coverage of the match is great.

They have been reports all over the world. CNN and the English media made reports about the match even in this very important moment with the Brexit deals and cabinet problems.

After a modest turnout on day one, the crowds at The College in Holborn have been consistently high. However, the venue is simply not suitable for older spectators, and some were far from pleased.

The timeshare policy, launched without warning last Saturday, caused some angst but now visitors with general admission tickets are warned that they will only be allowed into the main theatre to watch the players in half-hour shifts.

After some ups & downs in first 6 games, neither capitalized their winning opportunities. In the final 6 games, it will be about who has the biggest heart, toughest nerves, and strongest will to win! The biggest prize in chess is within their grasp.

Both Caruana and Carlsen will be grateful for Saturday’s rest day after Friday’s taxing affair before the match, the first world championship clash between the sport’s top two players in 28 years, resumes on Sunday with the champion playing as white in Game 7.