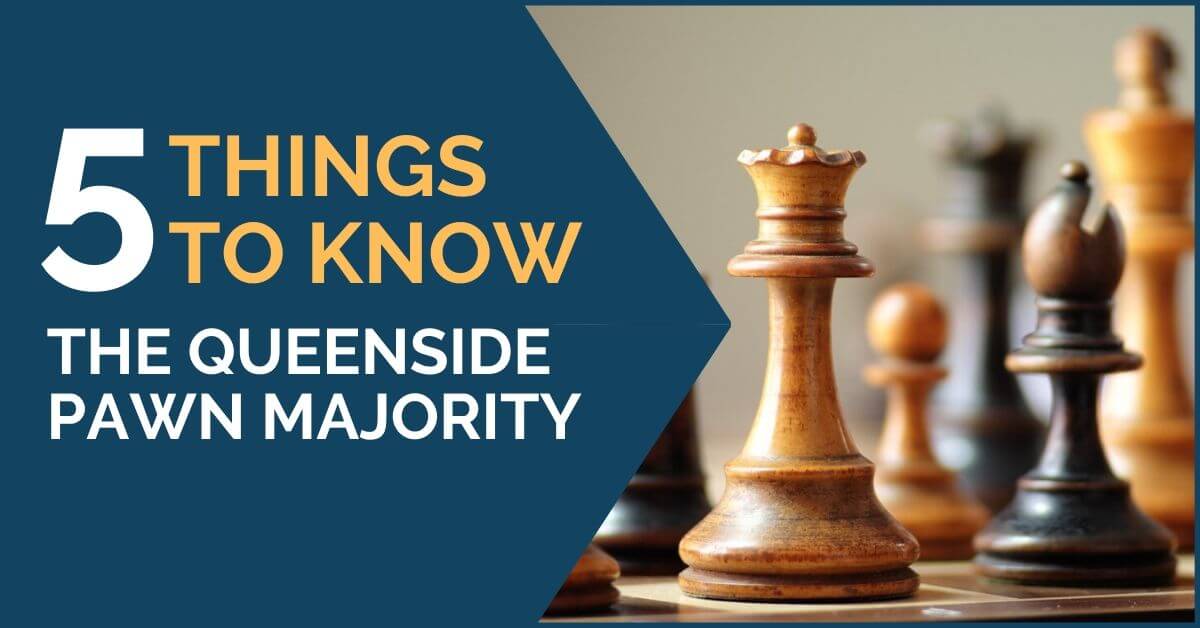 For example, if your opponent has the bishop pair, then you should do your best to keep the center closed or, if this isn’t possible, try to at least liquidate all the pawns on one of the flanks.

It is well-known that bishops are strong in the position where the center is open and there are pawns on both sides of the board.

The pawn structure is also one of the things to consider when transitioning into an endgame. If you are wondering which pieces to trade or if to trade at all, the structure can again be the answer. In this article, we are going to talk about an important pawn formation that appears very often in our games – the queenside pawn majority. This means that we have an extra pawn on the queenside, while our opponent will have it on the kingside.

In this type of structure there are a few important things to keep in mind:

One of the main advantages of this majority is that it gives you the possibility of creating an outside passed pawn in the endgame. Although this doesn’t automatically mean that you are winning, it can be an important plus in the endgame and can be used to slowly improve your position and put pressure on your opponent.

2.Works great in combination with the bishop pair.

The queenside pawn majority is a slight plus itself, but it can become even stronger with the support of the bishop pair. The two bishops help the pawns advance, while a passed pawn can be a monster in such positions. Another thing to keep in mind is that in many positions, the control of the d file is also very important.

The pawns can provide outposts for you to take over this file or you can combine threats on both queenside and center to increase your advantage.

3.Can be used in the middlegame to gain space on the queenside.

Although we mentioned the pawns can be particularly strong in the endgame, they can also be used to get an advantage in the middlegame. When advanced at the right moment and supported by your pieces, they can help gain space and push your opponent’s pieces into passive squares. You must do this with care, though, as you don’t want to weaken your position and give your opponent a target of the attack instead of something to worry about.

4.Pay attention to your opponent’s counterplay.

This is something to keep in mind in any position, not just here, but in this case, the rival’s plan is usually clear. He will want to stop your pawns from advancing or weaken your structure by starting an attack himself. This is known as the minority attack and it’s something you have to look out for.

5.Always try to combine it with a second advantage or use it in order to provoke weaknesses in your opponent’s position.

The principle of the two weaknesses – an important guideline in any position you have on the board. Whenever you have a little advantage, keep your calm and look for accumulating more. In this case, the queenside pawn majority can be used as a “distraction” for the opponent while you look for more on the other side of the board.