5 Most Important Opening Ideas You Must Know 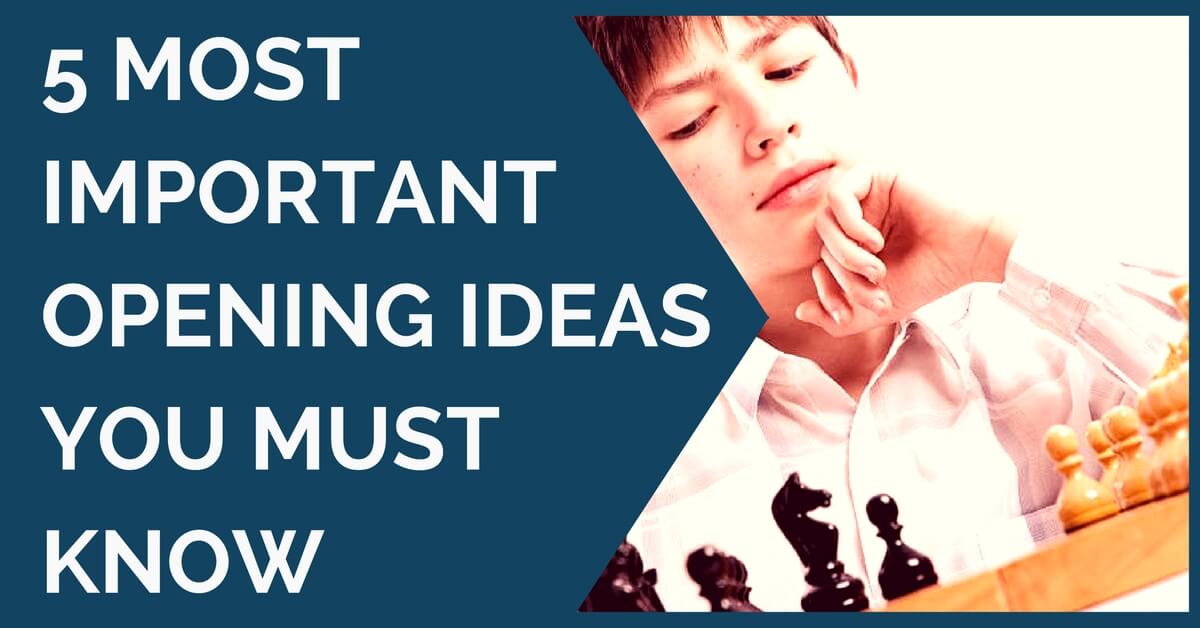 Opening Ideas: Chess is a game of rules and principles supported by the reality of concrete moves. To play well is not only necessary to calculate at a reasonable level but also to have a fine understanding of the concepts and principles of the game. Club players often base their skills solely on seeking moves, quick tactics with immediate gains, or trading pieces for the sake of trading.

In order to become a master, positional comprehension has to be enhanced by training and applied on the chessboard. In this article we are going to go through the main 5 principles a beginner should know in the opening and give you some practical advice as well.

The following principles should always be respected:

This is a key element in the opening. The main goal in the opening phase is to get as many pieces out as you can and get your king safe, which is linked with getting your rooks developed as well. Moving the same piece in the opening several times is known to be a mistake.

Starting an attack with your king in the center is often a bad idea. Making too many pawn moves without your pieces developed is usually a waste of time.

The opening is also based on fighting for the center. There are different strategies to do this. One is a la Reti, by playing flank openings such as the Reti opening where white first fianchettos and castles and then proceeds to attack the center with pawns and put pressure with pieces from a certain distance.

The same case can be seen in modern openings with 1…g6 or 1…d6. Another strategy is the classical development towards the center that occurs after the moves 1.e4 or 1.d4 where both sides begin a constant struggle for the central key squares.

Greed is not of good quality during the opening. Although in many gambits the refutation lies in accepting the gift, our advice is to sidestep these offers and focus on finishing your development. For example in my career I have never accepted the pawn in the Morra Gambit (1.e4 c5 2.d4 cxd4 3.c3).

I always chose to play 3…Nf6 or even 3…d3 not because I think these were better moves than 3…dxc3, but because they definitely lead to safer positions in which you can play based on logic rather than constantly try to defend against your opponent’s initiative. This has served me well in the past and I think it’s a piece of good advice for club players; do not give your opponent the satisfaction of showing off their tactical tricks.

You’re trying to develop your pieces during the opening, that’s your goal. However, we must not hesitate to interfere with our opponent’s development as well if we can. If you have a chance to gain space or to prevent your opponent from castling you should do so, even at the cost of one or two tempi. Our opponent’s lack of development is, in some way, our advantage too.

5. Opening Ideas: The queen moves in the opening

I’m reluctant to the cliché of telling you “don’t get your queen out in the opening” when there are examples like the Scandinavian when moving with the queen is totally accepted. However, the main thing to avoid is playing with your queen in positions where your opponent can gain development tempi by attacking it. So the general rule means just this, don’t get your queen out early if it is not necessary and your opponent can attack it.

To summarize this article I would like to show you a game in which my opponent took far too many liberties and I punished him in the opening. We can see in the following game some of the points explained above altogether. See more details here:

We hope you have enjoyed this article and as usual, feel free to leave your comments with your thoughts.

We also recommend reviewing What is New in Theory?.

That seems to be like a lot of things, and that is. But no worries, we have made it easy for you. Our comprehensive training course covers it all and much more.
Sign up for 21 Day Training right now!