How to Calculate in Chess: Complete Guide 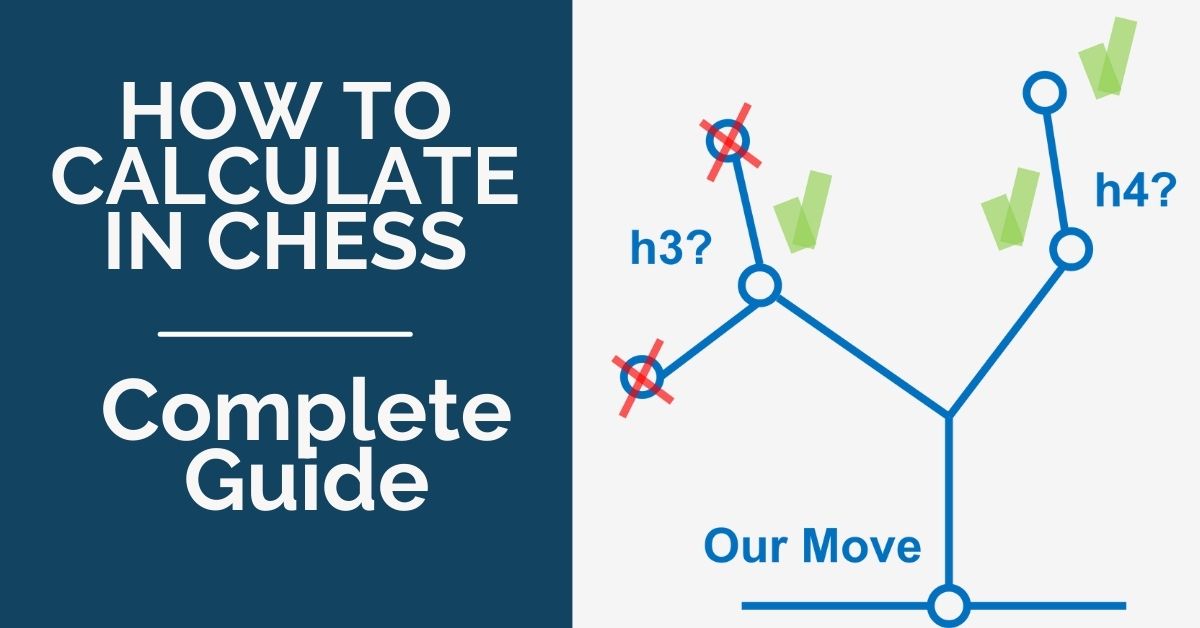 How to calculate in chess? First, let me ask you… How many chess positions can possibly arise on the board? Well, let’s count. White can choose between 20 first moves. Black can reply in 20 different ways too. This already creates 400 possible positions. White’s next turn can increase this number approximately up to 8 000. Black can make, for example, 100 000 from it. Next, it is millions already. Let’s stop here.

Different scientists estimated the number of possible positions in chess to be bigger than the number of atoms in the observable universe!

It includes illegal positions but is still incredible and shows how deep and unpredictable this game is. Also, it shows why calculation is one of the most important skills in chess. This is the skill that can compensate for many other chess weaknesses. This is the tool you can use to realize your strategic ideas. It is what helps you navigate in the jungles of variations on the board.

In this article, we will discuss how the process of calculation works and what techniques the best players use. Let’s start with a little bit of history.

The Beginning: How to Calculate in Chess

Alexander Kotov was a Soviet grandmaster and one of the strongest players of his time. He played a lot of beautiful games and won a lot of chess tournaments. One of the greatest things he gave to the chess world was his insightful books. In “Think Like a Grandmaster,” he thoroughly discussed the way a player should think during the game. The book was published in English in 1971 and came out as a revelation: one of the world’s best players shared his thought process for the first time!

The technique suggested by Kotov was used by many strong players for a long time but remained a secret for the broad audience.

He called it the candidate moves technique. The idea was to start calculations by making a list of sensible moves in the position and examining them one at a time. Such an approach is common these days and helps players see alternatives and pay attention to different options.

One of its main features is structural thinking. Your thought process becomes systemic and not random anymore.

After choosing a candidate move for yourself, Kotov suggested you look for different candidates for the enemy side as well. You repeat this process until the arising situation seems clear and can be evaluated. It might remind you of how we counted possible positions at the beginning of this article. If you think it is too hard to follow Kotov’s approach, you might be right.

Types of Positions for Calculation – Part 1

First of all, let’s see what kinds of positions can arise on the board. If you look at the games of strong positional players such as Anatoly Karpov or Jose Raul Capablanca, you will see they often had calm maneuvering positions without confusing complications. In such simple positions where most of the moves are of the same value, it doesn’t make sense to calculate long variations.

Strong players usually have a plan of placing their pieces and calculate two-three moves ahead to make sure it is a good way to proceed and there are no blunders. It is important to note they find and evaluate candidate moves by using their knowledge of plans and understanding of the position. They consider for both sides only those moves that improve the position the most.

Now imagine going through the games of such creative attacking players like Mikhail Tal or Alexei Shirov. You would see a lot of interesting possibilities for every side at every move, and it would be really hard to assess them. In such situations, you should calculate at the maximum of your abilities.

Sometimes the positions are so complicated that it is just impossible to calculate everything till the end. In this case, players rely on their intuition and choose the moves that are the most difficult to deal with for their opponents. After all, chess is a game and you don’t have to play the best moves all the time.

Your moves have to be better than your opponent’s ones.

Types of Positions for Calculation – Part 2

No matter what your style is, you will have to make both simple and hard decisions during every game. To illustrate the thought process in such cases, Alexander Kotov used the trees of variations. For example, here we see what Kotov called a column: 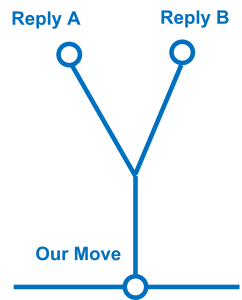 Let’s say you took a piece, your opponent only has two ways to take it back. The calculation will not take much time. 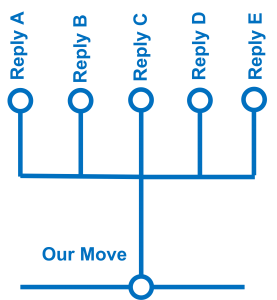 It is a very common situation. You start analyzing your move and see 5 replies for your opponent. Kotov suggested that you calculate each of them methodically and then make a conclusion.

The most complicated scenario was called a jungle: 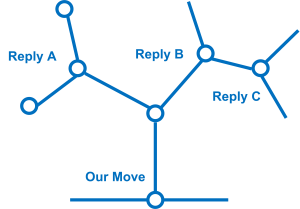 This is the real challenge for your calculation abilities. It requires patience, tactical awareness, board vision, and time. In modern chess, the latter one is of the highest importance and indicates the bottleneck of Kotov’s approach.

How to Calculate in Chess – Modern vision

Many authors and chess players disagreed with some parts of Kotov’s method. It is unimaginable to do this machine-like search at every move throughout the whole game. It seems to be too time-consuming. For example, great Soviet and Russian coach Mark Dvoretsky suggested using elimination, comparison, and logical assumptions to ease the process of calculation.

Elimination: How to Calculate in Chess

Elimination is a good friend of yours in complex situations and when defending. You can focus on the disadvantages of the candidate’s moves and choose the remaining one. You don’t have to prove it is bad if all the other moves are bad for sure. 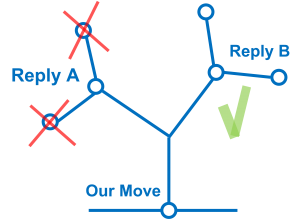 Comparison: How to Calculate in Chess

Comparison can save a lot of time and energy when your options can lead to the same positions with small differences. In this case, you can think conceptually and focus on the differences only. Should you move your pawn to h3 or h4? Think where it will stand better after a few moves. 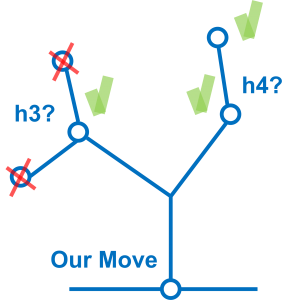 Logic: How to Calculate in Chess

Using your logic in the calculation is self-explanatory, but let me give an example too. 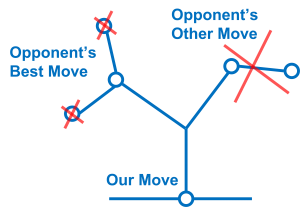 As you could notice, calculation heavily relies on your ability to see not only your moves but also your opponent’s ones. Some players are so good at recognizing and preventing the opponent’s ideas that it is nearly impossible to do anything against them. The notable examples are the world champions Anatoly Karpov and Tigran Petrosian, who developed their prophylactic thinking to the maximum and achieved the greatest results.

On the whole, it seems to make the most sense to use the candidate moves technique to see what continuations deserve the attention for both sides. This way you will not miss anything important. Start calculation from the move that seems the most attractive to you. This attractiveness usually comes from your general chess understanding. You can use the tools mentioned above to make your thought process less time-consuming and more practical.

The calculation is a complex skill that greatly affects the results of every chess player. The approach suggested by Alexander Kotov proposes many useful tools (especially the candidate moves technique) and involves a methodical search of moves for both sides. It is clearly good for those who only start learning calculation; it fosters a disciplined and organized thought process. After a lot of practice, it becomes much easier to navigate through the arising complications.

You will be able to calculate without using this method consciously and directly. In a practical game, it is unachievable to employ Kotov’s algorithm after every move.

It makes sense to use it as an auxiliary tool in critical situations or when feeling stuck. You also should always remember to consider your opponent’s ideas and use your prophylactic thinking. Dvoretsky’s idea to use logic, comparison, and elimination will also prove helpful during the game.