Power of opposition is the topic we are going to talk about today. It is probably the single most important technique in king & pawn endgames.

If you want to win more chess games you should spend more time studying chess fundamentals. As Stephan Gerzadowicz said ‘openings teach you openings, endgames teach you chess ‘. In our last week’s discussion, we studied nuances of the opposite color bishop endgames.

If you played chess long enough you probably heard things like ‘white won because they had an opposition’ or ‘it led to a draw’. What do these mean?

Simply speaking, it is a position when the kings are facing each other either horizontally or vertically. There should be an odd number of squares in between the kings for opposition to exist. The side that possesses the right of move does not have the opposition in the diagrams below. 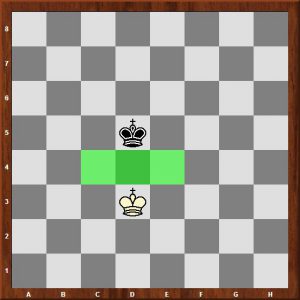 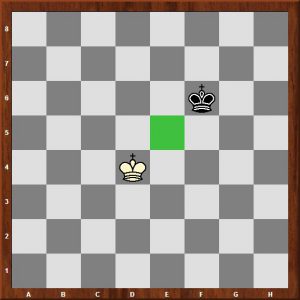 On the diagram below white have the opposition and black needs to give up space:

Our next example shows the use of opposition from the practical point of view. Black is a pawn down. But, with the correct use of opposition, the stalemate position can be achieved saving the game.

This example shows the use of this technique for white to promote the pawn and to prevent black from recapturing it or gaining the opposition.

The opposition is a powerful endgame weapon if used correctly. By knowing when and how to use it you can save yourself from losing a game or you can win a game forcing the opponent’s king away from your passed pawn.

Great examples, thank you. The 21 day course is the first I learned of this principle,however, that first endgame example in the lessons is hard to understand.

Awesome! Glad you’re able to benefit from this one! Let me know if you have any other confusions, we can clear it out!

Opposition is a bad thing for whoever has to move first.

Generally speaking, the side that possesses the opposition has an advantage since they can penetrate the opponent’s position. Therefore, it is good for the one who has it.

So? Is opposition a good or a bad thing?