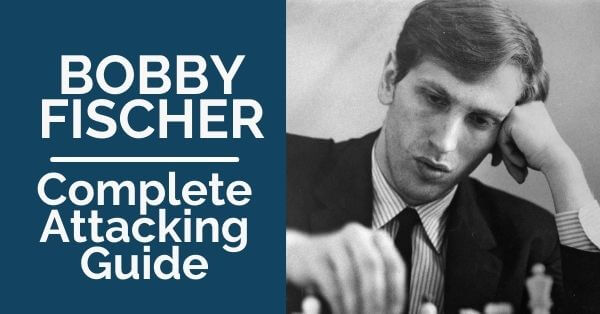 Bobby Fischer is considered to be one of the best players of all time.

He is an important personality of his time and many people, chess players or not, know who he was. Although he retired from chess rather soon, he left behind a great legacy in the chess world.

Most people consider him a genius and he showed his amazing talent from a very early age, by winning the US championship at only 14 years old, in 1958. That same year he became a Grandmaster, the youngest at that time.

He is also famous for a later US title, the one in 1964. He dominated the championship and won it with a perfect 11/11, becoming the only player to have achieved such a performance. After another series of convincing wins in the Candidates matches against players like Taimanov, Larsen, and Petrosian, Fischer became World number one on the FIDE rating list in 1971. At that point, he had no less than 125 rating points above Boris Spassky, the holder of the World Champion title at that time.

Regarding his style, Bobby Fischer was a complete player. He had a very good understanding of the game and brought many new and original ideas to the openings he played. He was considered to be an expert in the Ruy Lopez and the Najdorf Sicilian (with black). You can learn everything from his games – opening ideas, middlegame play, how to attack, and also how to play the endgame.

In this article, I’m going to show you some of his most memorable wins and see how he conducted a successful attack.

One of his most famous wins is the one against Donald Byrne, in New York, in 1956. The game was a Grunfeld and the idea Fischer played is well known until today:

White has just played the move Bf4-g5, completely ignoring his development. Instead, a move like 11.Be2 would’ve been better – white is looking to finish getting his pieces out, castle, and then try to use his space advantage. At first sight, 11.Bg5 looks dubious (moving again a piece that’s already been developed), but one wouldn’t suspect it is actually a losing move!

Fischer was very good at spotting all the tactical motifs in the position and here the bishop on g5 becomes a target. So does the uncastled king on e1. Black, on the other hand, had his pieces well placed and coordinated, which makes the tactics work in black’s favor. As Fischer himself said: “Tactics flow from a superior position.” And this position is just one clear example. The game continued with 11…Ne5!!

Now, because of the geometry of white’s pieces, the move 12.Nxa4 simply loses. Black will follow up with 12…Nxe4, hitting both on the white queen on c5 and dark-squared bishop on g5. The bad news for white is that the queen must also keep an eye on the a5 square (…Qa5+, picking up either Bg5 or Na4 is coming) and that’s simply impossible.

In the game, he played 12.Qa3, hoping to keep some chances alive by taking on e7 after 12…Nxc3 13.bxc3 Nxe4 14.Bxe7. It’s very instructive to see how Fischer does not back down from sacrificing this exchange for the initiative. White’s king will still be in the center and he will get a lot of pressure in return. He continues to play very actively and precisely. Every move comes with a gain of tempo, creating big problems for his opponent who needs to defend a very difficult position. Playing the whole game in the same spirit, Fischer also sacrifices his queen a few moves later in order to hunt down the white king. A true masterpiece!

In 1967 Fischer scored another beautiful victory against Donald Byrne, this time in a Sicilian Najdorf:

White has just played 13.0-0, but as we will see, his king is far from safe on g1. The premature advance of the f pawn has weakened the kingside considerably and Fischer is ready to use this: 13…h5! The threat is h4, winning the pawn on e4.

White is more or less forced to reply with 14.h4, creating another target on the kingside that black uses to open the h file against the white king: 14…b4. If he doesn’t want to lose the e4 pawn white must take first on f6: 15.Bxf6 Bxf6 16.Nd5.

The problem is that h4 is now hanging and all of black’s pieces just keep coming in. After 16…Bxh4 17.Nxh5 we reach another important moment of the game:

Again, we see how Fischer is not backing down from complications and keeps going forward, bringing more pieces in the attack: 17…Qg5! This might seem like a natural move, but white has an interesting resource that had to be calculated in advance – 18.f6 (the idea is to reply Rxh5 with Rf5).

The game continued with 18…g6 19.Ng7+ Kd8 and, even though white has managed to bring a knight all the way to g7, he has no real threats against the black king. Fischer went on to win the game convincingly:

Finally, I want to show you a game where Fischer punishes his opponent’s inaccurate play in a difficult position:

This might look like a common theory. It is well known that here black’s idea to take advantage of white’s overextension in the center is by playing 7…c5 8.dxc5 Nc6! However, according to my database, Fischer’s game is the very first one played in this line. The game continued with 9.cxd6 exd6 and here white went wrong with 10.Ne4. Nowadays it is known that white’s best move is 10.Nf3, getting more pieces out.

The problem with the game move is that it allows black to increase his development advantage and exploit the bad position of the king on e1. In the end, things were decided on the e file:

Black is winning in more than one way, but Fischer found the most precise route: 21…Rxe3! 22.Rxe3 Rxe3 23.Kxe3 Qxf4!! White can’t capture the Queen due to Nh5, checkmate.

From the games presented here, it is clear that Fischer had a very good sense of the initiative and was always looking to get the upper hand. He was not afraid of sacrificing material if it meant his opponent will end up in a difficult position. Of course, very precise calculations backed up all of this. Even now, most of his moves are the computer’s first choice.

Want to learn more about this topic? Make sure to read 17 Great Chess Quotes.

Another important “secret” to the success of his attacks is that he played with all his pieces. Notice how in every game each piece took part in the attack. Look at the two games against Byrne and you’ll see how each piece eventually joined the attack and helped win the game.