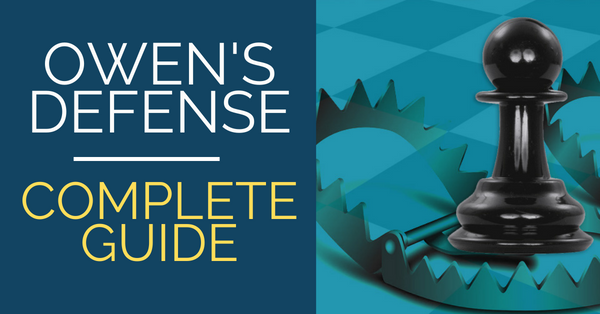 Owen’s Defense: When it comes to studying openings, most of the players look for shortcuts and skip studying the rare ones. It gives their opponents good chances to surprise them with off-beat openings. One such option is Owen’s Defense. It is a flexible hypermodern opening. Black allows the first player to conquer the center and plans to counterattack it later.

White usually defends the pawn with 3.Nc3 or 3.Bd3. Experienced players tend to prefer the latter. Let’s see what could be the issue with 3.Nc3.

After 3…e6, Black threatens to increase the pressure on e4 with …Bb4 and …Nf6. 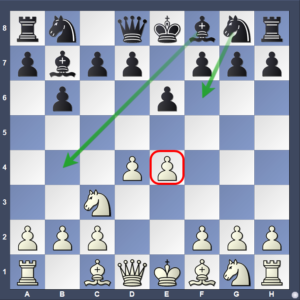 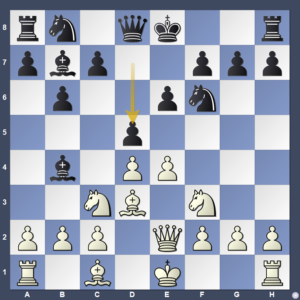 The game Eljanov – Carlsen (Douglas, 2017) continued 7.exd5 Qxd5 8.0-0 Bxc3 9.bxc3 Nbd7. White got a pair of bishops, but Black’s position was solid. Later, Magnus managed to exploit the better pawn structure and went on to win an excellent game. You can see it below.

In the diagram above, White could also play 7.e5. This move ensures the space advantage but allows Black’s knight on e4. The arising positions resemble the French Defense. Overall, Black seems to get enough counterplay here. 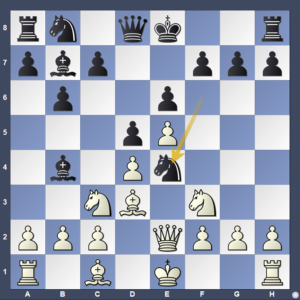 After 7…Ne4, White chooses between the calm 8.Bd2 and 8.0-0, which sacrifices a pawn for the initiative.

8.Bd2 can be met with 8…Bxc3 9.bxc3 Nxd2 10.Qxd2 Qe7, followed by …Ba6. Trading the light-squared bishops is usually a good idea for Black in French pawn structures like this.

8.0-0 was played by Teimour Radjabov against Vassily Ivanchuk (Eilat, 2012) and by Hikaru Nakamura against Timur Gareyev in the USA Championship, 2015. In both games, Black reacted correctly with 8…Nxc3 9.bxc3 Bxc3 10.Rb1 Nc6! The last move is important. Black attacks the pawn on d4 and gets the b4-square under control to ensure that the bishop can retreat home safely. Both games, after some complications, ended in a draw.

The idea behind 3.Bd3 is to avoid the unpleasant …Bb4 pin on the knight. How should Black react?

First, let’s look at what Black shouldn’t do and learn why. 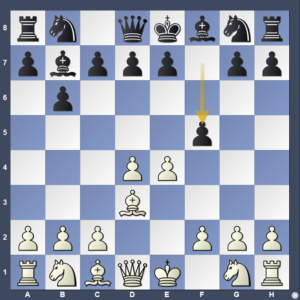 Black attacks the center, thinking that White can’t take the pawn because then …Bxg2 would win the rook. But this move actually loses!

4.exf5! Bxg2 5.Qh5+ White believes that the vulnerability of Black’s king is more important than the rook. 5…g6 6.fxg6 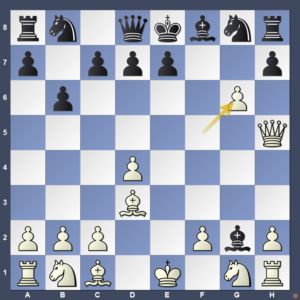 In the position in the last diagram, Black could play better: 6…Bg7 7.gxh7+ Kf8. But after 8.Nf3 or 8.Nh3, White would still have a winning position. 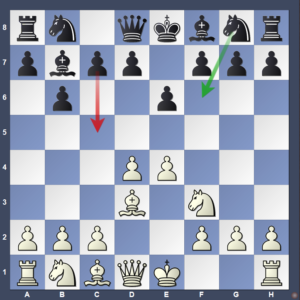 After 4…Nf6, White usually protects the e4-pawn with 5.Qe2. The move 5.Nc3 would allow 5…Bb4 and transpose to the lines discussed above. After 5.Qe2 d5 6.e5 Nfd7, the following position arises: 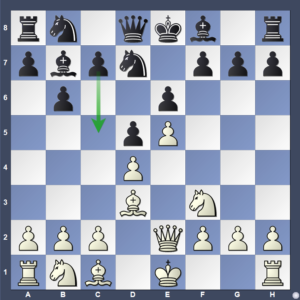 White has better chances thanks to the space advantage and harmonious piece placement. But Black plans to attack White’s center with …c7-c5 and hopes to get a typical French counterplay. This line was tried from the Black side by Nepomniachtchi and Mamedyarov, although in fast time controls. 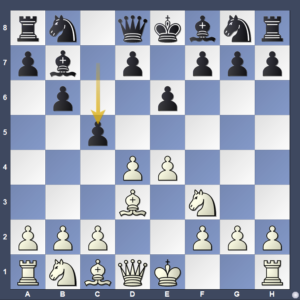 Now by a wide margin, White’s most popular move is 5.c3. The moves like 5.0-0, 5.Nc3, and 5.Qe2 allow Black to get a Sicilian type of position after 5…cxd4. It is a good outcome for Black because usually, people play Owen’s Defense to obtain counterplay and avoid long theoretical discussions. 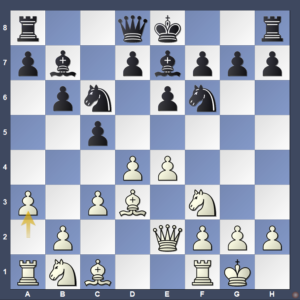 With the last move, White ensured Black wouldn’t be able to play …cxd4 followed by …Nb4. Also, now b2-b4 can be played at some point.

Black has main two main ways here. 8…d5 9.e5 Nd7 leads to the French type of position. It is a better version for Black than the ones we discussed above because, on the way to this position, White played not the most aggressive moves. 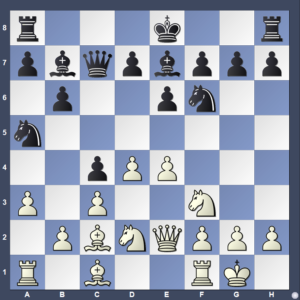 Objectively, White is better, but the position remains complicated. In 1992, the famous English grandmaster Anthony Miles played this position five times. Below, you can see one of his games.

The Transposition to the English Defense 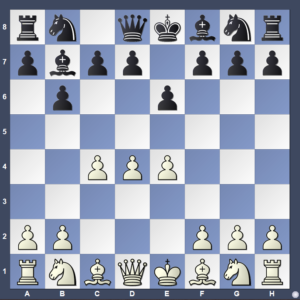 This position usually arises after 1.d4 e6 2.c4 b6 3.e4 Bb7 – from the English Defense. Now 4.Bd3 is a good move for White. Black can continue with 4…Nc6 5.Ne2 Nb4 or 4…Bb4+. With precise play, White gets better chances, but the variation is rare, and White often goes off the road quite easily. For example, after 4…Bb4+, White’s best move is 5.Kf1, but the normal 5.Bd2 is twice more popular in practice.

In the last diagram, another common move for White is 4.Nc3 (more than a thousand games with it in the database), but it is an inaccuracy. Now Black can pin the knight with 4…Bb4 and renew the threat to the e4-paw. After 5.Bd3, Black can use the idea we’re familiar with – 5…f5. Now it works much better for White. 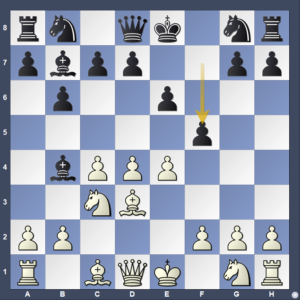 Above we saw how Owen’s Defense can transpose into the English Defense. It is also good to keep in mind that Black can opt for the Hippopotamus Defense. This opening is often taken as a joke, but it is a serious scheme and a frequent guest in grandmaster practice. Let’s see what it looks like. 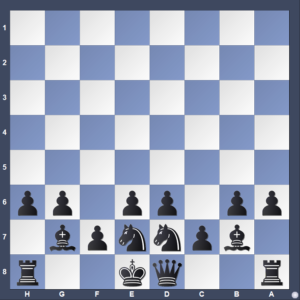 As you can see, it can arise from Owen’s Defense if Black decides to fianchetto another bishop too. Black’s position is flexible and can be played against any White’s setup. Black usually castles kingside and continues with one of the pawn breaks. Will it be …c7-c5, …d7-d5, …e7-e5, …f7-f5, or …g7-g5 – depends on White’s play. Black’s position is extremely solid, and White often struggles to find ways to break through. This scheme is a good backup for Owen’s Defense players.

Want to know more about Owen’s Defense? Look at 10 Reasons to Play It.

Owen’s Defense often serves as a surprise weapon and an attempt to make the game less balanced. It gives White a broad choice of options, which, on the other hand, gives them more chances to go wrong. Such a strategy works especially well if your opponent isn’t familiar with the theory. But as you could see in the article, Black gets double-edged positions even against White’s best play. Also, it can be effectively played against 1.d4. This all makes this opening an interesting practical choice.