The Tarrasch Defence according to super-GM Dubov 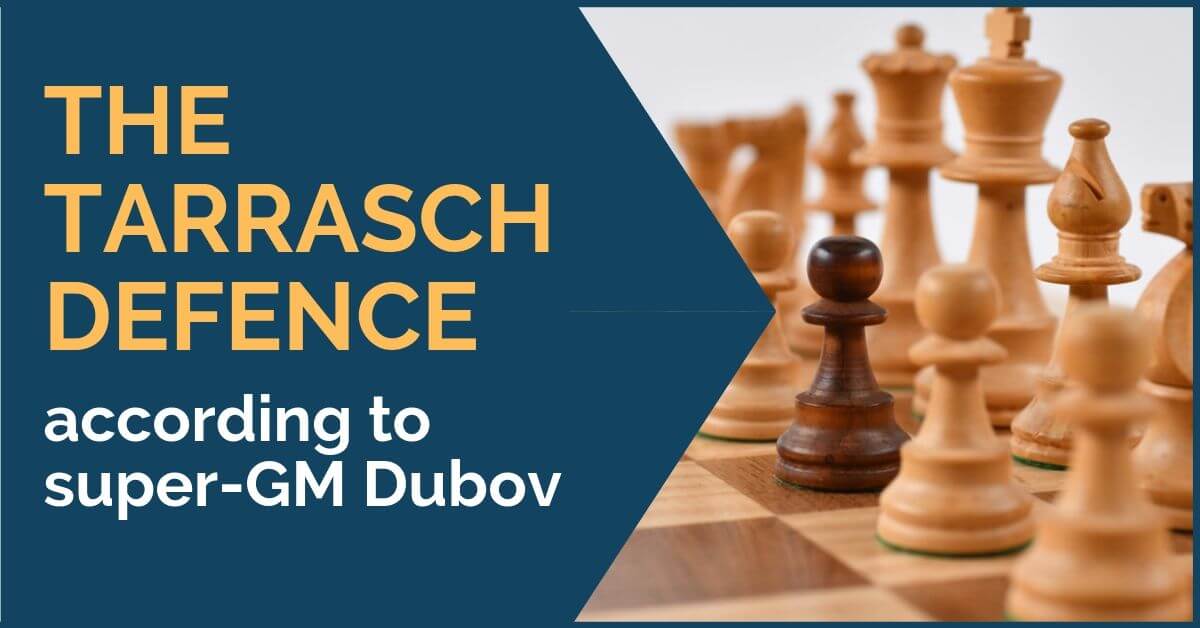 Tarrasch Defence is a neglected one. It had its glory days in the late 1960s when Boris Spassky used it first in his Candidates match against Geller in 1965 and then as a very efficient weapon in his title-winning match against Petrosian in 1969 when he scored 1 win and 4 draws with it.

The second champion of the Tarrasch Defence was another World Champion, Garry Kasparov, who scored phenomenal results with it in the early 1980s.

The fairy-tale came to an abrupt end when Kasparov lost two games (Games 7 and 9) with it against Karpov in their first match in 1984. He was generally OK after the opening, but these losses (the second one in Game 9 making the score 4-0 in Karpov’s favor) killed Kasparov’s affection for the opening.

With the increased technique, the existence of an isolated queen’s pawn was more and more considered a weakness, and its dynamic possibilities were somewhat forgotten. But as with everything in life, things change constantly and the strong engines on powerful hardware can prove something that previously was considered bad to be quite promising.

A very talented player with original opening ideas, he caught the attention of the World Champion and was part of his team for the World Championship match against Caruana. Carlsen’s choice of the Sveshnikov Sicilian as his main opening ever since is Dubov’s influence, as he has played the Sveshnikov and showed interesting ideas in it for quite some time now. Carlsen continued to give credit to Dubov and his ideas long after the match as he kept on using them to great effect.

After working with Carlsen, Dubov continued to produce original ideas. One of these is his quite unexpected sacrifice of the very isolated queen’s pawn that characterizes the Tarrasch Defence!

The very first game where this idea was seen was the first game of the second-round match Nakamura-Dubov from the Moscow Grand Prix knock-out tournament.

Nakamura avoids the Grunfeld, by that moment Dubov’s main opening against 1 d4.

We reach the normal position of the mainline of the Tarrasch Defence. Both Spassky and Kasparov and many other players have played 7…Be7 here automatically, which after 8 0-0 0-0 led to the tabiya of the Tarrasch Defence where White has the choice of several moves: 9 Bg5 (the move Karpov used to beat Kasparov twice in 1984, still considered the mainline), 9 dc, 9 b3, 9 Be3, 9 Bf4 and even 9 h3 (as played by Nakamura on more than 1 occasion!). Dubov, however, introduces a new concept.

While strictly speaking this is not new, the idea behind it is. Played sparsely before the engines took over, the idea is a very dynamic one. After 9 Nb3 Black is sacrificing the isolated queen’s pawn for activity (as both the pawn on d5 and the bishop on b6 are attacked) and the surprising thing is that it is not at first sight visible what Black can do against White’s solid and weakness-free position.

Dubov apparently surprised Nakamura with his innovative idea and wisely decided to sidestep it. He did not quite succeed as Dubov’s preparation finished one move before the game finished. But what happens if White just takes the pawn on d5?

If allowed the IQP should advance, as it fixes the pawn on e2 for possible counter-play along the e-file.

Another critical moment as Black is again sacrificing a pawn.

After 13 Re1(defending e2 in advance) h6 14 Nb6 ab 15 Bf6 Qf6 16 Bc6 bc 17 Qd4 White is a pawn up for what appears to be nothing, but the surprising move 17…Qd8! illustrates Black’s idea: in an open position the bishop is better than a knight, that knight will be limited after Black plays …c5, and the open a- and e-files offer enough activity for Black’s rooks.

I am sure that Dubov’s analyses went deep into this position proving empirically that Black has compensation with or without the exchange of queens.

Nakamura chooses another sensible plan. He plays for a positional advantage – he took the bishop on b6, thus obtaining the advantage of the bishop pair, and now wants to open the position for his bishops and eliminate the space-grabbing pawn on d4.

Of course, Dubov won’t oblige and he keeps playing for dynamism. Taking on e3 would give White all that he wants after 14…de 15 Be3 with a dream position.

A surprising decision, but one that puts the emphasis on the dynamic factors in the position. With this move, Black intends to keep the dangerous d3-pawn even at the expense of his structure. Now he has 6 (!!) isolated and/or doubled pawns. And, his whole structure is an irreparable mess. But, the pawn on d3 coupled with the active pieces more than compensates for it.

Bear in mind that Dubov was still in his preparation here!

After both sides finished development Black continues going forward. He defends the pawn on d3 and challenges the rook on c3.

Covering the d-file and hoping to round up the pawn on d3.

But Black’s activity is relentless. After

It was clear that Black has the initiative and Nakamura soon found it sensible to steer the game towards a draw.

The first outing of Dubov’s idea was a great success. But what happened when his opponents started to prepare against it?

Looking for more on this opening? Here are the 7 Best Games Played and this Opening with GM Marian Petrov.

We also recommend reviewing ChessBase Magazine #175 and 27 Most Powerful Quotes and Phrases That Describe Chess.