London System: 10 Reasons Why You Should Play it 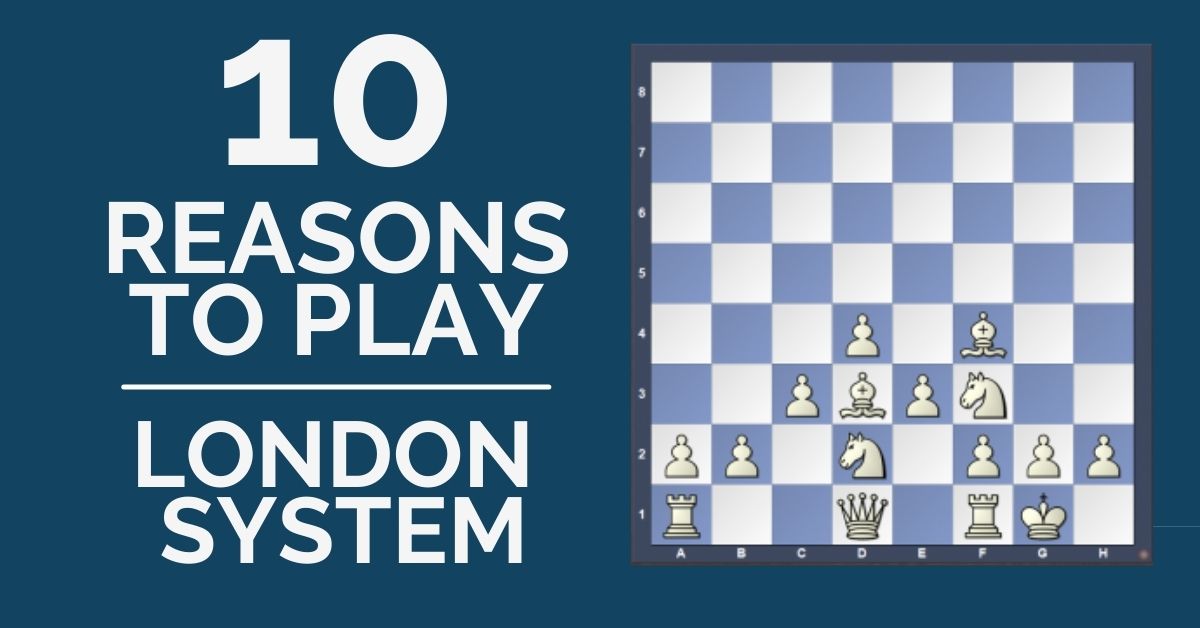 The London System for a long time was considered to be a harmless and unconventional opening for lazy players. Things have changed once the current world champion Magnus Carlsen started using it to beat the best players in the world. It immediately caught everyone’s attention, and the opening got a huge boost of popularity. Nowadays it has a lot of adherents of different levels. It is a safe, solid, but at the same time, aggressive opening.

It was first played in London, 1883, by James Mason, one of the strongest players of the 19th century, against Joseph Blackburn. But the system got its current name later when the strongest players in the world faced each other at the London Congress tournament in 1922. The system with Bf4 was featured in high-profile games there. Interesting, that one of such games was played between two future world champions – Alexander Alekhine and Max Euwe. White came out on top.

Since then, there have been many new developments in the London System. The opening is currently as popular as it has never been before. In this article, we will discuss what is so special about the London system and help you find out if this is a good match for you.

1.  London System is easy to learn

This is one of the main advantages of this opening.

You don’t need to memorize any forced lines to play this opening. Of course, if you know some theory, it is great and very helpful, but many people rely on the knowledge of plans and ideas only. The London System is often used to avoid mainstream theory and opponent’s preparation. In the Tata Steel Chess 2018, Magnus Carlsen opted for this opening to defeat Wesley So. After that, he posted a picture on Instagram and joked about his process of choosing what to play in the game. 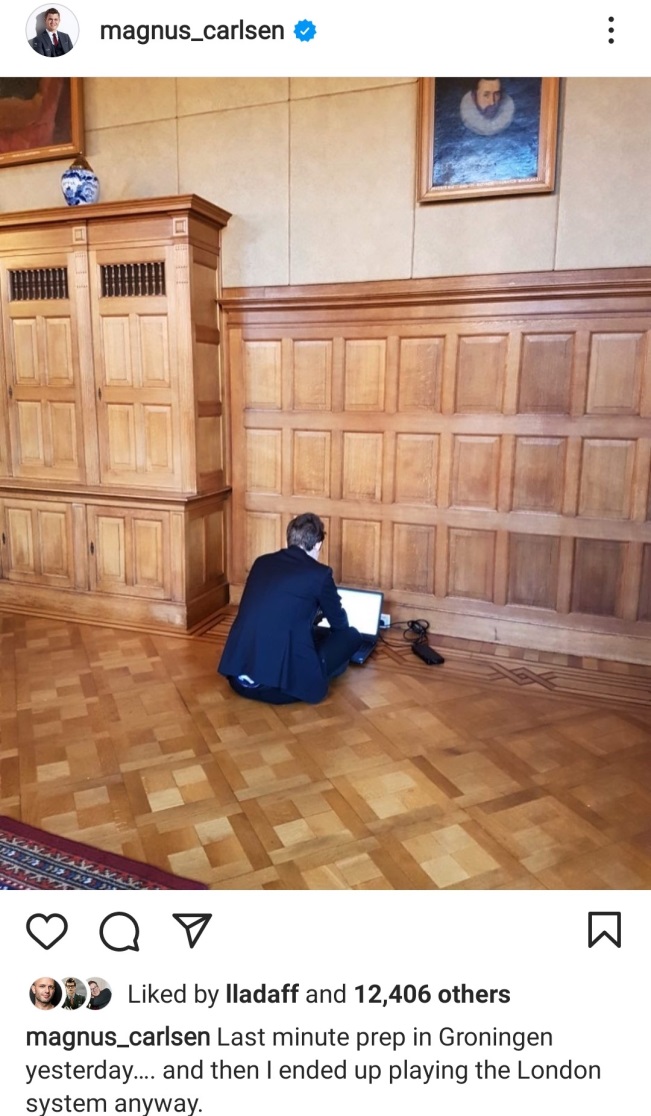 It is actually quite common among chess players: many people spend the morning before the game trying to prepare the main lines, but dislike it all and eventually choose to play the London System.

2.  London System can be played against everything

Another major advantage of the London System is that it can be played against any Black’s meaningful setup. White, of course, can be more creative and choose different ways, but the setup itself is universal enough.

Black can play something in the style of the Queen’s Gambit Declined, the Queen’s Indian, the Grunfeld, the King’s Indian Defense, or something else. Against all of these openings, White can develop the bishop to f4, build the pawn triangle in the center, and look ahead confidently.

On the diagram below, you can see White’s main setup: 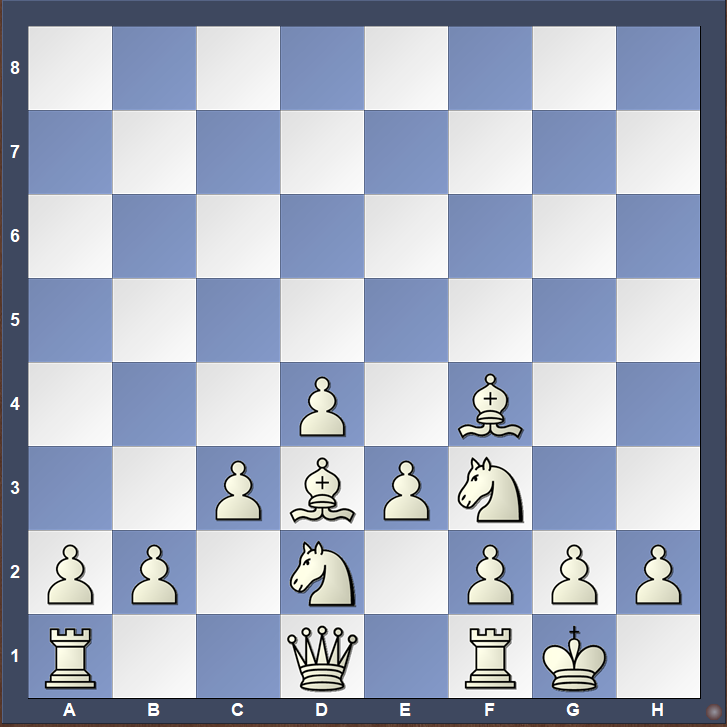 Notice that White doesn’t have any problematic pieces and the position is quite solid. Sometimes also the move h3 is included to create a retreat square for the dark-squared bishop.

3.  London System is easy to play

Perhaps, the London System is the easiest opening to play. It is easy to remember where each piece should be placed; the following plans are simple too. White’s position is rock-solid but still, venomous. There are not many dangerous ideas that Black can employ against London.

Usually, White enjoys at least a slight advantage thanks to more harmoniously placed pieces and clear plans. No wonder such a way of playing is so popular!

4.  London System is safe and solid

In the London System, White builds a solid pawn formation, develops all of their pieces to natural positions, and keeps the king in a safe place.

All of that shows how hard it will be for Black to find a way to seize the initiative. It makes this opening a good choice against aggressive and tactical players. Also, you can play it if you don’t feel comfortable in sharp positions and would like to avoid complications.

5.  London System is unpleasant for Black to face

Many players hate meeting the London System as Black. That is logical: they want to beat you with their sharp counterattacking openings, but instead, have to suffer against the seemingly boring setup.

Many of them get frustrated once they see the bishop appearing on f4. They think it is a drawish opening and spread memes and jokes about it all over the internet. But if you play the London System with the knowledge of the main plans, it becomes quite a dangerous weapon. Those players would have to work hard to get that draw!

Looking for more on this opening? Here are 5 more reasons to play London.

Many people think the London System is a boring positional opening, but actually White has a lot of aggressive ideas. The main plan is to plant a knight on e5 and develop an attack against Black’s king. 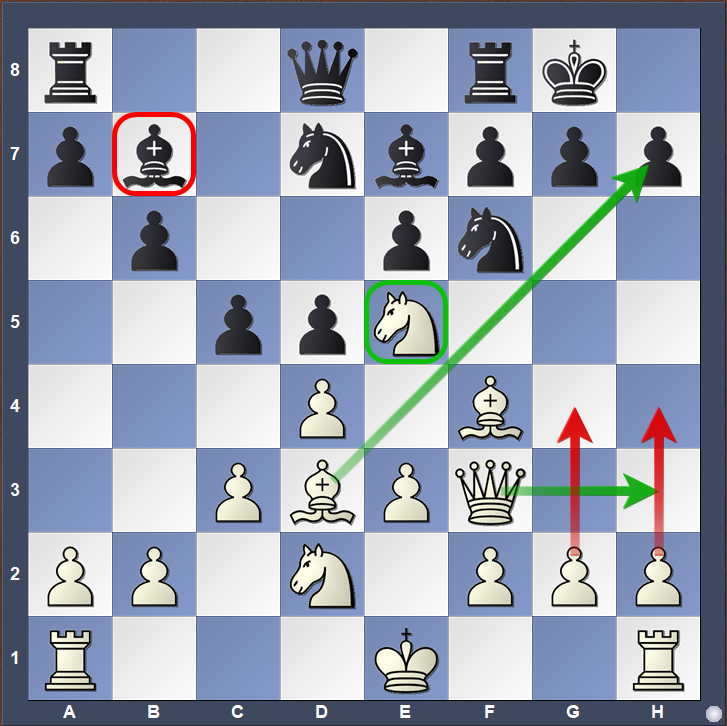 Note that White’s light-squared bishop is active and perfectly placed, whereas Black’s one is quite a poor piece stuck behind the pawn chain.

7.  This opening offers a lot of variety

There is a common thought that in the London System, you develop the pieces to the same squares in every game on autopilot and have no variety. Many people play like that indeed.

But actually, there are many nuances and move-order tricks available for both sides. Experienced players can alter their play and opt for different plans against almost any setup Black can choose. Moreover, modern grandmasters keep coming up with new ideas and fresh findings.

8.  London is the choice of top players

The London System has gained a lot of popularity in recent years only. Before that, among the top players, it was played frequently only by Gata Kamsky. Earlier, the main London hero was the Croatian and Yugoslavian grandmaster Vlatko Kovacevic. Nowadays it is hard to find a strong grandmaster that has never played the London System. It is mostly thanks to the current world champion Magnus Carlsen that this opening has become trendy. In his hands, this harmless-looking variation turned into a dangerous weapon, and, of course, many other people started trying it too. It includes such strong players as Levon Aronian, Alexander Grischuk, Sergey Karjakin, Hikaru Nakamura, Vladislav Artemiev, Le Quang Liem, and many others.

9.  You will learn typical pawn structures with London System

Before choosing what to play, it makes sense to see what openings lead to similar pawn structures and positions. If you choose such openings, you will reach positions with familiar plans more often. The pawn formations arising in the London System are also common for the Caro-Kann and the Slav Defenses.

The experience of playing one of these openings will transform into a better understanding of the others. There are also some other Queen’s Pawn Games such as the Trompowsky or the Torre Attack that are close by their nature to the London System.

Want to learn more about the London System? Make sure to read more on this opening.

10.  London System is good at any level

Since the London System is so easy to play and learn, it often is recommended to beginners. They can learn how to develop the pieces towards the center, get a safe position out of the opening and just play. It also works great at the club level because it is unpleasant to meet as Black and White still don’t need to memorize much. Regarding the masters or even the best players in the world, it often seems they play complicated and sophisticated openings only.

But often it is good to keep things simple and avoid mainstream theory for them as well.

The London System is a great choice in that case. Although let’s point out that the top players already know a lot of different openings and pawn structures. If someone plays only the London System all their life long, it will be hard to improve. It is a great opening and it can bring a lot of success, but for future progress, it is important not to get addicted to it and learn how to handle different kinds of positions.