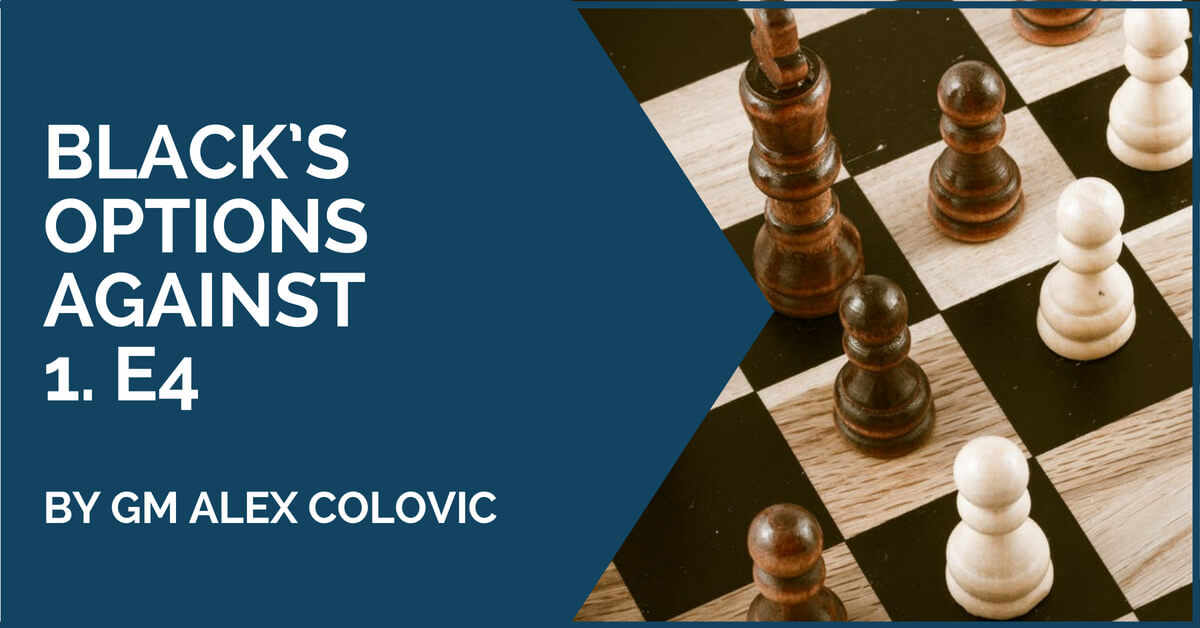 As we noted in Part I of our analysis, White generally manages to steer the game towards his preferred lines after most of Black’s defenses against 1 e4. Our task here is to see which of those are the most acceptable for Black from the aspect of practicality.

The Caro-Kann (1 e4 c6) is relatively popular nowadays, but so are White’s options against it. It can be said that all these three are main lines today – the Advance Variation (3 e5), the Exchange Variation (3 ed cd and now 4 Bd3 in particular), and the traditional mainline after 3 Nc3/Nd2.

This makes it very impractical for the Black player as he needs to focus his attention on 3 main lines, which is a bit too much!

The Sicilian is an even more popular choice, but that too comes with a price. Magnus Carlsen taught us that the so-called sidelines are not as innocuous as it was thought for so many years before him. The Rossolimo (3 Bb5), for example, is no less topical than the main lines.

Since the Sicilian is such a popular opening, let’s dive into it a bit deeper, in order to find out which of the main lines is the most practical. This, of course, means that the Black player must carefully prepare all the “sidelines” that White can choose on the way to his preferred Open Sicilian.

After 2…Nc6 on the other hand, the only “real” alternative to 3 d4 is the Rossolimo, and even though there is a lot of theory there, Black should be able to find a line that suits his taste. In the Open Sicilian after 3 d4 cd 4 Nd4 Black has one very practical choice – the line with 4…Qb6, which after 5 Nb3 leads to typical Sicilian positions after both sides finish development. This is practical for Black since it will guarantee him a typical Sicilian position as early as move 4 and without the need to study so many deviations.

To sum up, the Sicilian is only for the devoted students who are not afraid of putting in the additional effort to deal with the many deviations on the way to the main lines.

Experts definitely do not recommend The Pirc if we’re looking at it from a practical perspective. As explained in Part I, White simply has way too many good options against it.

The Scandinavian (or The Centre Counter as people also call it) is a practical choice. After 1 e4 d5 2 ed Black already has a choice of which line to play, 2…Qd5 or 2…Nf6. I’d be more inclined to recommend the former since after it White has only two possible plans – to play 3 Nc3 or to play 3 Nf3 and then strive to push both d4 and c4.

The practicality of the Scandinavian lies in the fact that both Black can use the same (or very similar) development – the queen can return to d8 (this is the most practical choice compared to …Qa5 or …Qd6) and then the set-up is Nf6, Bf5 or Bg4, c6, e6, Nbd7, and Be7.

This will guarantee a solid position without weaknesses. If you like such positions and you’re comfortable in them, then this is the best choice for you!

The French is similar to the Caro-Kann in the sense that all the lines against it are main lines. The main lines after both 1 e4 e6 2 d4 d5 3 Nc3 or 3 Nd2, the Advance Variation (3 e5), even the latest trends 3 Bd3 and 3 ed are not to be underestimated. In short, not practical.

Together with the Sicilian, the move 1…e5 is among the most popular nowadays. All the elite players play it, mostly relying on the solidity of the Berlin endgame. Going for the Spanish (or the Ruy Lopez, as it is also known) is not practical – White has many options on the way to it plus the Scotch and the Italian, with their huge bodies of theory, are extremely popular nowadays.

However, the Petroff Defence (1 e4 e5 2 Nf3 Nf6) can be a good practical choice. The positive side of the Petroff is that it arises as early as move 2. So, if White doesn’t want to enter it he can only deviate on move 2. The Bishop’s Opening (2 Bc4) is the only “real” attempt (the various gambits and the other options are easily dealt with) but here Black has the very solid line 2…Nf6 3 d3 c6.

In the Petroff, White has two main moves, 3 d4, and 3 Ne5. Caruana’s latest successes after 3 d4 Ne4 showed that Black is doing great there, while after 3 Ne5 d6 4 Nf3 Ne4 we come to the last crossroad – White can choose between 4 d4 and 4 Nc3. Theoretically speaking Black is doing well after both, but good theoretical work is still required.

The Alekhine Defence (1 e4 Nf6) doesn’t have the same reputation as it once had (it was played by Fischer in his World Championship match against Spassky in 1972!) but it can be an interesting option. White does have a wide choice of lines against it, though the only real attempts for an advantage are the main lines: 2 e5 Nd5 3 d4 d6 4 Nf3 or 4 c4.

The good thing going for Black here is that after both he can choose his line. In line 4 c4 Nb6 5 ed (the Four Pawns Attack  5 f4 isn’t that scary anymore) theory recommends 5…ed (instead of 5…cd in view of line 6 Nc3 g6 7 Be3 Bg7 8 Rc1 where Black is experiencing difficulties). In the line with 4 Nf3 lately Black has played 4…de 5 Ne5 c6, obtaining solid if passive, positions after getting the bishop to f5 and playing e6. Another fresh idea after 4 Nf3 can be 4…Nc6, recently tested by Nakamura in a blitz game.

We have reached the end of our analysis of the openings from the point of view of practicality. I now hope you have ample information to decide for yourselves what best suits your needs and tastes. Good luck!