The 3…Qa5 Scandinavian: Play it Safely and Aggressively 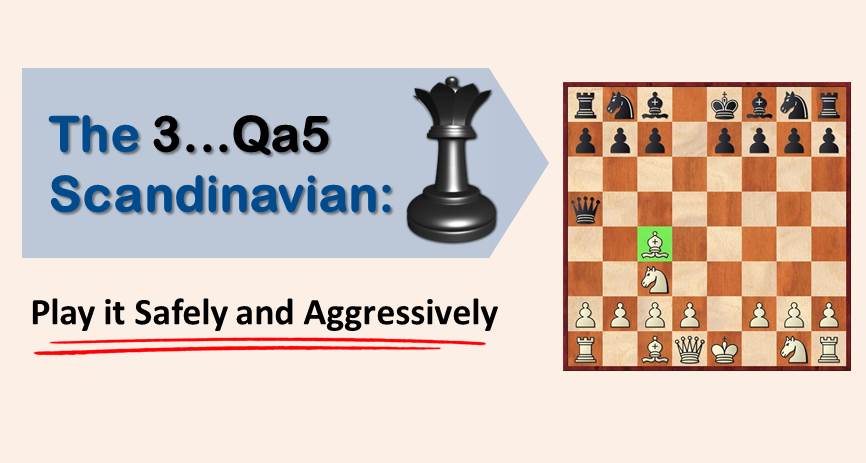 Scandinavian has always been an awkward defense to meet for every 1.e4 player. Not because it is especially dangerous for white, but because the mainlines in which white is meant to obtain a theoretical advantage are quite complicated and difficult to remember. Being a defense seldom seen in practice, it makes it even more difficult to try the current theory.

In this article, we are going to look into a practical solution to this problem that has worked very well in tournament games: the system with 4.Bc4!?

White’s idea is to develop easily with 5.d3 followed by 6.Bd2. There are several interesting elements that have made this system appealing enough to be played by strong Grandmasters, among which the most notable one is Nigel Short. However, the line was already popular a long time ago and we can find games played by the Cuban World Champion Jose Raul Capablanca. I suggest the reader search for his games in order to see the beginnings of this variation.

But let’s see what the main particularities of this system with white are:

There isn’t much theory established on this line. From my own experience in tournament practice, I can say that after 4.Bc4 the game is pretty much open and both players are on their own. White can try the same idea with several move orders. Meanwhile, black’s usual plan which is based on Nf6-c6-Bf5 does not look like the best option. Some players have decided to play with e6, keeping the bishop on c8. This treatment is far from perfect since white can still go d3-d4 and get into a sort of Rubinstein variation (French with 3…dxe4) with advantage.

Scandinavian – In the following examples we explain the main ideas for white:

Black applies the standard development with Bf5,c6, and Nf6. This allows white to expand on the kingside with h3-g4-f4. There are ideas with f4-5 and the black bishop on g6 is awkward.

Black plays with e6 keeping the bishop on c8. Even though this game turned out great for black, this approach cannot be recommended. White obtains an easy advantage by continuing his development and he can even castle queenside as in the following game.

White plays f4. This is an interesting idea. By playing f2-f4 early in the game white obtains some space on the kingside. The Brasilian GM Gilberto Milos, also a big expert on this variation has tried it successfully against the English GM Stuart Conquest.

In conclusion, we hope to have provided a practical weapon against the Scandinavian, easy to learn and dangerous enough to put difficult problems for your opponents. Good luck with it!

Want to know more about the Scandinavian? Look at The Complete Guide.

We also recommend reviewing Fried Liver Attack: The Complete Guide as well as Playing Against The Trompowsky: A Standard Response.