The standard side of the No Logo Norway 2014 chess tournament started on June 3 2014. The tournament features some of the top players in the world led by hometown hero and world champion Magnus Carlsen.

American born Italy loving Fabiano Caruana was the first to draw blood in the first round beating Alexander Grischuk. Grischuk’s tenth move was a deviation from the previous games he has played in the position reached. He played Bf4 three times and Nf2 once. Grischuk blundered badly on the 38th move and the game ended quickly after that. The rest of the games in round one all ended in draws.

Round 2 saw Caruana win again this time against Svidler. Aronian bested Karjakin and Grischuk rebounded from his round one loss to defeat Topolov. The featured matchup of Kramnik and Carlsen ended in a 60 move draw. Giri and Agdestein also drew. The end of the round saw Caruana a half point up on Aronian and a full point on the rest of the field. 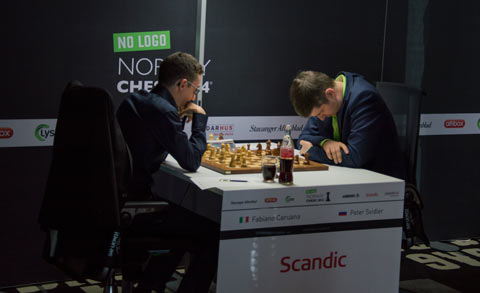 Caruana and Carlsen battled to a 67 move draw in round 3. Grischuk had his second straight win in the tournament this time over Aronian. This put Grischuk a half point behind leader Caruana. Kramnik defeated Giri in the round. Svidler and Topolov drew in the round. 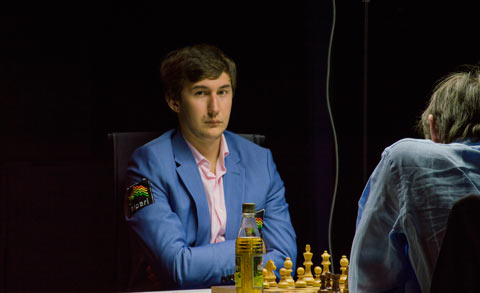 Karjakin broke Grischuk’s winning ways in round 4 defeating him with the white pieces. The game mirrored the game between Moussa and Kaufmann from 2010 for the first 15 moves. Black played Bh6 for move 16 in that game while Grischuk played Bxd4 instead. Unfortunately for him Bh6 was the better choice and Kaufmann’s fate 4 years before was the better result with the win for black. This move was not the decisive move in the position as black had the advantage for many moves after this until he slowly lost the advantage he had gained and ended up being completely dominated in a Rook and minor piece (white) vs. two rooks (black) endgame. All other games in round 4 ended in draws. The round ended with Caruana still in first with 3 followed by Kramnik with 2.5. Carlsen, Karjakin, Aronian and Grischuk all still in the hunt with 2 points.

The tournament started to get interesting in round 5 as Kramnik defeated front runner Caruana and Carlsen defeated Aronian. 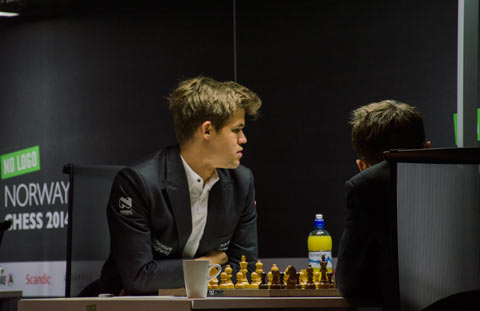 In Carlsen’s game Magnus deviated from the main line with fxg3 on move 11 instead of the usual move hxg3. Magnus went on to suck the life out of any play Aronian could have and have an absolutely winning endgame which Aronian played out for another twenty or so moves after it was obvious he lost. Kramnik was able to create a more active king in the endgame during his game to win in the end. Giri defeated Topolov to move within striking distance of the front runner Kramnik.

The rest of the games in the round all ended in draws.Kramnik with 3.5 points has captured the lead in the tournament with the win and leads both Carlsen and Caruana by a narrow half point margin. Carlsen and Kramnik are the only unbeaten players in the tournament. Giri, Grischuk, Agdestein, Karjakin are all a full point back with 2.5 points. Karjakin has the ability to make up ground on the players above him as he still has games upcoming against Carlsen, Caruana, Kramnik and Giri.