How to Improve at Chess for Adult Players? [a secret revealed] 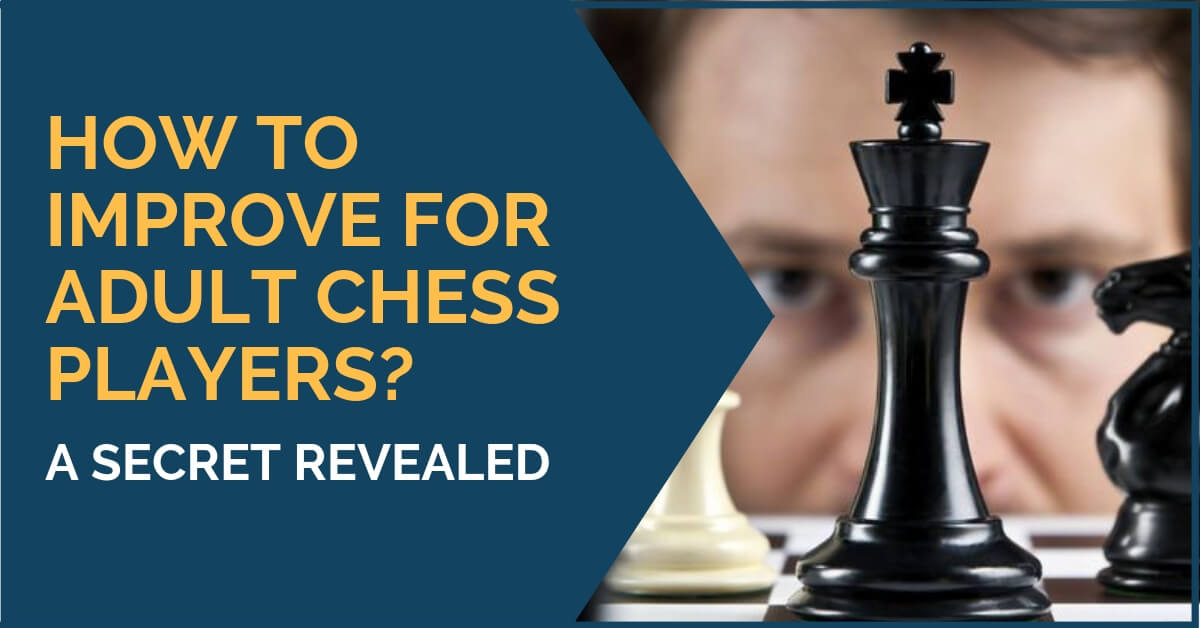 Chess for Adult Players: How frustrating is to observe kids make leaps and bounds with seemingly no work while we adults work so hard and yet we barely make progress! While it is true that sooner or later everybody reaches a plateau, I think there are other, hidden factors at work when it comes to chess improvement as adults.

I would like to describe my personal experience with this problem. As a teenager, I quickly rose and in my early 20s, I was already an IM. But then I got stuck at the same level for way too long.

I was putting in an insane amount of work as years passed by and I understood chess better as time passed. My knowledge of openings, middlegames, and endgames increased, but my ability and results remained more or less the same. Something was wrong.

After very deep introspection I came to a very surprising insight. I won’t talk here about the everyday work I did on improving my calculational abilities. That type of work goes without saying.

Chess for Adult Players: I discovered a very important thing.

What I learned was the importance of comfort.

The usual advice is to “get out of our comfort zone” but this is different. On my path I was influenced by many factors all the time – whether they were my idols, the great champions of past and present, my friends, a certain playing style, or perhaps a book. While all these influences enriched and improved my understanding of the game, they also led to the loss of contact with my own taste and preferences.

I was playing in a certain style and I was getting certain positions that weren’t exactly to my liking and the problem lay in the fact that I wasn’t aware of that. I always had some lingering feeling that something was wrong, but I couldn’t really pinpoint what it was. The above-mentioned deep introspection led me to discover the core of the problem – I wasn’t comfortable over the board with the positions I was getting and with the way I was playing.

This was truly an eye-opener.

I was free to change my repertoire, to play what was suited to my true nature. This freedom gave me more confidence to trust my intuition, especially in situations when I couldn’t “confirm” it by calculation.

I will give an example of a “misguided” choice based on what “should” be played.

The Grunfeld Defence has always been a very popular and very good opening. It has also been played by my idols, Fischer and Kasparov. So I thought that I should play it too.

After spending some time studying it I started to play it. While it didn’t help that the period when I played the Grunfeld coincided with a difficult period due to some personal problems outside of chess, my results with the opening weren’t that great. I just felt uncomfortable with the positions I was getting (though theoretically, I was always OK after the opening) but I wasn’t aware of that. Most of the time I blamed bad form for my losses.

While I am still in love with the opening, and probably if I started playing it again I would play it much better than before, my realization first led me to understand that I wasn’t comfortable in those positions and then to a better understanding of where I feel more comfortable.

I understood that I feel more comfortable with a stable center, rather than the fluid one in the Grunfeld. There is no surprise then why in spite of my excellent preparation my results in the Grunfeld were mediocre. Upon switching to the Slav and the QGD my results improved.

The concept of comfort doesn’t concern the openings only.

It also concerns the manner in which you play. If your true nature inclines you toward calmer play, don’t feel forced to play like Tal just because he’s your idol. You may like to play that way, but it will never work and you’ll suffer.

Do what works best for you, and find your own way.

After discovering my “comfort zone” (here with a positive connotation!) I started enjoying chess more. I was doing the thing I like in a way I liked doing it. Enjoying chess is one of the primary prerequisites for improvement. And it’s impossible to enjoy an activity if you feel uncomfortable doing it.

When you sit at the board and you want to be there, you are looking forward to the game and the way in which you will express yourself in that game. In such a state of mind, it is very likely that you will play if not the best, then at least very close to what your best chess is at that point.

When you approach every game you play with that attitude you will be capable to show what you know. Otherwise, all the accumulated knowledge over the years goes to waste.

Chess for Adult Players: And then, finally, you can improve.

You will play with the inner peace that comes after finding your true self. And, in that state, everything you have learned will start coming to the surface. Playing chess will feel wonderful again.

We also recommend reviewing these articles: