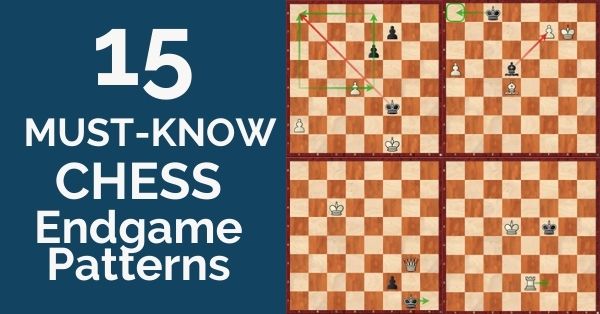 Endgame Patterns, some of the most important ones, are going to be presented in this article.

These are endgames that tend to occur quite often or typical ideas that you should be aware of in this final part of your game.

With today’s technological advances, everything is easier to access.

It is easier to find information online and there are lots of websites, videos, and courses to learn chess from. However, this huge amount of material can also be more confusing for a club player who is trying to improve their level. The chess game is comprised of three parts, but it seems that the opening phase is lately stealing the show.

Chess aficionados are getting distracted by the big amount of openings and interesting ideas available, jumping from one opening to another and forgetting most of the time about the other two.

Having a decent knowledge about the opening theory and knowing how to place your pieces is of course necessary, but you can usually decide the game in the middlegame and endgame.

1. Mating with the Queen

First and foremost, any chess player should know very well how to deliver checkmate with only the King and Queen. Once you understand it, the technique is very simple. The ideas to remember are:

In order to deliver checkmate, you have to force the opponent’s king towards one of the edges of the board

You do NOT do this by giving checks!

Checks won’t get you anywhere in this endgame, as the rival king shouldn’t go by itself towards the edge; it should stay in the center. In order to achieve this, you will have to restrict the king’s moves more and more until it will have to go to the edge.

Avoid stalemate! One common mistake is to stalemate the opponent’s king in one of the corners. Remember, you want to leave the king at least one square available to step on! 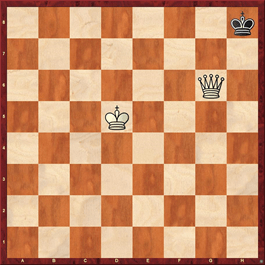 Example of a stalemate with the Queen

The last step is to bring the king over and deliver checkmate.

2. Checkmating with the Rook

The ideas are similar to the ones presented above – you must bring the opponent’s king to one of the edges of the board and this is, again, not achieved by giving chaotic checks. It might take a little longer to force this with the rook, but you will patiently get there.

You will need the help of the king to achieve this. The first step is to cut the opponent’s king with the rook. Then, you will want to bring the king over, until the two kings are facing each other. Then, the rook can move away to give a check, when the rival king will be forced to step one file/ rank closer to the edge. For example: 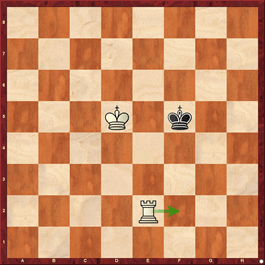 This is the position you want to achieve; by playing Rf2 the black king will have to go to the g file. Then the white king comes over and tries to achieve the same pattern again until the black king reaches the h file and will get mated.

The stalemate pattern with the Bishop’s pawn. Generally, the Queen will win against the pawn. If the pawn is about to promote, the winning technique is to give checks until the king is forced to go in front of the pawn.

Then, you will have time to bring the King one step closer to the pawn and so on until the pawn is captured.

There are only two situations when this might not work so well – when the opponent has the Bishop’s or the Rook’s pawn. Let’s see why: 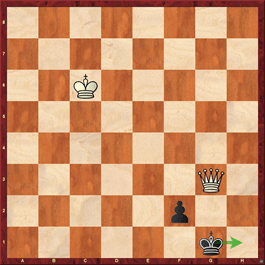 This is when, if the pawn was on any other file, the black King would be forced to go in front of it, otherwise the pawn would be captured. Here, however, the drawing move is …Kh1! And now, if the Queen captures the pawn, you will recognize the stalemate pattern above.

The stalemate pattern with the Rook’s pawn. With the h pawns, things are relatively simpler: 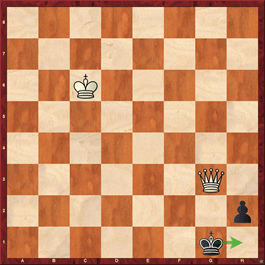 Here, the King will go in front of the pawn, but the problem is that the white King can’t come any closer. If it does, black is again stalemated!

Checkmating patterns. Most endgames with the Bishop’s and Rook’s pawns are drawn. But, there is one winning idea when the king is closer to the pawn.

The pawn can be allowed to promote, but checkmate will be unavoidable. There is more than one pattern, but this is one of them: 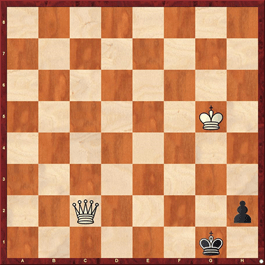 If white gets this position, he can win with 1.Kg4!! Black can promote here, but it won’t help: 1…h1Q 2.Kg3! and black can’t avoid getting mated.

The way to fight for a draw against a passed pawn is to keep the king in front of it. If the opponent can’t reach one of the winning positions, the game will be a draw and will most likely end with the following stalemate position: 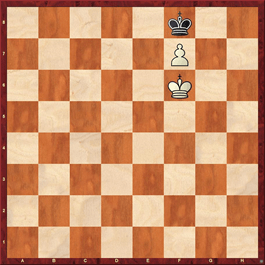 Here, with black to play, the game is drawn.

7. King on the 6th rank in pawn endgames

Pawn endgames are simple but tricky. They need to be studied carefully and played with patience, as any mistake can cost you the win. One important idea to remember is that the King on the 6th rank, in front of the pawn, will win. For example: 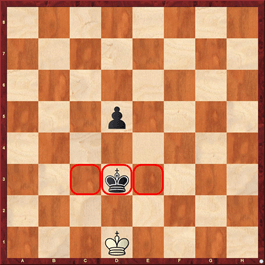 Here, if the black king makes it to the highlighted squares, the endgame is won, no matter whose turn it is to play. 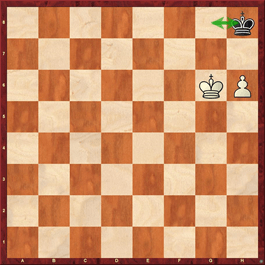 Here black will only play Kg8-h8 until white decides to push h7, when the black king will get stalemated.

Blocking the king’s path to the pawn. One very important rule in pawn endgames is the square of the pawn. This will tell us whether the pawn can promote by itself or it will need the help of the king to advance. When the opponent’s king is right in the corner of the square, it will need the diagonal free in order to catch the pawn. And this is where we can find the following pattern: 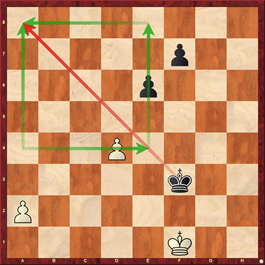 The winning move is 1.d5! Now the black king will have to go around his own pawn, causing him to waste a tempo and get outside of the pawn’s square.

The Bridge (Lucena’s position). This is one of the most important patterns in rook endgames. If your pawn has reached the 7th rank with your king in front of it, you need to know how to promote it. You can do this by creating a “bridge” with your own rook, under which the King will be safe from checks: 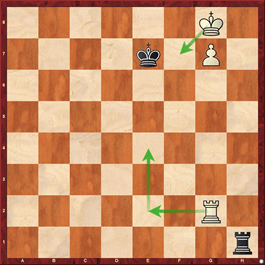 Philidor’s position. This is one of the most important defensive methods in order to keep the opponent’s pawn from promoting: 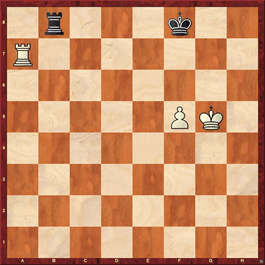 1…Rb6! The idea is to wait for the f pawn to advance to the 6th rank when the rook will go to the 1st rank and start giving checks from behind.

The Skewer pattern. With a pawn close to promoting and the rook in front of it, the following idea is very common: 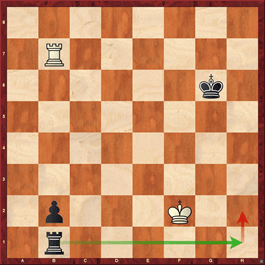 Here, with black to play, the winning move is 1…Rh1! The point is that now, after 2.Rxb2, black will play 2…Rh2, winning the rook. This is the reason why white should keep the king on g2 and h2 in order to make a draw in this position.

13. Two connected passed pawns on the 3rd/6th rank will defeat the rook

Apart from some very few cases, the rook alone can’t do anything to stop two connected passed pawns from promoting. This allows tactical ideas such as this one: 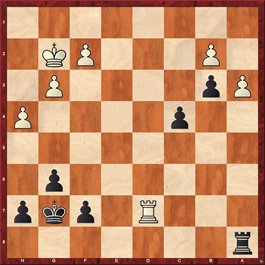 In this position, black can win a pawn after 1…Rxa3! The idea is that 2.bxa3 loses on the spot to 2…c3 and white can’t stop the pawns anymore.

In minor pieces endgames, one common idea to make a draw is to sacrifice the piece for a passed pawn and leave the opponent with the Rook’s pawn and a bishop of the wrong color. You can win this endgame only if the bishop is of the same color as the corner. For example: 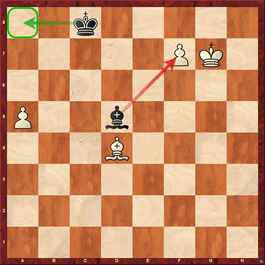 Here, white is threatening to promote the f pawn. So, black can make a draw with 1…Bxf7! Even though white will have an extra bishop, there is no way to get the black king out of the a8 square. To do so, white would’ve needed a dark-squared bishop instead.

15. Endgame Patterns: The knight that can’t stop the Rook’s pawn

When attacked on the 3rd/6th rank by the Rook’s pawn, the knight can’t stop it anymore. This is an important pattern that can lead to beautiful tactics in the endgame. For example: 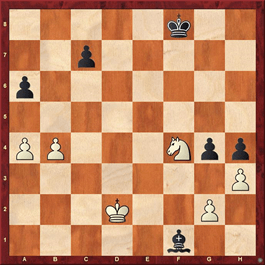 Black to play and win

Here black can achieve the win with 1…Bxg2! The point is that 2.Nxg2 comes 2…gxh3 and the pawn will promote.