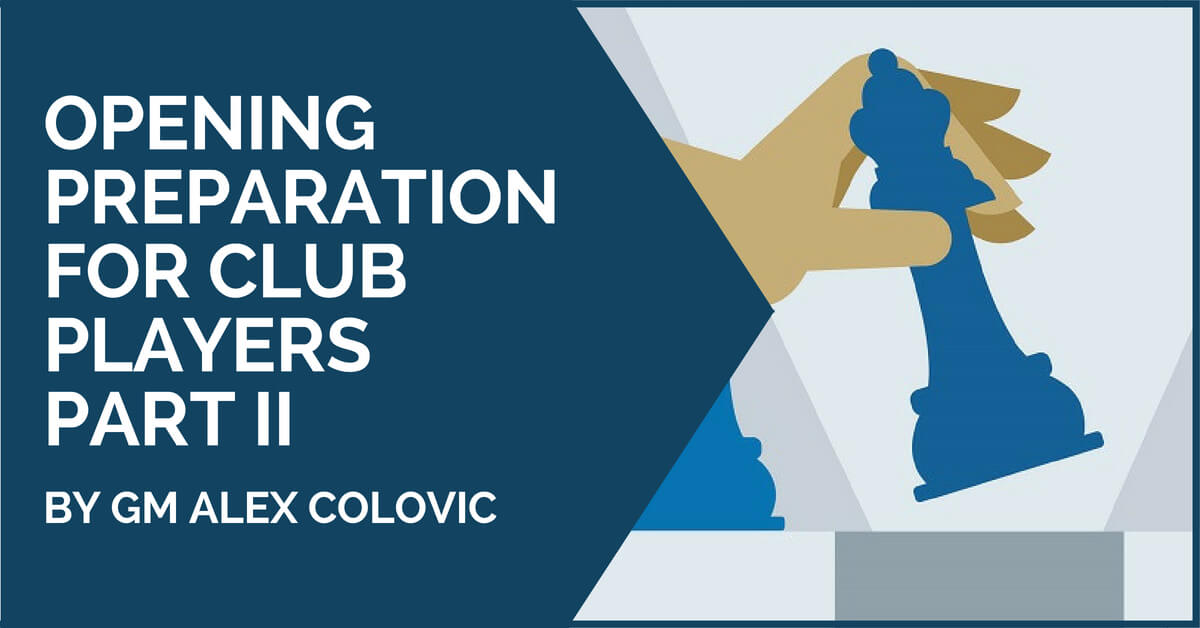 Opening Preparation: In Part I, we saw what White has at his disposal on move 1. Here we will take a look at what Black can do when faced with each of White’s main moves (except for 1.e4, which will be dealt with in Part III).

White’s 1.b3 was deemed impractical in our analysis in Part I and rightly so. Black has a wide array of choices here and can pick up any line that is to his liking.

Many people say that preparation is the key to the success.

The above examples show one of the main problems of opening preparation and that is the problem of transpositions. When constructing a repertoire and preparing an opening it is vital to note and be careful of all the possible transpositions, making sure they do not lead you out of your prepared lines.

However, if against the English Black doesn’t want to be dependent on his preferred opening against 1.d4, then he has the universal answer 1…e5.

How practical is this?

By far the more popular is the fianchetto of the Bf1, while the other option is to play e3 (either after d3 or leaving the pawn on d2). What is important for Black is that after either option it will be him who will choose the opening set-up.

Against 1. d4 Black has a choice of many openings.

Let’s take a look at the most important ones.

The Slav is a very solid option for Black. However, from a practical perspective, only the Chebanenko Slav (where Black plays …a6 against all White’s alternatives) is worthy of consideration.

Opening Preparation: The Queen’s Gambit is another solid option.

But of the two, Accepted (QGA) and Declined (QGD), the Accepted is the more practical one. The reason is that against the QGA White has three attempts, 3.e3, 3.e4, and 3.Nf3, and against each Black has a choice of lines. However, if he decides to enter the main lines after

The Queen’s Gambit Declined has a centuries-long solid reputation, it is the opening for World Championship matches (as Kasparov called it). Looking at it from a practical perspective it looks somewhat inferior compared to the QGA. First there is the Catalan (1.d4 d5 2.c4 e6 3.Nf3 Nf6 4.g3) which is very popular nowadays. Luckily here it is Black who chooses his option, so that can be dealt with.

And finally, there are the sidelines where White plays e3 at some point, but here again Black can choose his preferred option. As you can see, in the QGD White has more options to choose from, but against all, it is Black who in turn chooses his preferred defense. To conclude, the QGD is not a bad practical choice.

Moving towards the Black fianchetto, the Grunfeld (1.d4 Nf6 2.c4 g6 3.Nc3 d5) nowadays is considered to offer the best of both worlds to Black – it is theoretically in excellent shape and is also very dynamic and offers good counter-attacking chances. The price to pay for such an ideal opening? It is by far the most impractical of all! White has the widest array of options against the Grunfeld, to name but a few: the Russian System (4.Nf3 Bg7 5.Qb3), the Exchange Variation (4.cd Nd5 5.e4 Nc3 6.bc c5 and here White has another choice among 7.Bc4,

The King’s Indian is similarly impractical (White has a big choice of lines against it) and theoretically speaking it is also inferior to the Grunfeld. The play is initially less dynamic than in the Grunfeld and Black is struggling in several lines, such as the popular Makagonov line (1.d4 Nf6 2.c4 g6 3.Nc3 Bg7 4.e4 d6 5.Nf3 0-0 6.h3) and the Mar del Plata lines where with the help of engines the White players discover new ways to defend their kingside.

Black’s choice after 1.Nf3 depends on his preferred opening after 1.d4 (or even 1 e4 – for example if he plays the Sicilian he can reply 1…c5, not fearing a transposition after 2.e4). Unlike 1.c4, Black doesn’t have an independent option here, so he must choose his moves here carefully in order not to be “move-ordered” into something he hasn’t studied after 1.d4. Since 1.Nf3 is largely a transpositional option (except for the King’s Indian Attack, against which Black can choose one of the many good options), Black is only well-advised to study them carefully as sooner or later he will end up in his defense against 1.d4.

In Part III we will look at Black’s opening choices after 1.e4.

Need to learn how to improve my game and maybe you will help me, although I have not enough money to invest in your paid offerings!

Seems like the QGA is proposed as the best practical option. Yet I believe it is widely considered as an opening that offers very little counter-chances to Black. If you play the QGA, it seems that White has all the fun most of the time. So there is a cost to the practicality.