The Scotch: A solid and reliable variation against 1…e5 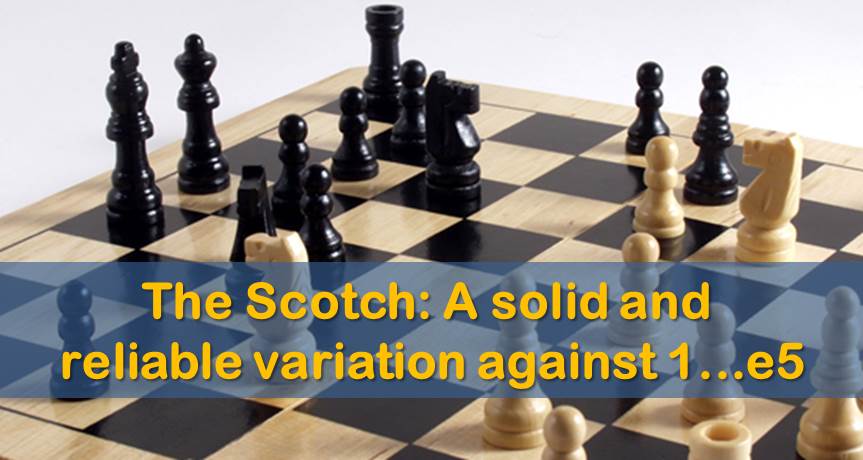 The Scotch: Opening theory is like clothes fashion. People play whatever is played the most, what the leading experts play whether they have an original feeling for it or not, like following the latest trend dictated by a fashion supermodel.

There is nothing wrong with this, it’s nothing new either. However, sometimes we forget that there is life outside the mainstream openings without going into the darkness of dubious choices.

The Ruy Lopez has won the status of mainline against 1…e5 and this is something that doesn’t look like it’s going to change, but it’s not the only decent choice for white. In this article, we are going to draw your attention to the Scotch Variation as a solid and reliable alternative against 1…e5. Our intention is not to promise you any opening advantage; we don’t believe that’s possible with any opening.

However, more than just a few Grand Masters have lately found that the play is very lively and there are real possibilities of outplaying your opponent. We must add that if this comes as a surprise weapon it is even more effective.

The reputation of this variation has always been that black equalizes effortlessly. While there is some truth in this, the question is “So what”? That is exactly where the game begins. There are a few positive points to consider taking the Scotch seriously:

Although the elite players don’t employ the Scotch in classical games, it was seen a lot during the last World Rapid Championship in Berlin – Svidler, Karjakin, Morozevich, Kryvoruchko, and many others. At 2600 level we can find several adepts of this opening, such as GMs Kravtsiv, Jones, and Hovhannisyan, just to name a few.

Let’s have a look now at some recent games by strong players who used the Scotch:

Example 1: This is a very nice game played by one of the leading experts in this variation as white against the strong GM Sergey Zhigalko. We can see here the typical middlegame plan of trading the dark-squared bishops followed by Ne2-f4. This is a common idea in this variation.

Example 2: Sometimes black refrains from playing with d7-d5. Here the game is a bit less forced and both sides have plenty of possibilities. In the game, Jones-Erdos white developed a strong initiative and went on to win.

Example 3: This is one of the top games in this variation and one that showed that things were not so easy for black in this line. This was true even for the former world champion Vishy Anand who couldn’t fully equalize as black and lost against Wang Hao in Wijk Ann Zee 2013.

We hope we have drawn your interest in this little variation and you will give it a try in your tournament games. As you can see, the positions are quite interesting and there are many ideas yet to be found.