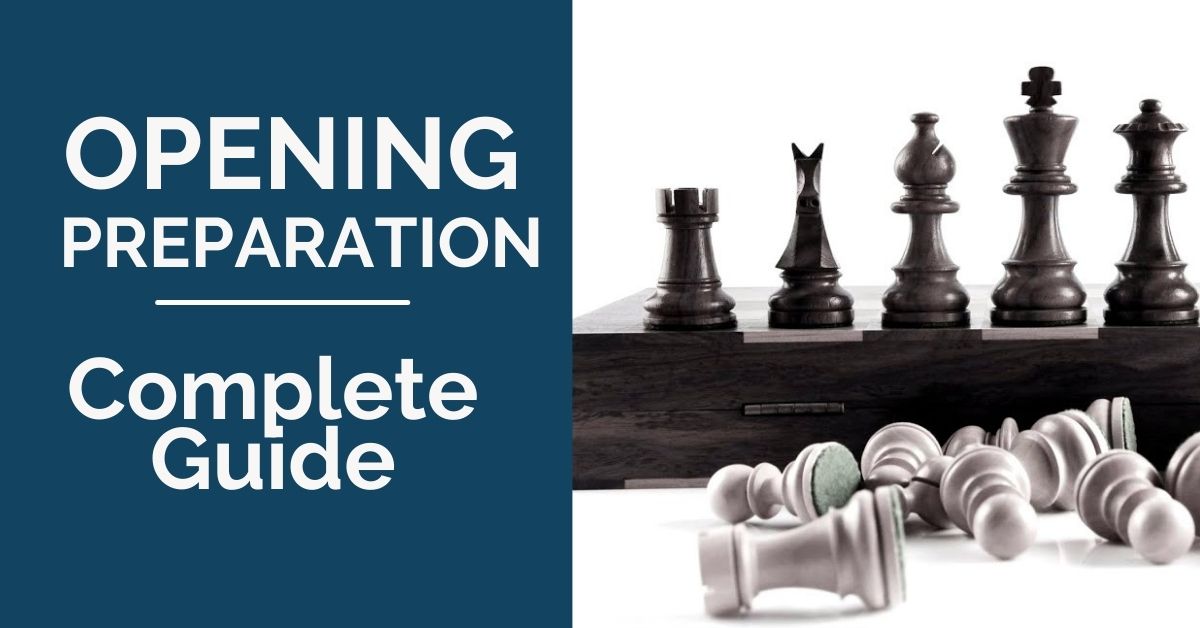 Want to master an opening preparation? Probably every chess player at some point starts wondering how the champions of different generations would play against each other if time-traveling existed. Would Jose Raul Capablanca or Alexander Alekhine be able to beat the current top players? What about Robert Fischer? People also wonder how a modern grandmaster would stand against Paul Morphy or Wilhelm Steinitz. All these hypothetical situations usually come down to discussing one of the most important changes that chess has ever experienced. Modern players have got an indisputable advantage – they prepare with chess engines!

With the help of computers, many endgame positions got clear assessments. Also, people found a lot of new attacking and defensive ideas.

Nevertheless, the most affected area is the openings.

The engines advanced and changed the opening theory dramatically. Many club players nowadays know about this part of the game more than some of the world’s best players of the past! Everyone prepares with computers, and it has become extremely hard to play without much knowledge of theory.

Players with good opening preparation emerge from the first phase of the game with great positions, more time on the clock, and a lot of saved energy. It gives a tremendous advantage and explains why so many players spend so much time studying openings. But how should you do it?

Every chess player should have an opening repertoire. Basically, it is a set of replies against anything your opponent can play. The repertoire should match your level.

You do not need a grandmaster level of opening preparation if you’re a club player.

There are many downsides to that: it will be hard to memorize all the lines; some of them can be too difficult to play over the board; many of them you will never face at your level. You can broaden and deepen your repertoire with time, but initially, it is enough to cover the main options only.

You can check a database, see what moves or systems are the most frequent at your level, and start with them. This way you can optimize your learning and put more effort into something you will face more often. Build the Black repertoire the same way.

The most common format for that is PGN (Portable Game Notation). You can use different software or websites for that; for example, ChessBase or lichess studies are the most commonly used tools. This way it will be easier for you to go over your opening preparation from time to time and update it if needed. But what openings is it better to play?

How do you choose an opening?

There are different ways to choose openings. One of the most popular ones is to copy the repertoire of your favorite player.

You can see that many people at different levels play the Sicilian Najdorf and the King’s Indian Defense as Black. This is what Garry Kasparov used to play.

Earlier, the same openings were favorites of Robert Fischer. The growing generations look up to the champions of their time and adopt their opening choices.

You don’t necessarily need to copy the elite grandmasters’ choices, though. Sometimes their lines are too hard to learn or memorize, so it makes sense to look for something easier. Your model player can be someone strong from your local chess club or any grandmaster or master with a similar style to yours.

You can also build your own unique opening repertoire.

Here are some questions that can help you choose openings:

Answer these, and you will see if you should play the Grunfeld Defense or it is better to stick to something similar to the London System.

Many people spend a lot of time choosing an opening. It is indeed not an easy task. But instead of wasting a lot of time on that, you should pick one and try it in blitz games. This way you will see if it is your cup of tea or not.

How do you learn an opening? What are the resources?

I recommend creating a database where you can put all the lines you are going to play.

It will make it easy to update and use for brushing up before the tournament. It is also especially helpful to have such notes when you need to prepare for your opponent during the tournament. You can look up their games in a database, see what openings they play, and prepare accordingly by using your notes.

During the World Championship match in 2018, a curious incident occurred.

In one of the frames, attentive viewers noticed sensitive information captured from the screen of a laptop. It is still not clear if this was leaked by accident or intended to be some sort of disinformation, but the video was unpublished quite soon.

What is important for our topic is that we can see how the World’s challenger’s openings files were recorded and structured. Look at the picture below: every important line is saved as a separate chapter; a lot of different ideas are covered; everything is clearly named, making navigation easy. 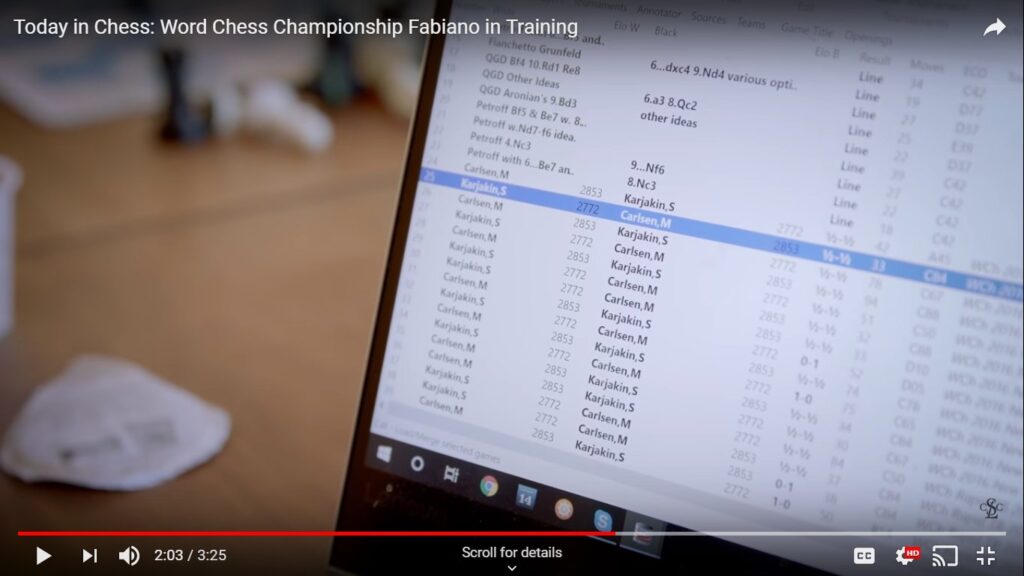 You can start creating such files for yourself too.

Fill them with lines from additional resources or find the moves on your own with the help of an engine. You should search for recent theoretically important games and look for interesting ideas there. Choose the games you like and use the engine to see how to reply to your opponent’s possible moves.

Looking for more info on picking the best openings to suit your style? Here is a short guide for you.

This is a lot of work, but it is rewarding.

The faster way to form the basis of your repertoire is to use books and video courses on openings. This way you get to reap the benefits of the work done by masters or grandmasters.

Moreover, their explanations can help you understand the nature of the positions better. Go over the suggested lines diligently and try to understand the reasoning behind the choices.

Pure memorization of moves can be useful in some situations, but it is much better to focus on the ideas and plans.

And don’t forget to follow the top Grandmaster’s games. I will give you a few to get started: see the best games here and here.

Practicing your openings is vital. It helps you memorize the lines; play out the arising middlegame and endgame positions. Moreover, this way you can see what you understand well and what needs to be learned better. Sometimes it happens that you still can’t play an opening successfully. In this case, you either study it more or try a different opening. Possibly this one just doesn’t suit your style. You can get back to it when your overall chess understanding gets better.

Want a special hint? Work on your Pawn Structures! Here are the 10 reasons why you should study pawn structures.

Many players can’t decide whether they should learn a new opening or dive deeper into their current one. If you have a broad repertoire, you are less predictable and get to play different kinds of positions. On the other hand, if you play the same openings over and over, you will understand them well and feel in your element. For example, Robert Fischer played the same openings almost exclusively.

He knew them perfectly well and wasn’t afraid of his opponents’ opening preparation. In recent times, Maxim Vachier-Lagrave was the most notable adherent to this approach: as Black, he has been playing the Sicilian Najdorf and the Grunfeld Defense exclusively. Both approaches have pros and cons. Choose the one that you like more.

But it is good to have at least some variety. Why? See below.

What if you must win, but your openings are rather drawish?

What if it is the other way around and you need a safe draw, but your openings lead to very unbalanced positions?

Or maybe your lines are too complicated for blitz or rapid, and it is better to play something else in short time controls. The more openings you can play, the more unpredictable and universal player you become.

Try different styles, and you will see the other side of chess; it will enrich your understanding of the game.

It is not an easy task to learn and understand chess openings properly. But it will definitely pay you back in your next tournaments.

Looking for a solid and easy-to-learn opening preparation for White?

Related Products
4 4 votes
Article Rating
Login
0 Comments
Inline Feedbacks
View all comments
Join the FREE Road to 2200 Masterclass (and learn how to Attack Like a Chess Master)
We value your privacy
Supercharge Your Chess in 21 Days!
Join Academy Today!